10 Best Jiraiya Tattoo Ideas That Will Blow Your Mind! 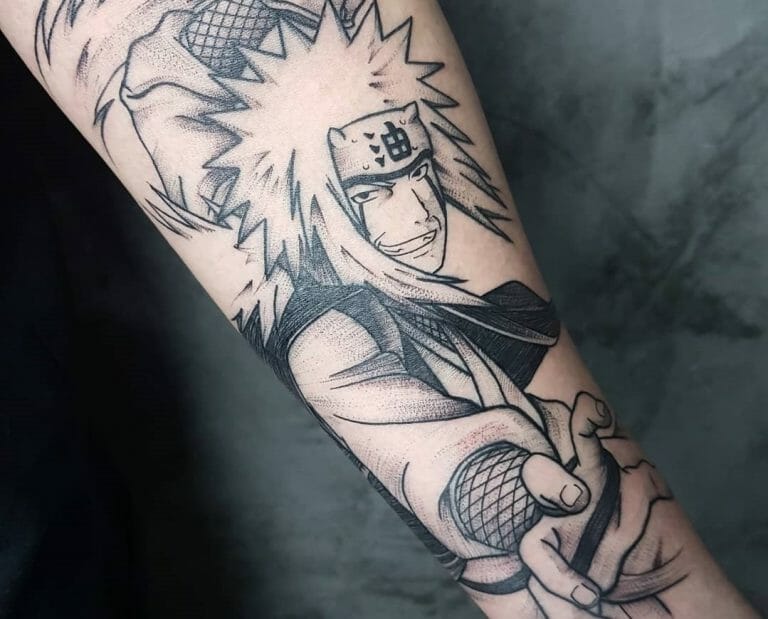 Thinking about your next anime tattoo? Here we have for you a list of the best Jiyaiya tattoo ideas that will make all the fans of Naruto cheer up!

In the whole series of Naruto, Jiraiya is one character that everyone admires.

Although on the surface, he might seem like a bad influence, it is actually him that turned out to be one of the best father figures of Naruto. He taught him everything he knew, and even passed on his philosophies to him, which he to date lives by.

Not only that, but he actually paved the way for what the village has become in recent years. He also either personally trained or was a big influence in the lives of some legendary Leaf Shinobis. Jiraiya even went as far as taking care of and training some orphan children in a war-ravaged Hidden Rain, when others refused to. So it is only obvious, that fans of the show and the man himself, will try to honour this legend in some way. Well, what could be a better way to honour him by getting a tattoo, right? So, if you are one of those people, or if you are simply looking for your next anime tattoo inspiration, you have come to the right place. Go through this list, and you will surely find your best match.

Jiraiya was one of the very few who were able to master the Rasengan. This tattoo is a tribute to the master who showed that everything is possible if you just believed in yourself. For all fans of Jiraiya-sama who live by this philosophy can choose this to show that you too possess that unwavering and unbreakable spirit.

Jiraiya was not only Naruto’s sensei but also his godfather. He even gave him his name after the protagonist of his book. This is one of those relationships of the series that touched everyone’s hearts. If you are a fan of this great sage, and his world-saving disciple, then this tattoo is possibly the best way to show it.

The Sage Mode On A Dagger Blade Tattoo

Even though he comes across as an easy-going and, pervy old man, there are very few people who come even remotely close to his dagger-sharp intelligence and fighting spirit. So, if you want a unique tattoo that would show the real depth of his character a dagger is the best way to go. All the people who like to take it easy, and hide their real depth of character behind silly tricks and charming smiles, this is the perfect way to tell the world who you really are.

So much of Jiraiya’s life was shaped around the prophecy the great Toad Sage made at Mount Myoboku about the child of prophecy. Only the twist was, there were two children of prophecy, one, Nagato or Pain, who attacked Jiraiya and wanted to destroy the whole world, and the other one, Naruto, who saved it from the impending doom. By the twist of fate, both were trained by him. If you want to portray how two people can have completely different journeys even if the starting point is the same, this could be your way to show it.

This epic tattoo is an attempt at honouring the best ones who took on the worst of it all to save the place and people they held dear to them. From a very young age, none of them wavered or backed away from the challenges or even shied away from going to the extreme to establish peace and stabilize the Shinobi world. If you are someone like that, this tattoo must be the one for you.

The Beautiful Life Of The Pervy Sage Tattoo

This beautiful tattoo portrays the three stages of Jiraiya’s life, the child, the adult and the old man who gave his life to protect those he cared for. This tattoo goes on to show how far you can go, if you pick yourself up from the mus and push through, never giving up on life. If you feel that this speaks for you as well, then this master Jiraiya tattoo is for you.

Gamabunta was not only Jiraiya’s summoning animal but also his lifelong friend. They grew up together and relied on each other in times of need. They had a friendship that defied the odds and went on strong for as long as he was alive. If you have a friend like that, then this Jiraiya frog tattoo could be your way of honouring them.

Rasengan is a powerful Jutsu on its own, but on Sage mode it definitely hits different. Just like this tattoo, with the portrayal of a fierce and dramatic full-fledged Sage mode with Papa Frog and Mama Frog on his shoulders. When you are talking about Jiraiya’s power, it does not get better than this. fans of the show who want to portray just how fierce they can get, if need be can get these types of Jiraiya tattoo designs.

The three members of the former team 7 of leaf, the Legendary Sannin, Jiraiya, Tsunade, and Orochimaru are depicted in this tattoo beautifully. They were the epitome of knowledge, power and leadership in not only the past but were inspirations for future generations. They also balance each other out in ways that are needed from true friends and teammates. If you have a squad as eccentric as them, this Jiraiya tattoo can be your way to offer them their due honour.

The Toad Sage And The Hokages Of The Leaf Tattoo

This is a man that believed in himself and was one of the major links in establishing the future peace era. He trained two of the Leaf’s legendary Hokages when a lot of them thought all he will ever be able to do is hang around some toads. He was game for all kinds of challenges, and even when his own student attacked Jiraiya, he deemed it more important to leave behind a sign for victory at the expense of his own escape. This tattoo shows the beautiful bond between a master and his students, and for all fans of the show for whom he became a master as well, there are not many other accurate ways to show respect to this Toad Sage.

Remember to get a tattoo that matches your personality well, because they make the first impression wherever you go. And, if you are still confused, we have some more ronin-based suggestions for you here: