101 Best Jason Voorhees Tattoo Ideas You Have To See To Believe! 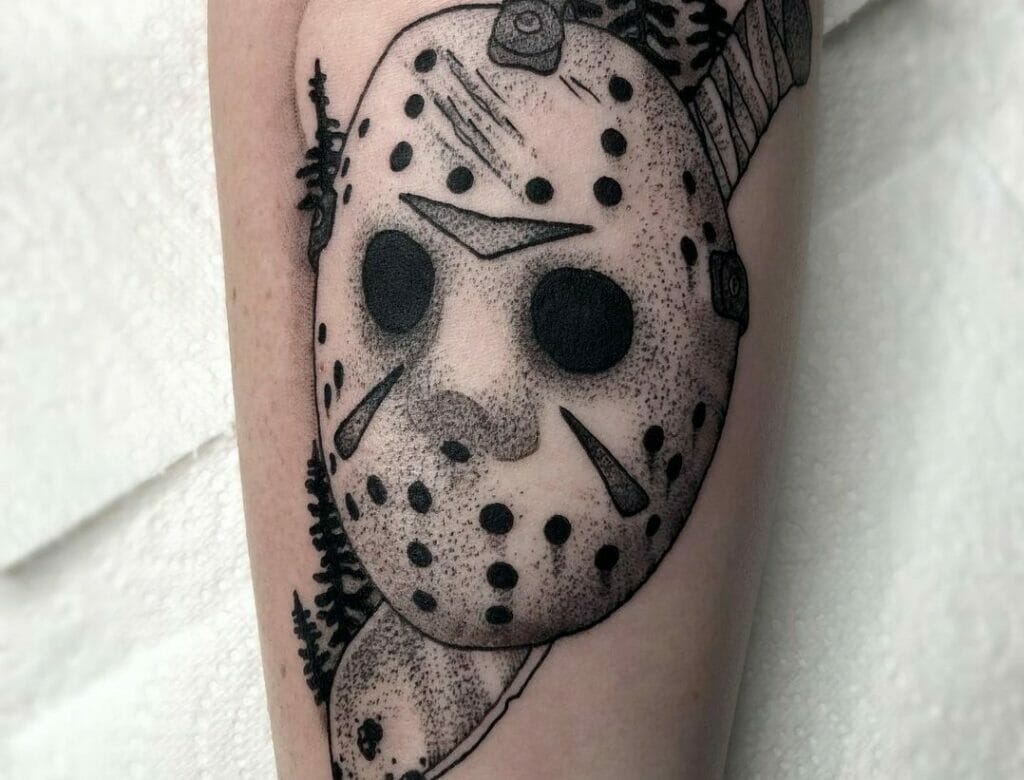 If you are looking for an intriguing Jason Vorhees tattoo design for your next ink then here is a list of ideas that can get you inspired!

Jason Voorhees tattoo is symbolic of mystery, rage, and revenge.

Jason Voorhees is an iconic fictional character who first appeared in the horror movie Friday the 13th that was released in the year 1980. Tattoos of this serial killer have been popularised by the fanbase of this horror film.

Jason Voorhees has been a victim of bullying in his teen years and later turns into a monstrous villain to avenge the death of his mother. He puts on a hockey mask to hide his true identity which has become the most popular theme of Jason Voorhees tattoo designs. Apart from keeping his identity a secret, he also wears this mask to hide his facial deformities. He uses his machete, axe, and various other tools to carry on his mass murders in Camp Crystal Lake.

You can portray this masked murderer in a multitude of ways and pair it with other characters from Friday the 13th. Take a look at these stunning Jason Voorhees tattoos and pick one that touches your soul.

This elaborate sleeve tattoo consisting of a realistic portrait of Jason Voorhees is bound to catch your attention. The detailed shading in black ink has been done with perfection throughout the arms of the wearer. The smaller design at the bottom portrays the antagonist holding a machete in his hand. The red ink adds creative detailing to the design by creating a contrast.

The famous mask worn by Jason Vorhees has been portrayed with a unique twist in this tattoo design. The incorporation of a colour gradient on the iconic mask looks absolutely brilliant. You can alter the size of your design or pick colours of your choice to create your unique Jason Voorhees tattoo art. You can ink this design on your arm like the tattoo shown in the picture.

Jason’s mask is imprinted on his machete in this remarkable tattoo design inked on the arms of the wearer. The shading in red ink around the weapon enhances its appeal even more. Apart from your arm, you can also place this design on your leg.

Have you ever thought of portraying this prolific serial killer as a quirky cartoon character? Well, this design might change your perspective and lighten the mood with its adorable features. It seems like he is running towards his next target with his small machete. You can fit this funny animated design anywhere on your body according to your preference.

If you are in search of a Jason Voorhees tattoo in monochrome then this one can be your perfect choice. The number 13 imprinted on the side of the mask denotes the 1980s horror film Friday the 13th. Moreover, the floral detailing on the side of the design adds a touch of royalty to the design. You can also add your favourite Friday the 13th quote to give a personal touch to your Jason Voorhees tattoo.

The realistic shading on the mask has definitely brought it to life! Moreover, the splatter of blood around the mask brings an edge to the design and makes it stand apart. Perhaps, the blood signifies the crimes committed by this daunting serial killer who is known to kill over 200 people. You can place this stunning piece on your leg or back where there is ample room to ink the details.

Here, Jason Voorhees is wearing a suit with his machete tucked inside it. The impressive play of contrast adds a touch of realism to this tattoo art. His dreadful eyes are piercing out of his mask which is making this design look even more intriguing. The phrase ‘Friday the 13th’ is inked at the bottom of the design in red. The entire tattoo has been portrayed on a black frame to further enhance the contrast.

The artist has made use of a diverse colour palette to portray the stunning Jason Voorhees mask in this detailed tattoo design. The floral frame outlining the mask brings depth to the artwork. The glint in the eyes of Jason Voorhees is visible through the eye hole of his painted mask. Place this design on your thigh like the one shown in the picture and flaunt your Friday the 13th tattoo in style.

Jason Vorhees Tattoo With A Rose

If you wish to ink your Jason Voorhees tattoo with a touch of femininity then you can get inspired from this design. This design portrays the infamous serial killer with a beautiful rose in a single frame. The intricate detailing of the design combined with the vibrancy of the rose tattoo creates a stunning visual. The mask is drawn in a copper tint with black shading. You can ink this statement piece on your upper arm.

Here, the dreaded serial killer is holding a blood-soaked axe in his hand. It seems like the antagonist has been on a killing spree. The splash of colours drawn in a watercolour inking style creates a stunning backdrop in this tattoo art. Ink this Jason Voorhees design to display your horror movie fandom.

What is the meaning behind the Jason Voorhees tattoo?

The Jason Voorhees tattoo is a popular design that symbolizes fear, strength and determination. The character of Jason Voorhees has become an iconic horror figure in pop culture, so those who choose to get the tattoo are expressing their admiration for this antihero. The imagery associated with the character often depicts him wearing a hockey mask and brandishing a machete, which people who choose to get the tattoo often incorporate into their design. To many, this tattoo represents an unyielding will and determination to never give up in times of adversity. Additionally, some have chosen to get the Jason Voorhees tattoo as a tribute to those dealing with terminal illness or other difficult situations. No matter the motivation for getting the tattoo, it is a powerful design that carries deeper meaning and significance to those who choose to wear it.

How popular is the Jason Voorhees tattoo?

The Jason Voorhees tattoo has become increasingly popular over the years, becoming one of the most iconic horror tattoos in existence. Fans of slasher movies, horror films and pop culture have embraced the image as a symbol of strength and determination. Those who choose to get the tattoo often incorporate elements from the character’s appearance into their design, such as the hockey mask and machete. Additionally, fans of the character often choose to get a tattoo of his face or name to commemorate him. The Jason Voorhees tattoo is a powerful design that carries deeper meaning and significance to those who wear it, making it one of the most popular tattoos in pop culture.

Who usually gets the Jason Voorhees tattoo?

The Jason Voorhees tattoo is popular among many different types of people, from horror movie fans to those who are looking for a powerful design with deeper meaning. Many have chosen to get the tattoo as a tribute to those dealing with terminal illness or other difficult situations, while others have gotten it simply because they admire the character’s strength and determination. Additionally, some have chosen to get the tattoo in order to display their admiration for slasher movies or horror films. Ultimately, the Jason Voorhees tattoo has become an iconic design that carries meaning to many different types of people.

How much does a Jason Voorhees tattoo cost?

The cost of a Jason Voorhees tattoo will vary depending on the size, complexity and detail of the design. Generally speaking, tattoos can range anywhere from $50 to several hundred dollars. The average cost of a small tattoo is typically around $100-150, while larger designs can be upwards of $200 or more. Prices will also vary depending on the artist and the shop. It is important to research different artists and shops in order to find a quality one that fits your budget. Ultimately, it is important to make sure that you get a tattoo from an experienced artist who knows how to properly execute your desired design.

How painful is a Jason Voorhees tattoo?

The degree of pain associated with getting a Jason Voorhees tattoo will depend on the size, complexity and placement of the design. Generally speaking, tattoos are not overly painful and can range from mildly uncomfortable to slightly irritating. Pain tolerance does vary from person to person, but most people report that the discomfort is bearable. Additionally, some areas of the body are more sensitive than others and may be more painful to tattoo. It is important to communicate with your artist about any areas that you think might be too painful for you. Ultimately, it is important to keep in mind that getting a tattoo is an investment and should be taken seriously.

How long does a Jason Voorhees tattoo take to heal?

A Jason Voorhees tattoo typically takes about two to three weeks to heal, though this can vary from person to person. During the healing process, it is important to take extra care of your tattoo in order to ensure proper healing and prevent infection. This includes avoiding direct sunlight for at least four weeks, keeping the area clean and dry, and applying a thin layer of unscented lotion to keep the tattoo from drying out. Additionally, it is important to contact your artist if you experience any signs of infection or irritation. Ultimately, taking proper care of your tattoo during the healing process is essential for optimal results.