10 Best Jason Mask Tattoo Ideas That Will Blow Your Mind! 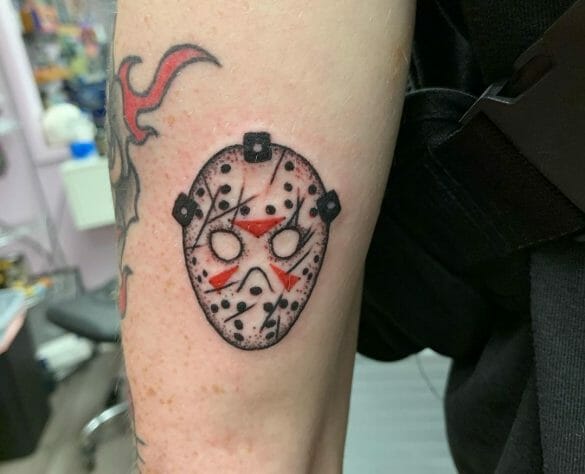 Are you a huge fan of the cult classic horror movie franchise ‘Friday The 13th’? Then here are some amazing Jason Mask tattoo ideas for you to check out!

The Friday the 13th franchise is one of the most well loved and famous horror and slasher movie franchise in Hollywood.

The movie series follows the main antagonist Jason Voorhees who attacks and kills people around Camp Crystal Lake. He has been portrayed by various stuntmen and his facial features have undergone several changes throughout the movies.

However, the most iconic representation of Jason Voorhees has to be hockey goaltender mask which Jason is seen to wear. The masked persona of Jason was introduced in Friday the 13th movie which released in 1982. In the subsequent films, he was also given superhuman strength that helped him take down his targets easily and then kill them. If you love slasher films, then Jason Voorhees will definitely stand out as one of the most famous characters along with other well known villains like Freddy Krueger.

Jason Mask Tattoo Designs For Fans Of ‘Friday The 13th’

Jason Voorhees is an undoubtedly iconic character who is almost an undead killing machine. However, some of the later Friday the 13th movies also explore his traumatic history to make viewers understand why he does what he does, almost making him an anti-hero in the process. Consequently, if ‘Friday the 13th’ movie series is one of your most favourites, then you should definitely look at Jason mask tattoos or Jasaon Voorhees tattoos for yourself!

Half Sleeve Tattoo Ideas Based On ‘Friday The 13th’

The iconic villain of the ‘Friday the 13th’ film franchise is a physically disfigured boy who has a traumatic past. To hide his facial features, he wears a hockey mask that has since become associated with Jason Voorhees. If you want a larger black and grey tattoo based on jason Vorhees or the film series, you can also get a half sleeve tattoo on your arm like in the image above.

Here are some more amazing half-sleeve tattoo ideas for you to gain some inspiration from.

Fans of the ‘Friday the 13th’ movies would know the importance of Jason Voorhees and how he is the main antagonist. Thus, if you are looking for dark and edgy tattoos based on famous horror films, you can definitely get a Jason tattoo or Jason mask tattoos. The iconic goalie mask was first introduced in the Friday the 13th part III movie that was released in 1982. In those movies, we also see how Jason Voorhees was a mamma’s boy who later terrorises the people who come to Camp Crystal Lake with a machete. You can ask your tattoo artist to show you a Jason mask tattoo drawing to decide as well.

Jason Voorhees was a mamma’s boy initially who later became faceless mass murderer who haunts Camp Crystal lake. Thus, if you want a large and elaborate tattoo based on your favourite slasher film, you can also draw some inspiration from the image above. A hockey mask black and grey tattoo is probably one of the most popular Jason Voorhees tattoos.

If you love films where the main character or antagonist goes killing sprees motivated out of revenge, then you would definitely love the ‘Friday the 13th’ series. This series is popular throughout the world as it explores the sad past of Jason Voorhees who had drowned in the lake beside the woods due to inattentive lifeguards. Later, he becomes a mass murderer who is always seen to be covered in blood. Consequently, if you want a gory and bloody Jason mask tattoo, you should definitely ask your tattoo artist to add lots of bright red coloured ink!

The sad story of Jason Voorhees is well-known to all as he cannot speak while he is a tragic victim of negligence. However, he comes back as a superhuman killer who cannot speak but haunts his targets. If you want to pay a tribute to Jason Voorhees, the silent killer from the ‘Friday the 13th series, then you can definitely get a Jason hockey mask tattoo along with a machete. In addition to that, you can also add some colourful flowers to the tattoo to make it more elaborate and attractive.

If you are someone who likes to experiment and play around with their tattoos, then you can also base your Friday the 13th tattoo on another popular culture character like Minnie Mouse as the wearer has done in the above picture. The wearer has swapped Minnie’s face with the villain character Jason Voorhees who had tragically drowned, only to resurface as a killer.

If you want to look at tattoos based on more popular action movies, here are the best Evil Dead tattoo ideas for you to check out.

Funny Jason Mask Tattoos That Are Perfect For Halloween

If you are looking for some funny and hilarious Friday the 13th tattoos, then you can also put your own unique interpretation on the Jason mask tattoo. Although we normally see a Jason mask tattoo along with his famous machete, you can also use the features of the mask in a pumpkin like the wearer has done above just in time for Halloween!

If you are not a fan of large, elaborate tattoos, you can also opt for a small Jason mask tattoo. This kind of a Jason mask tattoo will be perfect for those who have a minimal and simple aesthetic and do not like flashy tattoos.

Jason Mask Tattoo Designs That Are Easy To Place Anywhere

If you want to get a Jason Voorhees mask tattoo but are worried about where to place it, the solution is quite easy! A traditional Jason mask tattoo is quite easy to place anywhere on your body depending upon the size and design. Therefore, you can place it on your chest, back, arm, foot or shoulders.

In 2021, more and more people are getting fun and bizarre tattoos based on their favourite popular culture references. Therefore, if you are wondering how weird it would be to get a tattoo based on Jason’s mask, don’t be afraid! Go ahead and get a fun Jason mask tattoo that works for you.