10 Best Japanese Thigh Tattoo Ideas That Will Blow Your Mind! 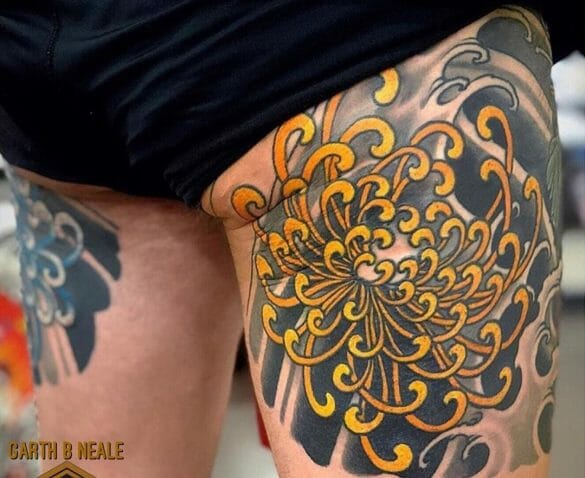 Are you a big fan of Japanese art and culture? Then check some of these Japanese thigh tattoo designs for your next tattoo idea!

Japanese tattoo designs might be older in their history than you would imagine.

Japanese style tattoo, just like Japanese artwork, is not only a treat for your eyes, but convey a deeper meaning through a visual picture. Japanese tattoos are known for their detailed designs.

Did you know tattoos are as good as a taboo in Japan? This is because of the Yakuza tattoo. Yakuzas are Japanese mafia, typically identified in the Japanese society with their body art tattoos. We cannot deny the sleeve tattoos look spectacular though. Despite this, we can find a distinctively Japanese style even in tattoo designs. Traditional Japanese tattoos, for example, the Irezumi tattoos, one of the most popular Japanese decorative tattooing was in the past completely forbidden by Samurai warriors in Japan. Because of the prevalence of Confucian teaching, they considered tattoos illegal and sinful, since it was a body modification.

Do you want a tattoo badly but are terrified of needles? This might be a good idea for a first-timer. Even though the frame is tiny, the tattoo artist inserts various intricate details into it. The most prominent figure in it, is the Kitsune or a mythical nine-tailed fox, a part of the Japanese culture. Since these creatures are cunning, they usually stand for intelligence. While it is nighttime, the moon is not the usual white. Instead, a blood-red moon is portrayed in the frame.

Waves and flowers are about the mythical creature, creating a sense of mysticism about the tattoo. The frame is set against the background of the starlit night. Even though it is small, do not think you can get this tattoo done with a quick session.

More used to seeing white and orange Koi fishes? This one is a black Koi fish tattoo and it is just as stunning. Not only is the anatomy and scales inked with perfection, but the bold red spot is distinguished, which helps to recognise this as a Tancho Koi fish. Koi fish tattoos represent perseverance. Hence, the tattoo can be a reminder to keep moving forward no matter what the next tide brings. Koi fishes with their sheer willpower, swim against the tide, which made them a symbol of tenacity and determination.

A dragon tattoo in the form of a crimson coloured spirit can be seen wrapped around the Koi. In fact, in the Waterfall Legend, gods turn the Koi fish into a golden dragon for its perseverance. Hence, the two together make the imagery complete. This tattoo begins from the lower leg and runs up to the thigh.

Similarly, the other leg has a hannya mask. Hannya tattoos represent devoted love and passion, worn usually by women, especially those with a history of unrequited love. With various figures, the sleeve tattoo can represent snippets of Japanese culture through folklore and history. If you want to get this colourful tattoo, be sure to dedicate your time and money to the best tattoo artist you can find.

We have a crossover of a demon Geisha here with the typical Japanese snake tattoo, giving this neo-Japanese tattoo design a whole new edge. Geisha tattoos will normally signify beauty and mystery. Although, being a demon Geisha, the same meaning stands modified. The girl stands covering her face. The only feature that can be seen is her opaque but glistening eyes. To give the figure a realistic effect, highlighting has been used to give a porcelain skin effect. While Geishas usually are portrayed as demure, this Geisha holds a katana in her hand, ready to kill. The combination of the Oni horns with the flower on top of her head, makes this duality stand out.

The Japanese snake tattoos are inked as a symbol to ask for protection against bad fortune. In essence, therefore, they are thought to bring good luck. The two-tone palette of this tattoo helps to accentuate the typical grey tattoos with scarlet red.

If you are obsessed with Japanese sleeve tattoos, this is one of those Japanese tattoo ideas which won our hearts. Of course, Irezumi, the traditional Japanese tattoo style has been used for this piece as well. The element which makes itself apparent in this tattoo is the Namabuki. Intentionally kept grotesque, these tattoos display courage by invoking the Samurai warrior ethics.

The snake, which also signifies wisdom and strength, quite appropriately makes its place in the leg sleeve tattoo. Also, a peony tattoo can be found, which is inked as a motif for prosperity. Bold and vibrant colours are used to make this Japanese style tattoo even more eye-catching than it already is. Start searching for really experienced tattoo artists if this tattoo art caught your fancy.

Instead of plain Japanese cherry blossom tattoos, here we find some scenic beauty in the body tattoo. Cherry blossoms depict transience, because of their short life. The flowers serve as a reminder to seize the time. The Japanese dragon tattoo is not hard to notice in there. Dragons in Japan are seen as benefactors, who symbolize the bravery of a person. Together, asking the person to be brave enough to grab their opportunity. A Buddha-like figure can also be spotted in the sleeve tattoo, though with the odd addition of a crown on their head, like that of a king. With nothing but the grayscale, the traditional Japanese Pagoda is made to look very realistic.

Are you an ardent fan of Ghibli movies? Then this dragon tattoo hardly requires any explanation. The dragon inked is the character Haku from the movie SPIRITED AWAY. Staying true to the original design to a large extent, the dragon is inked in the style of the common Chinese dragons. The cherry blossom with our white dragon reminds us of one of the most vivid and breathtaking scenes from the movie. The tattoo is spread out on the skin from the upper thigh till the knees. So, make an early appointment if you want to get the bulk of the work done in a single day. We love the colour play of turquoise, pink and white, which, with their bright hues, teleports us back to the animation. Are you also searching for who you are like Haku?

Yokai is a supernatural entity or spirit which is part of Japanese folklore. Most of them are usually known to be harmful to humans. This Yokai similarly, belongs to that kind. In Japanese, she is called ‘nure onna’. She has the body of a lady, with the torso of a snake as seen in the tattoo. While this Yokai in Japanese style is not that gorgeous, in the tattoo, she is dressed as a Geisha, out to dupe innocent people.

This Yokai is known to trap and devour humans, and in the tattoo, she is in the process of such a deed, holding someone captive with her tail, as she peers into her captive. The facial expression on her face though, is much more expressive here, than a senseless violent being, with only one objective. The details of the anatomy, from the legs to the scales on the body, are breathtaking.

Foo dogs, known by various other names, are mythical Guardian lions. These creatures symbolise success and fortune for a person since their responsibility is guarding. Instead of the typical colourful guardian lion, here, we have a Japanese mask. The split effect of the mask adds that sprinkle of twist to the tattoo design. From inside the mask, flowers are seen bursting out. The detailed work on the mask is truly impeccable, which makes even some of the masks with a vibrant palette fall short. Using fine lines, this tattoo will require you to summon your patience and strength to sit through the entire inking process.

Onis are Japanese demons, set apart by single, or double horns on the head, with really long nails. A Japanese word is inscribed with golden, on the Oni mask. The mask is split in half, and from the inside, bright red chrysanthemums are popping out. These flowers symbolise generosity and determination. This can be a good reminder to keep a strong and positive outlook. The mask is meant to ward off bad luck, and evil spirits, so no one can mess with the positive energy.

From Japanese dragon tattoos to Japanese flower tattoos, the tattoo styles, as well as the elements involved, are as versatile as they can get. Hence, go explore for the best Japanese tattoos.

Are you sad it got over too soon? Because we are. So, we must arm you with a few more Japanese tattoo designs before we can say goodbye: