10 Best Japanese Tattoo Background Ideas That Will Blow Your Mind! 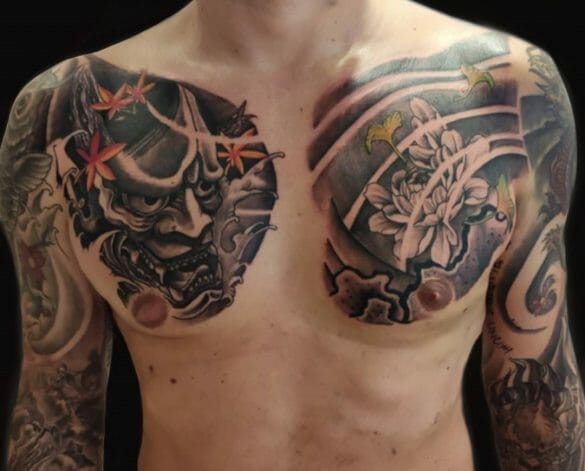 Traditional Japanese tattoos are the most recognizable and by far the most popular tattoo styles.

Initially, according to the Japanese culture, getting a tattoo was a form of punishment for people who had committed a crime or were slaves. The tattoos clearly referred to the status of the individual in Japanese society. During the Edo period, traditional Japanese tattooing was banned, however, in 1948, the prohibition on tattoo culture was lifted and anybody was free to get one.

Japanese tattoo designs vary in size and colour. There are also various symbols or motifs with specific meanings that are appreciated all around the world. People have constantly been amazed by the tattoo art in Japanese style.

Japanese tattoo background patterns are a very essential part of a Japanese traditional tattoo. It usually spreads across the body, on the back or the chest area, or is drawn as a sleeve tattoo on the arm or leg. Each tattoo is deep and meaningful. Traditional Japanese tattoo artists learn and use this form of body art all around the globe.

Here we have curated a list of the 10 best Japanese background tattoo patterns for you to choose from!

Japanese dragon tattoos are one of the most popular tattoo designs. Dragon tattoos, especially the Japanese dragon symbolize strength, blessing, wisdom and mostly the force of good. The dragon is one of the most significant mythical creatures in Japanese culture. These tattoos can vary in size and design. In this particular traditional Japanese tattoo design, you will notice that the art starts from either side of the chest and extends into the arms like a sleeve. This tattoo not only consists of the beast, but it also has other designs like a Hannya mask on the right, a geisha tattoo on the left. The tattoo outline of the dragon and others is in black and the background has been filled with shades of black and grey. This tattoo is surely a bold choice, but it is a combination of some beautiful and meaningful designs.

According to Japanese culture, the phoenix symbolizes imperial households. That is why Japanese phoenix tattoos symbolize the imperial characteristics of Japanese people like justice, obedience, sun, fire, etc. In other cultures, a phoenix symbolizes harmony and good luck. The tattoos are usually big because of the spread-out wings of the bird, the long neck, and more distinct features. This is the reason why this tattoo is usually made on a larger surface area like the back or the chest. You can also opt for a sleeve tattoo that will look like the bird is flying around your arm. The outline of this tattoo is done in black ink, however, you can use different shades of bright colours to give this Japanese art more depth.

This Japanese traditional tattoo design is of a snake or a “hebi” which is widely popular. According to Japanese tradition, snakes symbolize rebirth, change and transformation because the most significant quality that they have is shedding skin. They can also be seen as a symbol of good luck. In this tattoo design, the snake is coiled around a blue-purple peony flower which is considered the king of flowers in many cultures. Its symbolic meaning of love and prosperity is what makes it a popular tattoo choice. The swirls of black and grey in the background give this tattoo a 3D effect. The snake looks different as it is made with striking colours of red, yellow, orange and spots of brown. A fine piece of tattoo art by the artist!

“Maneki Neko” means “beckoning cat” according to the Japanese people. This creature is meant to bring lots f luck, fortune as well as wealth to the one who adorns this tattoo. This is one of the most famous Japanese mythical creatures. It is so famous that you have probably noticed this cat in your favourite Japanese restaurants, usually holding a coin and has pointed ears. The belief in this creature is immense. The cat is the main feature of this design, it is highlighted by the background work on the entire body and the blue lotus-like flower it is sitting on. the lotus means that you are on a path to becoming a better person. The whole tattoo could mean that you want to be a good person who has good luck and fortune in their life.

This is a very good example of a traditional Japanese tattoo design. In Japan, the Oni mask tattoo is commonly worn by those people who believe in the spirit world. Mostly Oni has a negative connotation, however, in some folklore Oni are seen as good and protectors from evil. Tattooing such a design could be a bold choice but its meaning should keep you going. This particular design is a black and gray Japanese background tattoo with the eyes and teeth of the demonic beast in yellow. On the side, there is a purple flower that adds to the charm!

This is one of the most sought after Japanese tattoo background designs. It may look complicated but the design is very simple. This design is wrapped around the arm of the wearer as a sleeve. It shows running water and lotus are grown in the middle. The lotus flower represents purity as they usually grow out of a muddy, murky pond. They are a symbol of spiritual awakening, truth, faith and harmony. Here they are paired with a stream of water, but they go very well with the koi fish also. Koi fish tattoos are very famous. The color scheme of this tattoo is black and grey, however, you can add bright colours according to your choice!

This is a beautiful template of small Japanese tattoos. Traditionally a Japanese background tattoo is a tattoo art that is made on a large surface, like your back or your chest. However, this tattoo is made on the socket the joins the shoulder and arm. There are beautiful black swirls that make the background and pretty red flowers that are set in the middle. The flowers are “Tsubaki” which are symbols of love as well as noble death among the Japanese warriors. If you are looking for some Japanese tattoo ideas, this should be it!

This is one of the most famous traditional Japanese tattoos! In Japan, the cherry blossoms, or the Sakura is a very prominent flower known for its beautiful colour as well as its beauty. It is a reminder of love and transience. They are the perfect metaphor for the passing of time because they have very short lives. Tattooing this design could be a constant reminder that life is short and to live every second of it like it is your last. In the above design, the tattoo is wrapped around the arm like a sleeve. The background is black so that the pink flowers are properly highlighted.

In Japan, this design is the pinnacle of traditional tattooing. It means intense passion and love that is associated with the jealous women of that society who had gone through betrayal. This tattoo has a layered meaning and resonates with someone who tends to give everything they have into a romantic relationship. In this design, you will see a person wearing the Hannya mask angrily charging towards something. Around this person, there are swirls of black and purple that help in highlighting the mask. You can add colours of your choice to this design to make it more personal!

The Geisha And Dragon Tattoo

A Japanese tattoo background meaning differs from tattoo to tattoo. This design is similar to something that you might have already seen. The geisha on the top left is a symbolism of decline beauty and grace. The same way a dragon also symbolizes grace in addition to strength and intelligence. This tattoo is very intricately designed on the left side of your chest and goes done to the waist-hip region. The upper part extends onto the arm like an arm sleeve. Although this tattoo is only black and grey, you can use different colours according to your choice!

The meaningful designs are the reason why the Japanese tattooing tradition has gone on for so long. Here are some other inspirations for you to look at –

There are several Japanese tattoos that mean good health and a new beginning. It may be difficult to choose from so many options as body art is a big commitment. However, these beautiful options brought to you in the above-mentioned list may help you a little. Good luck!