10 Best Japanese Half Leg Tattoo Ideas That Will Blow Your Mind! 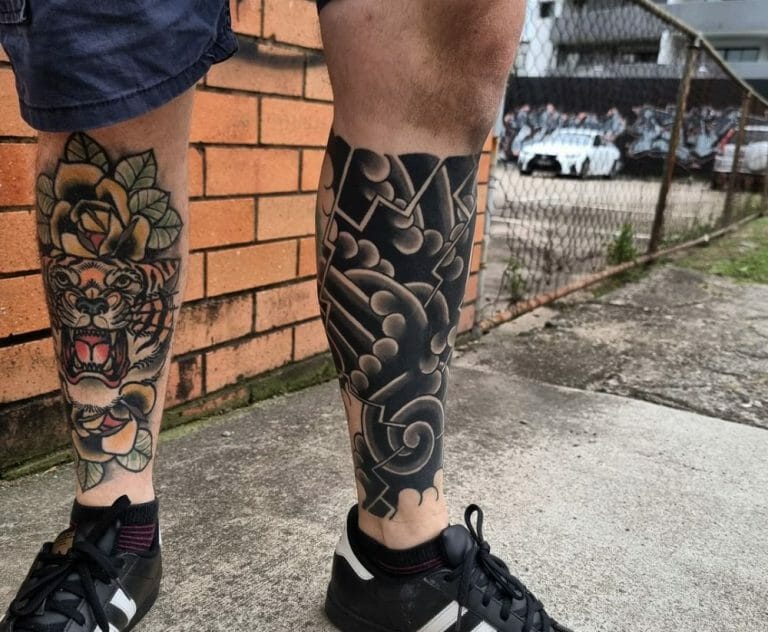 Japanese half leg tattoos have gained popularity over the years and if you are looking to get one, you have come to the right place!

Japanese tattoos are bold, unique, and colourful which have made them so popular and beloved across the globe.

Traditionally, Japanese tattoos are called “Irezumi” which generally means “tattooing”. It refers to inserting ink under the skin to leave a permanent mark.

Japanese tattoos have several different styles and variations. They are vibrant and expressive and have earned appreciation all over the world. Their colours and shading are so exciting and eye-catching. the most common designs in Japanese tattoos are made to honour their folklore which includes magical creatures like dragons, phoenixes, other forms of animals, nature, flowers and everything supernatural. The Japanese tattoo design is a piece of art very intricate and detailed and always has a meaning behind it. You can get a Japanese tattoo on any part of your body, but this article will focus on a half leg tattoo. Here is a complete guide to understanding the traditional Japanese tattoo design for your leg tattoo.

A tiger, just like the Japanese dragon tattoo has great significance to the Japanese. According to Japanese folklore, it governs the elemental forces of nature like rain and wind. They are seen as the rulers of the cosmos and the natural world. The pairing of the Japanese dragon and the Japanese tiger is believed to bring about blessings of rain and peace. The flying dragon and the prowling tiger came together to represent heaven and Earth. This particular tattoo shows a prowling tiger and is black and white. These are great half sleeve tattoo ideas!

This particular design is of a Japanese dragon tattoo and forms a half sleeve tattoo on the calf. The dragon symbolizes the ocean and has a large mouth. The strokes of the dragon are very intricate and the tattoo is filled with vibrant colours just like the traditional Japanese style. This form of Japanese art is one of the most famous designs and is loved worldwide. This is often chosen as a full-body tattoo but this one is great for a Japanese half leg sleeve tattoo.

Most of the Japanese tattoo meanings are deep and meaningful. They are not just simple Japanese designs. The Koi fish is a symbol of prosperity, luck and good fortune. It is also a face of perseverance and adversity. The Koi fish is also associated with the country’s national identity. This design is traditionally made with vibrant colours and is great for half leg Japanese art tattoo. It looks just as elegant.

In Japanese, Koi is called carp. There are many varieties of the Koi fish, but the original Koi carp was brought about in the 1920s in Japan. The Koi fish is usually set for decoration, not only in Japan but all over the world. Many people believe that keeping a Koi fish can bring you good luck and prosperity. This is a great idea if you want to get a Japanese traditional tattoo. This design of the Koi fish is more traditional than the rest of the tattoo designs because it is made with bright colours which is the actual colour of the Koi fish.

Baku is a supernatural creature that is a symbol of devouring dreams and nightmares. They have a long and rich history in Japanese art and folklore. The Baku recently appeared in Japanese anime and manga (a series of Japanese novels). The creature has the body of a bear, the head of an elephant, the tail of an ox. Its eyes are of a rhinoceros and it has the legs of a tiger. According to Japanese folklore, the tattoo of Baku plays a great role in keeping the nightmares away, very similar to the Japanese dragon tattoo. This traditional Japanese tattoo is inherently artistic and makes for great sleeve tattoo designs! It is one of the best leg tattoos made in the Japanese style. You can also add cherry blossoms to make this tattoo appear beautiful. However, this tattoo can not be considered a small tattoo.

Mirror Of The Soul

This makes for a great traditional Japanese tattoo. It is a combination of different concepts from Japanese folklore. In the culture, the mirror is a symbol of power, and are seen as a sacred object that represents God. This design shows the souls of different people. You will notice the large pieces of broken glasses that show the face of a woman and behind the mirror, you will notice the face of a beast. It shows the different sides of a person, both good and evil. It is a great piece of art that makes for great Japanese tattoo sleeve ideas.

A dagger or a “short sword” is a traditionally made Japanese sword that was usually taken by the Samurai or the fighters. It is a great sign of strength and power. It is also used in traditional martial arts. Many other cultures use the sword in many ceremonies and rituals. These tattoo designs are very popular amongst the Japanese people. The multiple themes offer deep meanings. These designs are great sleeve tattoo designs. The dagger in this Japanese tattoo is covered in beautiful flowers. You can make your own modifications to this leg sleeve tattoo by adorning the dagger with flowers of your choice!

A fan of Dragon Ball-Z will understand the significance of Vegeta, not only for the Japanese but for everyone who has ever seen the show. He is a part of a Japanese manga or novel that was appreciated by a lot of people and it managed to create a great fan following across the world. His character initially was a villain, then it turned to anti-hero and through the show slowly converted to the lovable hero. This is a little different from the traditional Japanese tattoo, it is a great leg sleeve tattoo design!

The money frog is often depicted as a large bullfrog with red eyes. It traditionally has 3 legs and usually sits on a pile of money. This money frog has become immensely popular over the last few years. People often believe in these frogs can bring them prosperity, success, wealth and loads of good luck. It also helps in protecting wealth from the evil eye. This Japanese theme half leg tattoo is usually made with bright colours all the time, but you could consider making a black and white tattoo that can have red eyes. It could make for a great sleeve tattoo!

The Japanese tattoo designs are inspired by their culture, art and folklore. The Japanese style is different from the rest of the world. They are usually significant to the positivity associated with your new life. They have become wildly popular all over the globe leaving people inspired. Although most of them are religious tattoos and can seem offensive to other cultures, they have deep hidden meanings and are wonderful designs!

Here are more suggestions for Japanese sleeve tattoo designs for men and women: