101 Best Japanese Geisha Tattoo Ideas That Will Blow Your Mind! 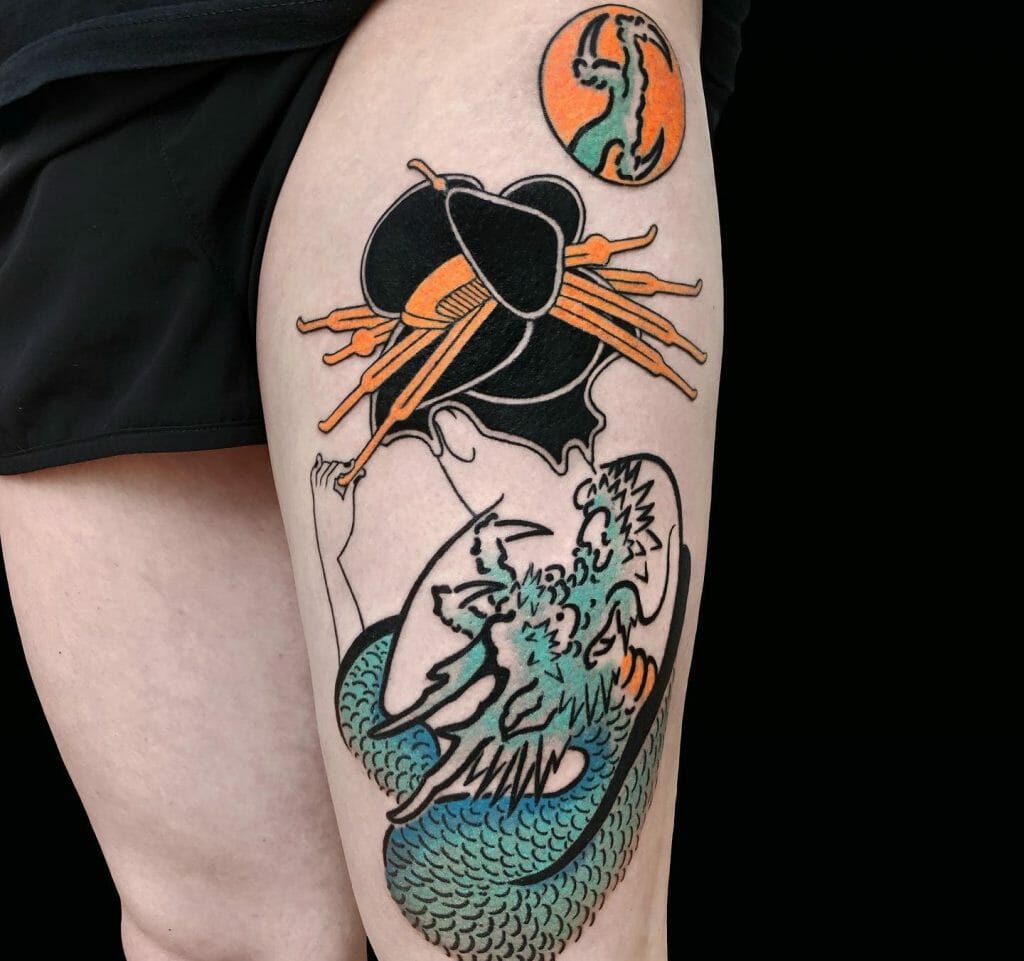 If you want to embrace the beauty of Geisha, belonging to the rich-cultured country, Japan, then we have the perfect Japanese Geisha tattoo ideas for you.

(These Japanese Geisha tattoo ideas will surely blow your mind!)

If you have some idea about Japanese culture, then you definitely must have heard of the term ‘Geisha’.

‘Geisha’ is a term used for women who are trained to entertain men. The first Geisha woman was Kikuya.

Geisha is a symbol of female empowerment; however, the first Geishas were male. But around 20 years later, female Geishas started coming in. Initially, the work of the Geisha was constrained to being an assistant to the ‘Oiran’, the high-priced and high-class courtesans of Japan. Oiran generally resided in the entertainment or pleasure quarters in Edo or present-day Tokyo. Courtesans always had a fear of Geisha stealing their customers, so strict rules were made which forbade Geisha from forming any intimate relations with the customers. They were even prohibited to sit near any guests.

As time passed, what once was an expensive entertainment site became more and more accessible, which attracted more customers than before. This change came with immense opportunity for Geisha as Geisha became a part of Japanese culture. Geisha meaning stands for Japanese hostesses. By the 18th century, Geisha became an undetachable part of Japanese culture. However, in Meiji Period, the demand for Geisha was higher, and their niche knowledge of hospitality and entertainment was widely popular. This period saw the demand for Geisha even among the government officials. But as the country involved itself in international warfare, the prestige, as well as the sole role of Geisha in the society, was threatened, and this started happening right after the Meiji period. But after World War II, as America tried to learn about the Japanese culture, the concept of Geisha started becoming misunderstood. They all considered that Geisha were also prostitutes, a clearly wrong concept. The true beauty of Geisha lies in their in-depth knowledge of the culture and tradition. Geishas were also good in conversation, which clearly separated them from prostitutes. In the post-war scenario, Geishas are the luxurious entertainer who performs various styles of art forms such as dance and singing, and some even played different musical instruments. Few intellectual and talented ones fill this culturally rich traditional role, and even in modern days, they are widely respected by all the people in Japan.

If you also have respect and love for this traditional Japanese culture and want to show people your admiration for the beauty of Geishas, then we have the best ten Geisha tattoos for you.

This Japanese-style Geisha tattoo has been placed on the forearm. In this Japanese Geisha girl tattoo, a girl is shown holding an ‘Ogi’, which is a Japanese hand fan, and a ‘Hannya’ picture on it which is a demon mask. This is a colorful tattoo with black color on most of it. The girl is wearing a flower as an ornament on her head which is of light blue color, and the Hannya has been inked with red color. There are also other colors incorporated in this tattoo design which have been inked very skillfully as well. This is a truly eye-catching tattoo with remarkable shading on its own, not to mention the color combination is also, of course, extremely unique. Among all the Japanese Geisha tattoos, this Geisha tattoo design is one of the most stunning ones.

If you want to admire the Geisha culture up close, none other than this tattoo can fill that desire.

Among all the Geisha Tattoos, this might be one of the unique ones. The representation of this tattoo carries a deep meaning, as Geishas also carried out assassination tasks. This tattoo is on the back and is a huge one. A spider is shown to be attached to the head of a Geisha woman who has four eyes. Such creativity can only be brought by true creativity and proper subject knowledge. The Geisha tattoo also seems to have fang and poison that is dripping down the spider’s mouth.

If you too have been looking for a Geisha tattoo with a creative approach, this tattoo is meant to be inked on your body.

The unique representation of beauty and an Edo period inspire, this tattoo features a Geisha with a hannya mask. Hannya is the demon mask and Geishas are the symbol of beauty and talent, and this Geisha tattoo has captured and have been able separate those two with distinction. This is what exactly draws the boundary from the rest of the Geisha tattoos. This black and white Geisha tattoo has even made sure to ink the eyelashes of Geisha distinctively. The flower on the head of the girl is cherry blossoms, a symbol of rebirth and beauty, and even without color, the tattoo remains as stunning as the colorful ones.

If you want to go for a beautiful black and white Geisha tattoo design, we have found your perfect match!

If you have been looking for some realistic Geisha tattoo designs, this Geisha tattoo is something you should consider getting inked on your body.

‘Namakubi’ can be translated as ‘severed head’, which makes this tattoo even more interesting. This tattoo holds a lot of meaning beyond what meets the eye, making this tattoo one of the most captivating Geisha tattoos.

If you have been looking for an ultimate head-turner tattoo, we promise you that this is it!

There is hardly any Geisha tattoo that is not stunning and the same goes for this stunner as well. Inked in red, this tattoo is an immediate jaw-dropper for sure. In this Geisha tattoo, the girl is shown as holding part of an Oni mask. The tattoo design is also been incorporated with floral designs surrounding it. This Geisha tattoo will fit perfectly on a woman.

So, if you have been looking for a pretty Geisha tattoo that is feminine but powerful at the same time, this Geish tattoo in red ink is the one you should go for!

A beautiful portrayal of a traditional Japanese Geisha tattoo, this tattoo is also a stunner. With a vintage feel, this tattoo features a Geisha with vibrant colors, reflecting the ancient culture of Geisha, their use of colors, and the use of white makeup. This Geisha tattoo design is also one of its kind and will still make your new tattoo look very attractive.

If you want your tattoo to reflect the true culture of Geisha, then this Geisha tattoo is perfect for you.

This Geisha Japanese woman tattoo has been placed on the arm. Geishas are highly skilled and graceful dancers, and this tattoo is a perfect portrayal of the same, reflecting the Japanese art and culture because Geishas were the people’s entertainers. The relation to the true culture of Geishas is what makes this tattoo distinct from other Geisha tattoos.

If you want to show off the tradition and your love for this age-old culture, then this Geisha tattoo is a great choice.

Design with vibrant colors and minimal designs, this tattoo gives off strong American traditional Geisha tattoo vibes. In this tattoo, the woman is seen holding a katana, again reflecting Japanese traditions. Strong and unique, this is not your regular Geisha tattoo. This tattoo reflects the fierceness of a Geisha and how they will cut through you if you dare disrespect or demean these beauties.

If you have been looking for a creative tattoo that portrays the true Geisha nature, this tattoo is the one for you.

We are positive that you must have found your favorite Geisha tattoo. However, if you think none of these matches your type or the kind you are looking for, you might want to check out our suggestions:

What is a Japanese geisha tattoo?

A Japanese geisha tattoo is a type of tattoo that features the image of a geisha, which is a traditional female entertainer in Japan. Geishas are known for their intricate makeup and hairstyles, as well as their elegant kimonos.

How much does a Japanese geisha tattoo cost?

The cost of a Japanese geisha tattoo will vary depending on the size, complexity, and artist that you choose. However, expect to pay anywhere from $100-$500 for a small to medium-sized tattoo.

How big should a Japanese geisha tattoo be?

The size of your tattoo should be based on personal preference. However, keep in mind that larger tattoos will take longer to heal and may require more touch-ups than smaller ones.

What colors are used in a Japanese geisha tattoo?

Traditional Japanese geisha tattoos feature black and gray ink. However, some artists may use color to add visual interest to the tattoo.

How long does it take to get a Japanese geisha tattoo?

The time it takes to complete a Japanese geisha tattoo will depend on the size and complexity of the design. Smaller, simpler tattoos can be completed in one sitting, while larger, more detailed tattoos may take several sessions.