101 Best Jaguar Tattoo Ideas You Have To See To Believe! 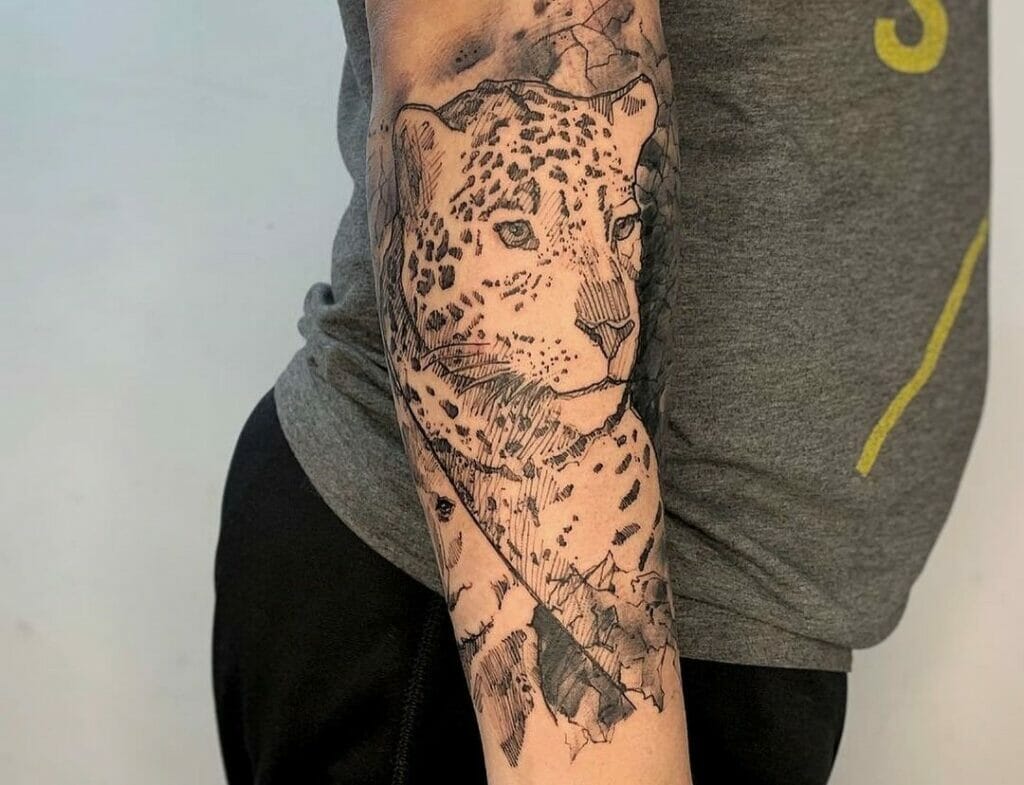 One of the large cats, the jaguar, is a majestic animal that is a powerful symbol of fighting spirit among different cultures of the world.

The jaguar motif ranks high among popular tattoo ideas due to the rich history and symbolism attached to the big cat. Along with all the powerful animals that exist, such as the lion and the tiger, the jaguar is also popular as an American traditional tattooing idea.

Different cultures such as the Mayans, the Incas and the Aztecs worshipped the jaguar as God. They built various types of jaguar totems and temples that paid homage to the animal, and people used to wear jaguar jewellery as a sign of honouring the animal. The jaguar remains one of the last big game animals to exist in the Americas.

Although jaguars are now found in South and Central America, the origin of these animals can be traced back to Asia. They came to North America through the Bering Strait and, in the course of time, became a symbol of killer instinct and bravery.

The spotted colouration on their bodies sets the jaguars apart from leopards and tigers. The Aztecs saw the jaguar as the God of the underworld, a protector of the realm of death. People used to ink jaguar tattoos on their bodies during that time, and this has continued even in the 21st century. The ‘Jaguar Knights’ was the name of an army of the Aztecs whose soldiers were highly trained and vicious.

The Mayans believed that a jaguar was symbolic of divinity and power, and hence a handful of people could wear jaguar pelts. These were the most powerful people in the tribe. When the official coronation ceremony took place, the new Mayan ruler changed his name in order to add the word ‘jaguar’ to symbolise his divine right to rule.

Head below and pick the jaguar tattoo which best suits your style.

Blackwork tattoos are fascinating to look at. This combination of blackwork and jaguar is a beautiful piece of art. It embodies the spirit of the jungle. You can think of getting this tattoo on your back.

Another blackwork tattoo, this design is a juxtaposition of opposites. On the one hand, jaguars are animals of prey, while on the other hand, butterflies are a spirit of innocence. Both are beautiful animals who have come together as the best match for this animal tattoo.

The bright colours of this jaguar tattoo are very eye-catching. Using flowers surrounding the animal give this tattoo a distinct beauty of its own. The newest tattoo designs involving the jaguar make use of colours like green and magenta for making the tattoo pop out.

The jaguar is depicted as a spirit of the forest through this jaguar tattoo. The meaning or symbolism of this tattoo can be interpreted by the person getting this inked. You can think of using another animal such as a tiger or a lion instead of the jaguar.

Getting jaguar tattoos inked on the ankle may not sound like a good idea in your head. But once you get it inked, you will surely love it. The sun is a sign of life, while the jaguar is a sign of power. The Aztecs worshipped both of them for these qualities, and the ancient people of this tribe used images of the jaguar in a totem. The sun motif further emphasises the fighting spirit of the jaguar.

One of the great big cats is the jaguar. This tattoo, although a cartoon version, has several layers of meanings attached to it. The jaguar has long been a symbol of fertility and hunting. You will notice the girl is holding a knife as if going to hunt prey in the jungle. The detailing on this jaguar tattoo makes it pop out as a work of beauty.

The ancient tribes worshipped many animals as gods. Among them, jaguars and snakes were revered the most. This work of art is a culmination of the belief of the ancient cultures. The meanings behind getting this tattoo can vary from person to person. Both of these creatures are symbols of fertility.

Jaguar gods were popular in the Mayan culture, and this design has the jaguar drawn in the same way as found in ancient inscriptions of the Mayan civilisation. History tells us that they attached the symbolism of power with this animal. You might ask your tattoo artist to add some more details in the background, such as trees, to make a full scenery of a forest.

One of the popular tattoo ideas, this design has a unique appeal capturing the beauty of the jungle. Instead of using two jaguars, you can pair the American traditional panther tattoo with a jaguar tattoo.

A similar design as above, the pair of jaguars adds their own meaning to this tattoo. You can get a smaller version of this tattoo inked on your neck.

We are confident that if you choose this tattoo, you will have a unique piece of art designed on your body forever. Using the concept of double exposure in tattoos is a rare feat, and this jaguar tattoo manages to do that and how! For a piece emanating beauty, try using another animal of the cat family, such as a leopard, for the final tattoo design.

There are perhaps only a few members of the cat family whose walk is as graceful as the jaguar. This tattoo captures the grace and power of the animal to the full extent. It seems as if the jaguar is going to hunt in the forest for its favourite prey.

Hailing from Asia, the jaguar is now found in South and Central America. The Aztecs attached special meanings to the animal as they worshipped it. This Aztec jaguar tattoo shows one of the ‘Jaguar Knights’, skilled soldiers in the Aztec army who were not afraid of anything. The raw power of the man oozes out from the tattoo design. This design is best reserved for the forearm and back.

Tattoo meanings vary from one person to another. This small jaguar tattoo has its own meaning. You may not have associated cuteness with the jaguar, but this tattoo makes you think just the opposite. Mini animal tattoos are loved by many people, and you can try one for yourself. You may use different creatures such as elephants, dragons, and bears to add variety to your tattoo collection.

The range and diversity of jaguar tattoo designs are not limited to the tattoos you have seen above. A lot of other tattoos are also there like:

What does a jaguar tattoo mean?

A jaguar tattoo is often seen as a symbol of strength, courage, and power. It can also represent loyalty, protection, and authority. In some cultures, it is seen as an amulet to ward off evil spirits or bad luck. Jaguars are also known to be fierce predators who can adapt quickly to new environments and will fiercely protect their loved ones. Ultimately, a jaguar tattoo can be seen as a representation of the wearer’s inner strength and determination to move forward in life despite any obstacles they may face.

What are the different types of jaguar tattoos?

Jaguar tattoos come in many different styles, depending on the design. Traditional jaguar tattoo designs often feature the feline with its body drawn in an aggressive stance, while modern designs may incorporate other elements like tribal or floral patterns. Some jaguar tattoos are also designed to be more realistic, featuring the animal’s fur and other details. No matter the style, jaguar tattoos are sure to add a fierce and powerful presence to any wearer’s body art.

How much does a jaguar tattoo cost?

The cost of a jaguar tattoo will depend on the size, complexity, and design. Smaller tattoos can range from $50 to $200 while larger designs may cost upwards of $500. Additionally, some artists may charge extra for color or other customizations. It’s important to discuss all these details with your artist before getting your jaguar tattoo to get a better idea of the cost.

How do I choose a jaguar tattoo design?

Choosing the right design for your jaguar tattoo is an important decision, so take time to consider all of your options. It can help to look at different designs online or in books and magazines to get some inspiration. It’s also a good idea to discuss the details with your artist before getting inked—they will be able to provide advice on the size and placement of your tattoo, as well as any customizations that may be available. Most importantly, make sure you choose a design that speaks to your personal style and values—it should reflect something meaningful about yourself, so it will be something you’re proud to show off for years to come.