10 Best Jack And Sally Tattoo Ideas You Have To See To Believe! 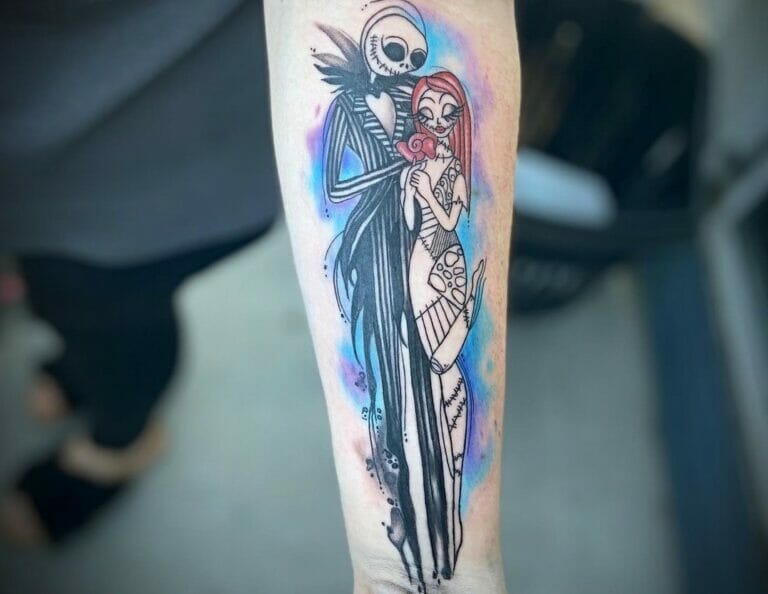 Are you looking for some Jack and Sally tattoo ideas for your next spooky tattoo? Then here is a compilation of the best tattoo designs.

Jack, Sally, and Zero are inked in this tattoo as they portray positive attributes and are the main protagonists of the fantasy musical and animated movie, ‘The Night Before Christmas’ by Tim Buton.

Jack Skellington who is inked in the tattoo plays a character of a charming gentleman who is graceful and tolerant equally. Sally on the contrary illustrates a very tender, forgiving, sweet, and affectionate character.

Zero is the loyal dog owned by Jack who obeys and accompanies him wherever he goes. Henceforth, the tattoo mentioned above depicts the powerful combination of all these three spirits who are bestowed with such positive characteristics. Check out the list of Jack and Sally tattoos we have prepared.

This monochromatic tattoo proves the versatility of this perfect little family.

This Jack tattoo with Sally and the pet dog has a perfect meaning behind it. It imparts the moral of the story that depicts true love and affection within a family.

Jack And Sally Tattoo For Halloween And Christmas

Jack and Sally tattoos have set huge couple goals that are a class apart.

If you know the storyline of this interesting movie, The Nightmare Before Christmas, then you must be aware of the interesting love story of Jack and Sally. Jack or the pumpkin king, a skeleton who is tattooed used to live in a Halloween town gets tired and bored of the same celebration every year. Hence, he tried to implement the celebration in his town similar to that of Christmas town’s celebration. Sally presumed that Jack’s idea was not good enough for their town yet she tried supporting him throughout. Their intense love and understanding are what sets them an excellent example of tattoos depicting true love.

Getting Jack and Sally inked is yet another form of love and art.

This tattoo is the ultimate couple’s goal for people who are in love. A large part of their relationship is that they don’t understand each other’s point of view, which adds extra meaning to what they symbolize.

Jack and Sally tattoos are a unique idea for getting an outstanding unique tattoo that has a meaning.

The Jack and Sally tattoos are a match made in heaven. One of the most popular tattoos for couples that signify infinite love and the spirit of togetherness. This movie has the presence of a Halloween scene with various creepy characters as well, but it gives its fans an insight into the unique storyline.

No more forgetting who you’ve got your heart set on – they’ll always be right there with you.

The Nightmare Before Christmas is a 1993 stop-motion animated musical dark film produced/co-written by Tim Burton. The story follows Jack Skellington, a being from “Halloween Town” who opens a portal to “Christmas Town” and accidentally brings Christmas into Halloween. Get this Jack and Sally tattoo style to show your love.

This unique tattoo design is the perfect choice for couples who want to get inked and represent their relationship. The lock and key design with Jack and Sally impart the lesson of togetherness in life.

This Jack and Sally tattoo creates a new vision of life. Along with the sharing heart tattoo, a quote can be featured that says: “Love Is Sharing One Heart.” It really is the ultimate couple’s goal. The characters in the movie are related to Halloween town with additional spooky and creepy details. Therefore, these Jack and Sally tattoo designs are indeed a way to proudly prove your affection.

Together Jack Skellington And Sally Tattoo

Tattoos may be fun to wear with the right clothes, but they also represent something about you. If you’re in love, there’s no better way to show your commitment than with this Jack and Sally-themed tattoo design. These dark full theme Jack and Sally heart tattoo ideas are a sign of eternity and happily ever after.

Tattoos are a form of art but tattoo ideas always have a hidden back story to them.

These Jack and Sally ink designs are one of a kind that can be inked anywhere on the body such as on the leg, arm, sleeve, or shoulder. The search for a perfect tattoo is never-ending, hence here is the doll Sally and Jack Skellington tattoo that actually depicts the epic story of two souls that come together.

Jack and Sally tattoos are a great way to commemorate your love for The Nightmare Before Christmas. The movie is a classic that still holds up to this day. It tells the story of Jack, who falls asleep on Halloween eve and wakes up in a world where, instead of being the only person wandering the streets, he’s surrounded by monsters. He eventually meets Sally, who has been kidnapped by an evil Oogie-boogie man. Jack and Sally work together to save the holiday from being completely ruined!

It has detailings of every little character and the main characters of the movie are also portrayed. Their life in the movie is very appealing as it has myriads of takeaways, from happily ever after to understanding and joy. Every important attribute is illustrated by the best possible characters.

Jack and Sally tattoos are amazing if you like spooky and romantic tattoos. We hope this list inspires you to get one for yourself.