10 Best Jabba The Hutt Tattoo Ideas You Have To See To Believe! 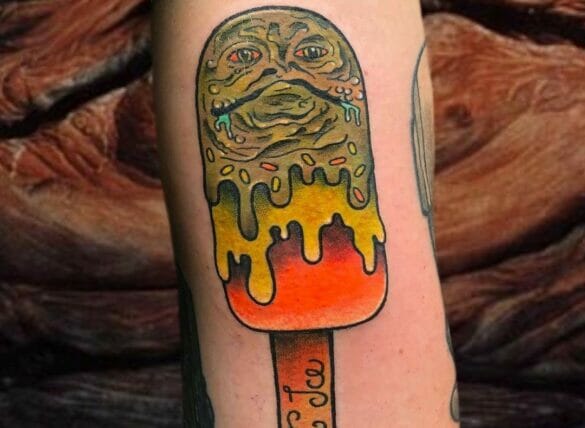 Jabba the Hutt is a feared Hutt crime lord in the Star Wars movie who is in charge of a notorious criminal empire.

This legendary Star Wars character is also an interesting subject when it comes to tattoos. He also sports a Deslijic tattoo, a symbol of his tribe, on the right arm.

Jabba is portrayed as a villainous gangster who hails from a tribal community known as Nal Hatta. He is known to dominate and even torture the residents of his palace. His criminal empire was situated on the Outer Rim world of Tattooine. He is involved in a variety of illegal activities including piracy, slavery and trading of illegal items across the planet. However, most of the planet’s wealth is generated from these illicit acts and thus he possesses a tremendous influence in the politics and underworld. The reference of this fictional character finds its place in various political satires to signify corruption and corporate politics.

You can portray your Jabba tattoo in an artistic or comical way and incorporate other Star Wars characters for a more captivating appearance. Here is a curated list of some of the best Jabba tattoos that will win your heart!

Here, Jabba is portrayed inside a cupcake with a bow tied around it. The powerful gangster Jabba looks extremely innocent in this tattoo art. His twinkling eyes further accentuates his delightful appearance. The delicious cupcake is garnished with a pair of cherries on top. The artist has shaded Jabba’s skin giving it a beautiful glow. This super cute piece is will amp up your style quotient and bring a smile to your face for sure.

This is an extremely detailed design done using black ink and grey ink. The folds of his skin are intricately drawn with perfection. The entire tattoo is mostly inked in black with subtle highlights in some portions. The brilliant shadow work at the bottom is not one to be missed either! You can ink this tattoo design on your arm, like the one shown in the picture, with your favourite quote from star wars.

Jabba appears like a ball of fire, filled with rage, in this tattoo art. His inner aggression is radiating through this ink work. The artist has presented his artistic genius through this design. A combination of bright red, yellow, and orange ink has been used to create Jabba with final detailings done in black. You can alter the size of your Jabba tattoo according to your preference.

Here, Jabba is immersed in his own thoughts while smoking a hookah. A pair of red flowers are placed by his side. Both green and yellow ink has been used to ink the character while his eyes are emboldened in yellow. Place this elaborative design on your back or thigh where there is enough space to ink the details.

If you are in search of a Jabba tattoo with a realistic appeal then this is the one for you. The stripes on his skin are highlighted with white which adds to its realism. A gradient of brown and dark green is seen on Jabba with hints of black. This tattoo fits well on the curvature of the arm of the wearer. You can also place this Jabba the Hutt tattoo symbol on your back.

The outline of this simple watercolour portrait of Jabba is done in black ink. His eyes are inked in a contrasting shade of orange that brilliantly highlights the entire tattoo. The fluid colour fade-out technique appears like traditional canvas art. You can incorporate a variety of colours to make your tattoo art look even more appealing.

You should opt for this fusion tattoo art if you are a true Star Wars fan. Here, we can see Jabba along with Boba Fett and Boushh all in the same frame. The ganglord Jabba is kept simple on a yellowish backdrop. His prominent prehensile tongue sticks out of his mouth. Boushh, a bounty hunter, is wearing his classic armour suit. Boba Fett, another fictional character from the movie, is sporting his Mandalorian armour. Moreover, the intricate circular framework that appears like a coiled rope, has given an edge to this design.

The slug-like appearance of Jabba is perfectly portrayed in this design. The tapering end of his body is drawn with great precision. There is a smooth gradient of colour on his skin that has blended really well. You should place this tattoo along the length of your arm or leg.

This intriguing design of Jabba with Salacious Crumb can be a great idea for your next ink. It appears like a scene from the court of the crime lord during the Galactic Civil war. Jabba is intricately shaded in a greenish tint. There is a glint in his red eyes, enhanced by the play of shadow and contrast. Salacious Crumb, seated beside him, happens to be a jester in his court.

This quirky depiction of the notorious ganglord looks perfect on the skin of the wearer. Small bumps on his skin are emboldened with colourful inks. The phrase ‘Thug Life’ written on the bulge of his chest is the focal point of this tattoo art. Perhaps, it is popularised in pop culture and refers to a person who has built himself up from scratch. Thus, it describes Jabba perfectly as he has built his criminal empire all by himself.

It might be one of the lesser-known star wars tattoos but there is a certain mystery to this character that you certainly cannot ignore. His gradual transformation to a feared crimelord is a story worth telling. There is a variety of inking styles and techniques that you can opt for. You can take ideas from the list of suggestions given below and even add your personal touch to your Jabba tattoo to make it unique.