10 Best It Tattoo Ideas You Have To See To Believe! 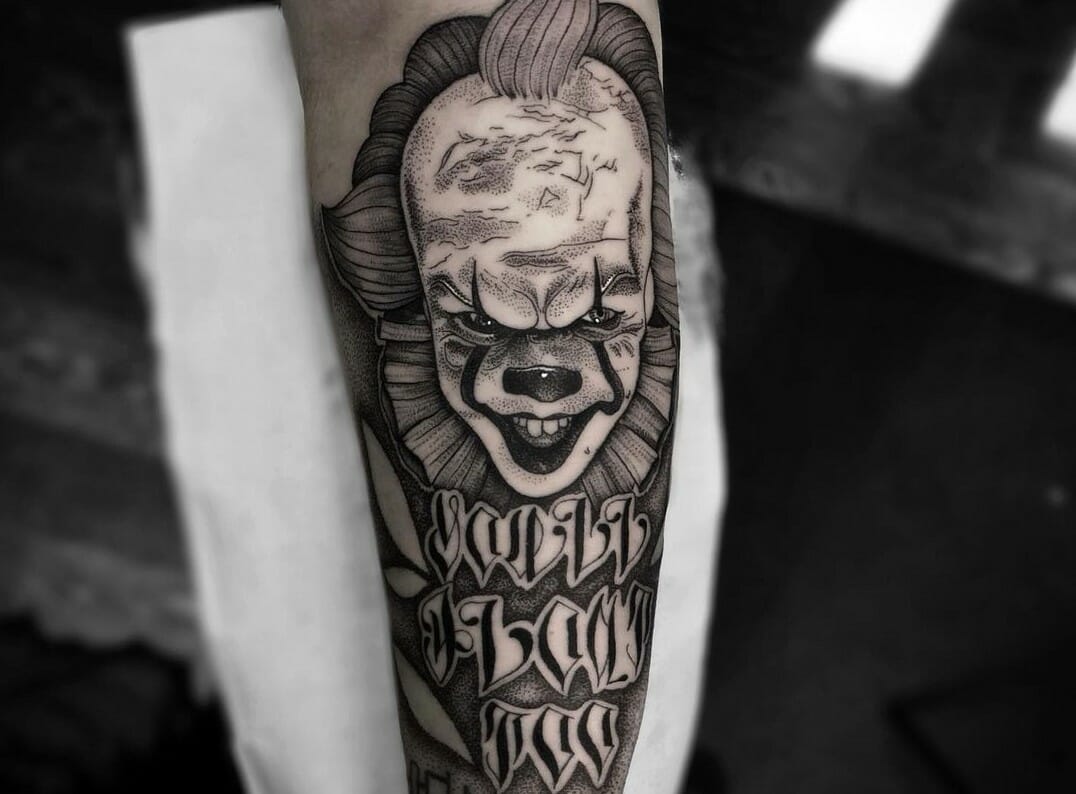 If Pennywise’s creepier-than-creepy smile fascinates you then here’s a list of the sinister manifestations of some of the coolest It Tattoos you must get!

Believe it or not, but Team Pennywise does exist making Pennywise Tattoo a must-have!

While some of us are terrified of the creepy clown, there are people who find his character rather fascinating. Fascinating enough to have his sinister smile tattooed on themselves!

In this new era, our fascination with villains and anti-heroes is trendy enough to grab them Emmy nominations. And Pennywise’s villainy is almost poetic and oddly charming making him a staple piece for the new era of rising villains and anti-heroes. While this boggart-like character has haunted Richie and many Clourophobiacs with his signature smirk time and time again, some fans of the film and the characters chose to tattoo their favorite characters, quotes, and of course, Pennywise’s infamous sinister grin on their bodies. If you are a member of both the Losers Club and the Pennywise Club then you are at the right place and we will make your search easier for you and save your time so you can go get that tattoo new IT tattoo you want. IT tattoo is trending in 2021, you can become a part of the trend and share your love for the characters by etching some of the coolest manifestations of the film into body art. Continue reading to find inspiration for your next new tattoo that you can get etched on yourself if you are a tattoo enthusiast or work your magic on another if you are a tattoo artist.

The first tattoo on our list of Pennywise tattoos is the one with Pennywise’s signature sinister grin that can be petrifying for many and make Clourophobiacs and Richie quake in their boots. A quick Instagram search will show you that this particular tattoo is the most sought-after style in 2021 with many tattoo enthusiasts getting a different version of the Pennywise tattoo, ever since the film was released. In this piece, the artist has used black as a dominant color, which makes it much more terrifying than it already is. It can also be considered as a portrait tattoo because of its life-size and 3D look that focuses solely on the character’s still face. This style of tattoo sits perfectly well for forearm tattoos.

The “Float” Quote It Tattoo

It tattoo cannot be complete without the famous “We all float down here” quote. By far, this has been the most appealing of all the tattoos considering the eerie yet vibrant depiction of the most famous quote and scene from the film. In this tattoo, Georgie’s bright yellow raincoat grabs the most attention at first glance while the quote is etched in a creepy font that commemorates the eerieness of the opening scene of the movie. Since Georgie could not escape his horrifying fate, one can get this tattoo etched as a memory of the late Georgie Denbrough who never floated.

Pennywise And The Red Balloon Tattoo

While most Pennywise tattoos are realistic versions of his creepy face, this tattoo depicts Pennywise’s cartoon-like appeal best describe as simple but cute. As scary as the other Pennywise tattoos are, this tattoo looks harmless and colorful while keeping that signature sinister look intact. The Red Balloon is the highlight of the art as it marks Pennywise luring his victims, who are mostly children, with his red balloon, luring them to their death.

Any die-hard fan of the movie can easily recognize this particular It Tattoo. It is one of the best tattoo ideas that any tattoo enthusiast or a dedicated fan of the Losers Club will much appreciate. This small tattoo is the simplest of them all and yet profoundly expresses the Losers Club turning their tag as “losers” into a more positive word “lover”. Its simplicity adds to its appeal and the tattoo sits well in various spots including their outer biceps, inner elbows, or wrists. It is one of the best hand tattoos for one to get.

If you prefer a minimalist tattoo then this particular piece will appeal to you. The artist simply depicts one of the main characters’ Beverly Marsh in an animated way. The Red Balloon is once again a part of the art the tattoo artist has created, depicting “Bev with Pennywise’s Red Balloon”. It is apt for you to etch on your forearm.

This huge piece of tattoo art features both Pennywise and Georgie Denbrough. If you are as affected by the opening scene of the 2017 remake of the movie then this tattoo is for you. The artist beautifully etched Pennywise’s sinister look with a “Hiya Georgie!” on his forehead while the lower portion of the tattoo features Georgie in his bright yellow raincoat and the infamous red balloon.

This simple It Tattoo is inked in black with simple straight lines that create Georgie’s little boat. The same boat that had lured Georgie to his death. While it is simple, it may simply represent a die-hard It fan’s devotion to the movie and Georgie’s character.

This small piece of tattoo portrays the “Losers to Lovers” scene of the movie as just a mere symbol. Here, the artist uses simple black ink and font for the “S” in Loser and two bright red jagged lines form a “V” for Lover. It is one of the many small tattoos that people prefer to get etched on their color bones or inner elbows.

If you find sketchings appealing and Georgie with his Red Balloon is your favorite character then this tattoo is what you should get. The artist uses a darker shade for Red Balloon while the rest of the tattoo is etched in simple black ink and created to look like a sketch. Georgie’s beloved little paper boat features in the tattoo too as well.

If you want a more close-up and creepier look for your Pennywise tattoo then this piece will be perfect for your forearms. The artist uses black ink to create the most detailed version of Pennywise’s sinister look complete with the little paper boat that connects Georgie’s fate to Pennywise’s hands.

There are several other popular It tattoos and Pennywise tattoos to choose from. In order to make your search a little less tiring and boring, suggested below are a list of tattoos for you to find your inspiration from: