10 Best Irish Tattoo Ideas You Have To See To Believe! 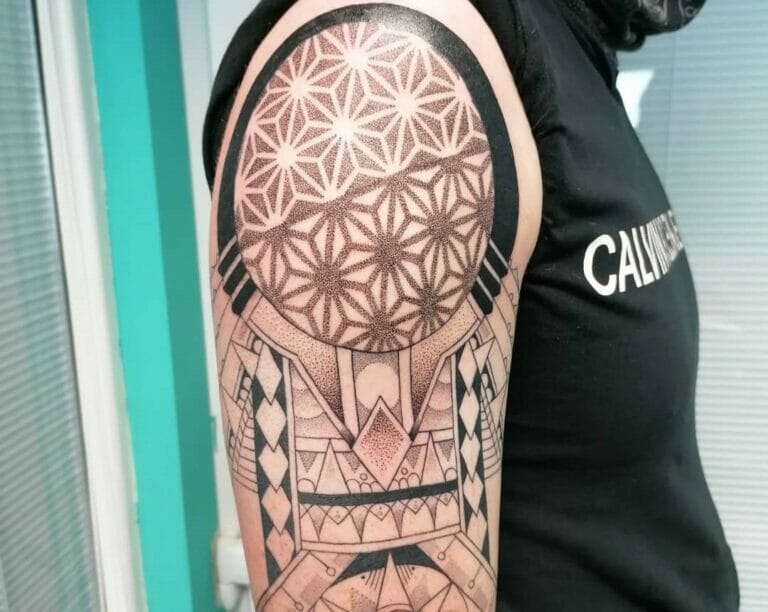 Ireland is synonymous with the iconic Guinness beer and its jubilant pub culture!

The ‘Emerald Isle’ as it is aptly referred to is an ancient island nation rich in heritage, culture and literature. When one thinks of Ireland, one is instantly reminded of the colour green and images of people celebrating St. Patrick and his legacy of spreading Christianity amongst the pagans of Ireland.

Irish people migrated far and wide carrying the richness of Irish cultural heritage with them. It is therefore no surprise that Irish tattoo ideas celebrating both Irish pop culture as well as the amalgamation of Celtic and Gaelic heritage have become extremely popular all over the world, in recent times.

The Irish are inhabitants of an island full of mystery, magic and imagination. Irish folklore has always had references to fairies, demons and other mythical creatures such as the leprechaun. Celtic and Gaelic culture was prevalent in Ireland before the advent of Christianity. Although the majority of the population of Ireland is Catholic, their rich Celtic and Gaelic heritage is still widely celebrated by the fun-loving Irish people.

Celtic and Gaelic culture is full of sacred symbols that appear to have made a re-entry into international pop culture! These sacred symbols often have deep philosophical meanings making them very appealing tattoo choices regardless of whether you are Irish or not! For example, the Celtic tree of life symbolises wisdom, longevity and strength. It represents the equilibrium of nature and is also a symbol for “rebirth”.

Apart from sacred symbols and lucky charms, Irish folklore is famous for mythical creatures like the leprechaun which is basically a trickster fairy, the banshee, the Pooka and the changelings! Halloween which is a festival popularised by Americans was actually introduced to America by Irish immigrants celebrating “Samhain” which is the Irish festival to welcome the winter season!

If you are intrigued by the richness of Irish culture and heritage, check out these cool Irish tattoo ideas!

The Celtic Cross is a proper fusion of Celtic symbolism and the cross which is a holy symbol for Christians. It is an intricately designed cross and is often seen as the pride of Ireland. The central nimbus represents divinity and adds a charming look to this stunning Irish tattoo. The Celtic knots making up the inner body of this Irish cross tattoo makes it a truly unique tattoo design. Don’t miss the additional orange and green flowing colours on both sides of the cross representing the Irish flag. This Celtic Cross is the complete package when it comes to anyone looking for a solid Irish tattoo design to get inked.

This tree of life tattoo design is majestic, to say the least, and is one of the best tattoo ideas for men! Irish symbols often have deep meanings and the symbolism behind the tree of life does not disappoint. This particular tattoo depicts the tree connecting the lower and upper realms. A beautiful inscription runs through the middle finger and snakes upwards forming the body of the tree. The entire tattoo is composed of Celtic knots which give it a unique appearance. The minute details within the knots can only be made by an experienced tattoo artist and will require precision and patience. This Irish sleeve tattoo is sure to be an instant hit with men!

This tree of life tattoo design has a feminine vibe to it. Women and trees were both considered to be sources of life according to ancient pagan history. This tattoo embodies both. The tree originates from the heart of the beautiful woman and branches out elegantly. This tattoo depicts ancient history with a modern twist. It is truly a work of modern art!

This Irish tattoo is gender-neutral. The lower part of the tree is formed by a Celtic knot which gives it a dynamic appearance. The stars and the multiple stars and the moon complements the mystical nature of this Irish tattoo giving a celestial feel to this work of art! The grainy shading of this tattoo is its unique feature and must be done by a tattoo artist who specialises in this kind of shading.

The Celts believed trees were magical because they provided food, shelter, medication and various other important things necessary for the sustenance of life on earth. They believed that trees were a portal to another realm and connected the lower and upper earth. The Celtic tree of life is therefore a mystical symbol that has become a very popular accessory and tattoo choice in recent times across all genders!

This four-leaf clover tattoo design is the epitome of cuteness. Minimalistic in nature, the placement of this tattoo is everything! If you are looking for an Irish clover tattoo that isn’t time-consuming to create but is sure to stand out despite its simplicity, look no further!

This minimalistic tattoo design is a burst of green and screams (in) “IRISH”! Featuring both the traditional Irish shamrock tattoo along with the four-leaved clover in two different shades of green, this tattoo design is sure to grab eyeballs. It is bound to be a conversation starter at every social gathering!

This Irish tattoo design is a beautiful specimen of Celtic tattoos. The speciality of the Celtic knot is that it comprises a single line knotting itself like a serpent and forming beautiful shapes. The black knot is complemented by the vibrant lotus beneath it. It makes for a perfect fusion between Irish and oriental art!

This is the traditional three-leaf Irish clover. This shamrock tattoo is the Irish symbol for the holy trinity. This beautiful and delicate Irish symbol is fern green and has intricate line shading which would take quite a lot of precision to recreate. The pristine white carnation above the shamrock adds freshness to this elegant tattoo which is a great way to honour one’s Irish heritage!

The three-leaved clover or shamrock is akin to the traditional symbol of Ireland. It is believed that St. Patrick used the three-leaved shamrock to explain the concept of the holy trinity (which is central to Christianity) to the people of Ireland. The three leaves of the shamrock, therefore, represents the father, the Son and the Holy Spirit.

The Celtic term for the Irish jay translates to “screamer of the woods” in English and is symbolic of fear and the wild nature of the forests. This awesome tattoo is yet again inspired by the rich Irish Heritage. The blue jay is tiny yet powerful and is composed of the brightest shade of blue near the edges of its wings. The tattoo is made even more attractive because the bird is shown to be in flight carrying a shamrock which is a sign of good luck!

The speciality of the Celtic knot is a single line forming extremely complicated designs in a beautiful way. This symbolises eternity and has different meanings for different people. For some people, this could symbolise the eternal love they feel for someone. Celtic knots are often used as an inspiration to create geometric shapes. This tattoo is neat and compartmentalised into different geometric shapes including circles, semi-circles and triangles. This tattoo is gender-neutral and can be created on any part of your body. For most people, this tattoo could mean something personal thereby making it a popular tattoo choice for parts of the body that are not usually exposed.

The Claddagh is the Celtic symbol for intense love or friendship. This is one of those Celtic tattoos that has a legend behind it and is an integral part of Irish heritage. This traditional Claddagh tattoo has all the elements of the symbol name, the two hands holding a heart with a crown on top of it. This Celtic tattoo is simple but quite awesome! Make sure your tattoo artist is adept at the art of shading and can achieve the granular nature of the shading as shown in the reference image.

This Claddagh tattoo again has all the traditional elements present in it. However, the overall look of this Claddagh tattoo is accentuated by the beautiful blue roses framing the symbol. It makes for the perfect chest tattoo for men. The vibrant colours on this tattoo and the halo around the crown give a divine look to this striking tattoo.

This gothic Claddagh tattoo is a brilliant tattoo inspiration that is sure to catch everyone’s attention! Although this has all the traditional elements of a Claddagh tattoo the sinister nature of the hands makes a huge difference to the overall look of this tattoo. Although this is not for everyone, you should consider getting this tattoo made if you have an appetite for the dark and gory! The interplay between the gothic black shading and the white shiny spots on the tattoo is perfectly redefined.

This tattoo is a dark spin on the comical image normally attributed to a leprechaun. The black and green dual toned colour palette of this tattoo is a sight to behold. It is so dramatic that it appears as though it is a movie poster! The green eyes of the leprechaun add that extra evil expression to the face and make the tattoo come alive! If you are keen to get this Irish inspired leprechaun tattoo you must ensure that your tattoo artist is a genius who can recreate the mind-blowing shading on the hand and nails of the creature along with the shading on the veins all over the face of the Leprechaun.

This is the perfect comical and cute leprechaun tattoo for those looking for something more conventional. In fact, this tattoo is Ireland in a package! Don’t miss the shock of ginger hair and beard that is so typical of Ireland along with the Irish clover popping out of the hat, the harp which is again synonymous with Irish heritage and the pot of gold that is the life savings of this cute little trickster fairy!

This is another cute and funny version of this mythical Irish creature. A perfect pick for quirky people who wish to honour their Irish heritage, this tattoo is Irish to a Tee complete with the all green theme and tiny clover symbol on the hat!

The harp is another symbol synonymous with Gaelic and Celtic traditions and symbolises the immortality of the Celtic soul. The harp was the symbol of Irish resistance to the British crown and continues to be a national symbol to this day. The harp stands for Irish pride and is a great option for those looking for Irish tattoo ideas to get inked. This regal harp tattoo is perfect for those who feel a special sense of patriotism towards Ireland. The colours of the Irish flag and the majestic falcon plucking at the strings of this beautiful musical instrument truly makes this tattoo look poetic! The clovers in the background of this tattoo complement the overall Irish look and feel of this design.

This is a traditional Irish harp tattoo design that is simple yet wholesome. The black outer lining of this tattoo makes the bright green, red and yellow colours used to fill the body of the tattoo really pop! The traditional Celtic shamrocks are an integral part of most Irish inspired harp tattoos. The shamrocks in this particular tattoo design are a beautiful mix of light and dark green. This Irish harp tattoo is perfect for the upper arm area, especially for muscular men.

If you are looking for a wider variety of Irish tattoo ideas beyond this comprehensive list, do check out the following list: