10 Best Irish American Tattoo Ideas That Will Blow Your Mind! 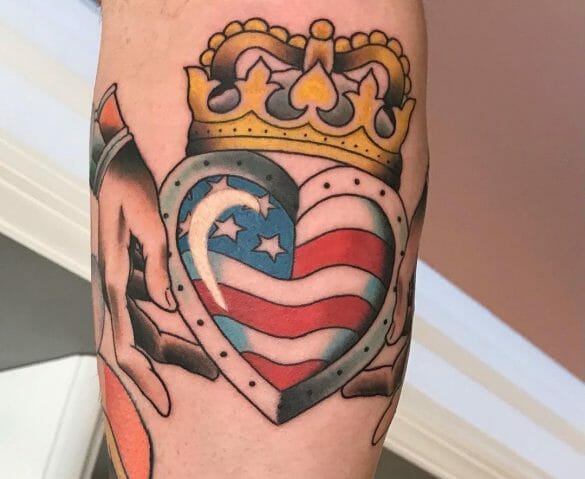 The Irish American tattoos are greatly influenced by the significance of symbolic irish culture and its folklore. Their distinctiveness gives them a notion of being utterly innovative .

The Irish American Tattoos may consist of consists of Irish flag tattoo, Celtic tattoo, Celtic cross tattoo, and many more. They are worn by both men and women with pride.

Everybody wants to be careful about how they present their persona, and a well chosen tattoo can help them to reflect their demeanour. However, coming up with an Irish tattoo design that you might like can be a difficult undertaking. Irish tattoo art includes good luck charms such as shamrock, Celtic tribal themes, religious symbols and the Gaelic language. Along with Gaelic and Celtic culture Ireland has a prolonged history of Catholicism. The culture of Ireland includes the freedom as well as the success stories of the history. So, if you resonate with these ideals or if you are an Irish American, you can get this tattoo to represent a part of your heritage.

It’s time to delve into some of the most enthralling Irish American tattoo designs.

St. Patrick, who is depicted with the vivid green leaf, is also associated with the shamrock. The three leaves of the shamrock signify the Holy Trinity, as well as the strong Catholic ideals that pervade Irish culture. Some people will even incorporate a crucifix inside their shamrock tattoos to emphasize the Catholic undertones. People obtain shamrock tattoos for a variety of reasons, including religious significance. It is also a traditional good luck charm.

This iconic Shamrock tattoo also consists of foxgloves and lovely violets. The design is inked diagonally across the back. The usage of thin ink with different colors is one of the refreshing Celtic tattoos in the Irish history.

If we just sit back and observe this tattoo carefully, Celtic knot symbolizes the interconnection. The points of the triquetra, also known as a trinity knot, signify the father, son, and holy spirit; life, death, and rebirth; or past, present, and future, depending on what you choose to believe in. The love for Emerald isle makes this tattoo a unique design, especially with the three interlocking loops.

This tattoo includes Shamrock, a symbol of trinity as it was meant to convert the Irish to Christianity but it is not necessary to get a religious Celtic knots or symbolic tattoos done. You can even get one if you relate with the philosophy behind it.

There are several different ways to build a shamrock, and all of it relies on the types of meanings you want to utilize and how you want it to look like. Some people choose the traditional green shamrock to ensure that strangers know it’s an Irish tattoo, while others choose a more tribal pattern that gives it a more artsy aesthetic without taking away any meaning.

The ink style of this design is quite elegant. It uses a bit of white to create a sparkling effect. In this tattoo, the four leaves are enclosed in a circle and it has a similar structure as the Celtic knotwork. The two feathers add a charm to this tattoo.

Placed on the forearm, the majority of the design resembles the Celtic cross, with the Celtic knot placed in the center. The Celtic Cross Tattoo is a very common tattoo when it comes to Irish tattoo ideas. The bold look of this tattoo with the use of thick ink and also the Celtic knot on the whole makes it extremely eye catching. The Celtic cross is a symbol of Ireland, meaning infinite love. The skin around the design looks like cracks on the wall, caused by the symbol.

The simple cursive harding overlaying on the colored flag is basic and straightforward. The use of white ink through the middle section adds a further realist aspect, while Harding’s overlaying of the colorful flag is a well-applied, understated touch. Behind each palm, is the American and Irish flag tattoo, with the numbers 4 and 9 in the center.

By combining the Irish and American flags, Irish Americans can take this flag tattoo design to the next level. This is a fantastic way to show your support for both countries while also getting a unique tattoo design. The flags can be fashioned in a variety of ways, but usually people choose a vertical pole with a flag floating out to both sides. If one wants to go for a design larger or smaller, you can take reference of more Irish and American tattoos from the tattoo industry.

Celtic cross, the cross of Saint Patrick is frequently used to convey his teachings and good acts. It is a tattoo which not only includes a Celtic Cross but also the most popular symbol that is the interlocking loops with Irish flag.

Because it can fit so nicely in any place one wants to get it inked, this must be the first choice of Irish tattoo for both men and women. Because of the amount of line work and precision that goes into making one, they are frequently considered works of art in both the physical and tattoo form. You can go with a simple cross with traditional line work, or you can go with something much more elaborate, like a sculpture.

Many people, assimilate skulls in their Irish tattoos, occasionally even as the chief element of the artwork. Some designs, for example, a skull wearing an Irish top hat and holding a clover is the main spotlight for the Irish People. This is a tremendous idea for anyone who appreciates the mortality symbolism associated with the skull, as well as the way other Irish symbols appear with it. When drawn by a skilled artist, these can be quite cool Irish tattoo designs.

You can incorporate as many Irish symbols as you want into your Irish tattoo, just as you can with the skull but the specialty of this tattoo is the design and how every single detail has its own way to embrace the tattoo. If talk about the hat design and even the structure of jaw is quite jaw dropping.

The shamrock occupies a significant position in the Irish folklore. This tattoo depicts the image of a shamrock which is improvised with the multitude of watercolors .

The tattoo depicts that shamrock can not only be imagined in its original colours but can also exist in varying colours in the universe of imagination. The tattoo gives us the effect like watercolor is sprinkled on the shamrock art. Most of the tattoo illustrates a four lobed shamrock which will give this tattoo a symmetrical essence and strengthen the outlook of the tattoo. This watercolour tattoo is quite alluring and transforms a classic design into an innovative tattoo.

One of the unprecedented fact about Ireland is that it is the only country in the world with a musical instrument i.e. harp as its national symbol. So, the tattoo here depicts the extraordinary way to represent the Irish folklore. It consists of a harp which is swirled by the essence of shamrocks which gives an magnificent outlook to it .

This tattoo will never go unnoticed by anybody as its realistic intricacy leads to a rich first impression. The harp in itself gives a 3D outlook with those shamrocks around it. This tattoo is in its essence is truly Irish because of the presence of the country’s national symbol itself and the shamrocks along with it

The customized Shamrock Irish tattoo design is the finest idea of Irish tattoos. It is in the shape of a pyramid. This tattoo is the finest example of being devoted to the Irish. It has Shamrock as it’s center and Irish flag with the use of various colors, makes it the definite reason to get inked. The use of bold and contrasting ink in the colors of the Irish flag makes the design quite exquisite.

If you are looking for more ideas to celebrate the American and Irish history, then you can check some more of these eye-catching Irish American tattoos here.