10 Best Indian Tattoo Ideas You Have To See To Believe! 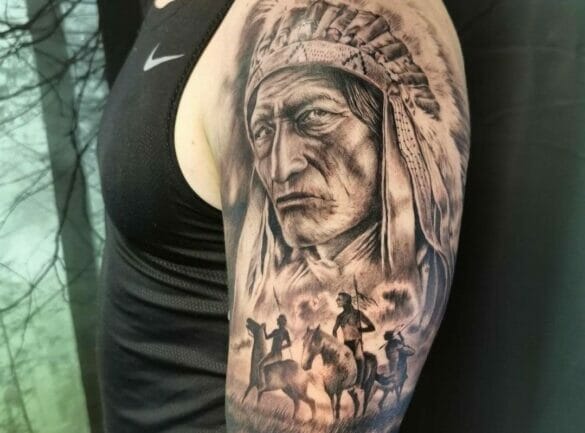 Indian or Native American tattoos have been around for quite a long time, but they have never been as diverse or unique as they are now.

Hence, Native American tattoos have become a way of showing appreciation towards a culture that is filled with history, tradition, and heritage. So, a Native American tattoo idea is relevant for both Indigenous people and others, who admire all that is associated with Indians. Additionally, a Native American tattoo can be inked anywhere on the body, with the size of the design being small, medium, or large and elaborate. These tattoos can incorporate traditional patterns, geometric patterns, or even neo-traditional and abstract designs. So, the creativity with regards to these tribal tattoos is endless.

Skull tattoos are popular in general, so a skull tattoo inspired by Native American symbols and patterns will be all the more eye-catching. As you can see in this image, the skull has a beautiful and elaborate headdress, which is a part and parcel of the Native American culture. The whole tattoo is featuring a ton of intricate detailing and shading, combining the monochromatic shades of grey and black to perfection. Native American tattoos portraying a skull are symbolic of respect, wisdom, courage, and power. Clearly, this fierce skull is the perfect embodiment of all those meanings.

In contrast to the first design, this tattoo is bearing the side portrait of a Native American skull with an elaborate headdress. The colour of this tattoo is not as dark as the first one, so if you are in search of tattoos that have a lighter appearance, you can surely get inked with this. Apart from the skull and the beautiful headdress, this design is also featuring three butterflies. This unique addition makes this tattoo the perfect fusion between fierceness and beauty.

In the Native American culture, different animals were used as totems or symbols for each clan or family. So, animal tattoos have been a form of Native American designs. In this neo-traditional tattoo pictured above, the outline of a tribal woman has been inked, with a tiger on her head. The face of the girl is also flanked by feathers, symbolising the headdress she has on. According to Native American heritage, the tiger is an animal used to symbolise justice, truth, and integrity. So, this modern take on an Indian animal tattoo is packed with deeper meanings, history, and tradition, as well.

This tribal tattoo is more of a traditional form of design, with the perfect use of grey ink. Here, apart from a bear, an eagle has also been incorporated. Both the little girl and the warrior or Chief has a fierce expression on their face, further adding to the intensity of the tattoo. While the bear stands for family values in this beautiful culture, the eagle is a symbol of truth and power. So, this is a perfect example of Native American tattoos with meaning. Such a tattoo would let others know that you have done considerable research before getting tattooed with a Native American tattoo.

If you want your Native American tattoo design to stand out and look modern, then you can get inked with this piece, which is not as common or prevalent. Here, only one half of the face of a Native American woman has been inked, with a bright reddish-orange colour over one half of her face and an orange eye. The rest of the tattoo has black and grey ink detailing, with feathers and a tiny gem or stone on her head. The outline inside which the face has been tattooed is a bird, which is adding uniqueness to the piece. Additionally, the colour combination is creating the perfect contrast.

This Indian sleeve tattoo with the face of a warrior and a warrior on a horse right below him is the perfect depiction of the history of exemplary courage and strength displayed by the Native Americans. Even though this design is a half sleeve tattoo, covering only the upper arm, the look of this piece is carrying a fierceness and boldness beyond measure. All the elements in this tattoo design, from the feathers to the background shading is reflecting nothing but perfection.

If you want an Indian girl tattoo, then this could be the perfect idea for you. This tattoo is also covering the upper arm of the wearer, and in addition to the headdress, it is also bearing typical tribal patterns right below the face of the girl. The tattoo is quite realistic with a look of determination in the girl’s eyes, and hence, a different kind of tone is being set from this piece.

Feathers make for great symbols when it comes to tattoos. Interestingly, feathers are also a typical symbol of Native American culture. So, combining those two can result in a beautiful tattoo like this one. The size of this tattoo is medium and ideal for people who want to get their arms or legs inked. The colourful feathers on the top and botanical motifs at the bottom are framing a picture of scenic beauty. For the Native Americans, nature plays an important part in their religion, as they are known to worship many aspects of nature. So this tribal tattoo design is the best depiction of an Indian tattoo.

Native American chiefs were known for their wisdom, strength, and courage. So, if you are a Native American yourself, a tattoo of an Indian Chief could be the best homage you pay to your forefathers. As you can see in this tattoo, the design is quite elaborate and featuring the portrait of a chief. The expression on his face is reflective of the years of experience he has. The realism of the tattoo is immense, even though it has been inked with grey and black. Every little detail in this tattoo has been done with the greatest precision.

A colourful Native American Tattoo is the ideal example of combining vibrance with heritage. So, check out this piece of art pictured above. The side view of a skull has been inked with a beautifully coloured headdress. The headdress is certainly the centrepiece of this tattoo design, with the alluring red, brown, black, and yellow combining to be a treat for the eyes. The skull also has the perfect mixture of black, white, and grey, to bring out a lovely depth in the design.

The fierceness and strength of Native American women are incomparable. So, a tattoo depicting a Native American woman can be the perfect justification for that. As you can see in this design, a medium-sized tattoo has been inked, with black and grey shades. This portrait is symbolising a subtle and graceful expression on the face of the subject, which is enhancing the elegance of the whole design. Such a tattoo would look great on either of the arms or legs of both men and women.

One of the most classical Native American tattoos would be the Native American tribal motifs, and this image is the perfect example of that. The bold black patterns are covering both the forearms, becoming half-sleeve tattoos. The most eye-catching part about this tattoo is the combination of shapes. The motifs and symbols seem to be like a mixture of lines and geometric shapes, which is quite pleasing to the eye. This tattoo would look great on the side of the neck, as well.

As you can already tell by now, the headdress is a major component for the Native Americans. So, a tattoo of just the headdress will be just as great to depict the rich history of this culture. As the image shows, a black and green headdress has been inked within a circle that seems to be made out of rope. The whole tattoo has been further enhanced by adding white detailing, which is creating a nice effect and doing justice to how beautiful Native American headdresses truly are. This design would look great on either of the arms or on the chest. You can add other elements like arrows or animals to create your own version of this tattoo.