10 Best Indian Skull Tattoo Ideas You Have To See To Believe! 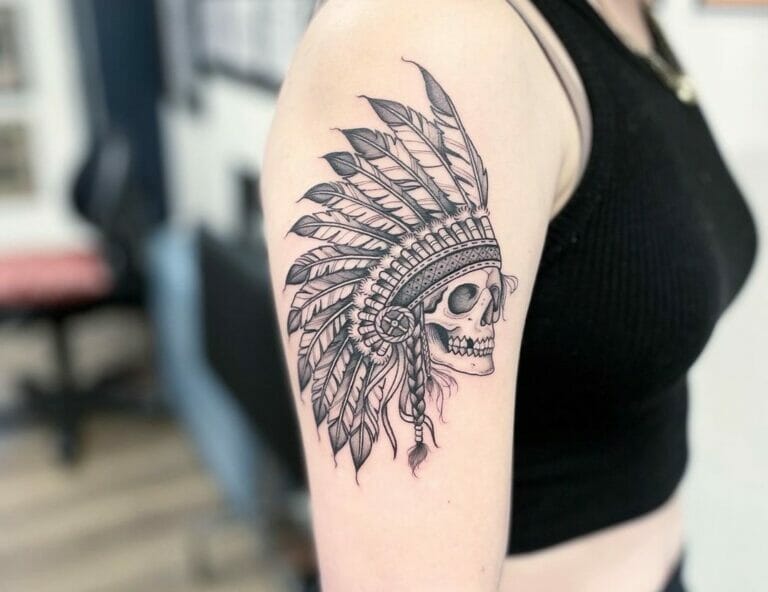 Traditional Indian or Native American tattoos feature a lot of designs and elements, with the skull being a very common one.

In general, skull tattoos have been exceptionally popular in the world of tattooing. So, an Indian skull tattoo only takes that popularity to the next level by adding various tribal motifs and symbols that only serve to enhance the vibe of the whole tattoo piece.

What Is The Indian Skull Tattoo Meaning?

With all that information in mind, dive into to catch a sight of the best Indian skull tattoo designs, that will surely blow your mind!

While large and elaborate designs have a special essence of their own, a small tattoo can be just as charming, if done right. Check out this design pictured above. The side portrait of the skull has been inked with a beautiful headdress. This tattoo has the perfect fusion of dotted shading and bold black inking. The feathers have the top and bottom parts fully inked in, with the middle section having grey dotwork, creating a lovely appearance.

For those who are in search of colourful and traditional Indian skull designs, this tattoo will look like nothing short of art, and the perfect representation of the Indigenous culture. In this tattoo, the side portrait of a skull has been done, with the skull being monochromatic and the headdress being vivid and vibrant. The orange and brown colouration of the headdress, with the minor yellow detailing, is adding elegance to this piece that simply cannot be denied.

This tattoo has a somewhat similar colour combination to the first one but has been done on the chest. Given the size and shape of the design, the tattoo does look well-suited for the chest area. While in the previous tattoo design the headdress was a lot more coloured, here the feathers have some orange added to them. Even then, the vibrance of this piece is stemming from the black detailing on each of the feathers, which is contrasting well against the orange tone.

Blackwork Indian skull tattoos are not that uncommon, but if you do not pick the right design you might end up regretting it later. So, why not rely on a good option for your blackwork tattoo? Check out this idea pictured above. Covering the entire calf muscle, this majestic design has the perfect balance of dark and light tones. Though the tattoo has been essentially done using black ink, the subtle detailing and shading include some grey, giving this Indian skull headdress tattoo a breathtaking look.

This skull tattoo might interest those people who are in search of half sleeve tattoo designs. As you can see in the image, the black colouration of this tattoo is contrasting well against the lighter portions, further enhancing the intensity of the blackwork. To add to that, the skull is also seemingly bearing a fierce expression on its face, with a hint of a smile. All this together is adding up to make this design quite enticing.

Outlines tattoos have evolved over time to incorporate everything from small and minimalist designs to elaborate designs. This tattoo pictured above, fall in the latter category. The tattoo is featuring quite an elaborate skull, with a giant headdress. The thin black outline and minimal grey shading are in perfect contrast to the elaborate nature of the tattoo. In general, the headdress was worn by Native Americans as a symbol of power and strength. In fact, the most important and influential members of each tribe wore the most elaborate headdress. So, a skeleton with a giant headdress is the perfect way to symbolise that. Such a tattoo stands for the fierceness of the Native American warrior and could be considered as an Indian chief skull tattoo.

Animals were an integral part of the traditional Native American culture. Each animal acted as a totem or symbol for a clan. So, a variety of different animals carry quite a range of deep meanings associated with them. Additionally, a lot of Native Americans wore animal headdresses. So, this Indian skull tattoo is the perfect combination of both those meanings and associations. Here, the skull has been inked with a panther on its head. On the top of the panther, some feathers are visible, to make the whole design more complete. Both the animal and the skull have beautiful shades of blue inside their eyeball sockets, giving the tattoo a glowing appearance.

While modern and neo-traditional tattoos are in a league of their own, if you are looking for a more traditional Indian skull tattoo, you may find this idea to be of use. Here, the skull has been done with shades of grey, red, and black, with a fierce expression on its face and in its eyes. The headdress in this tattoo is quite eye-catching as well. Since the whole tattoo has the same colour combination, this tattoo has a beautiful uniformity about itself, which is very pleasing to the eyes.

If you are not scared of getting inked, you may surely get inked with this spectacular skull tattoo. Spanning over the entire forearm, the skull in this tattoo has a sly smile and apparently glowing blue eyes. Apart from the facial features, the tattoo artist has also added Native American jewellery and an authentic headdress in order to make this tattoo even more eye-catching. The alluring combination of black ink with white detailing is adding a new level of allure to this whole design.

In search of a colourful Indian skull sleeve tattoo? Don’t worry because we have got you covered! The skull in this tattoo is looking quite realistic due to its colouration. The headdress has a beautiful combination of pastel shades, paying the perfect homage to the Native American culture. If you notice carefully, the band below the headdress has mountains with a river flowing in between and the sun. This is the perfect depiction of the close relation between Native Americans and nature. The way this tattoo has been coloured makes it look like a painting. Such Indian skull tattoos are very relevant for artists, as well and can be inked anywhere on the body.

While a skull with an Indian headdress tattoo is supposed to exude power and strength, that does not mean one cannot add floral motifs in order to make the tattoo more elegant. For example, as you can see in this Native American tattoo, the skull is being adorned by a headdress that has a variety of wildflowers and even a dreamcatcher attached to it. In fact, the headdress in this tattoo has been beautified with the help of those elements. You can undoubtedly choose this new design for yourself and watch your social media blow up when you post a picture of your new tattoo!

If you are looking for a traditional Indian skull headdress tattoo on your back, then check out this design. Here, the tattooed skull is occupying one side of the back and is a depiction of the side view of the skull. This angle is perfectly helping the feathers be the centrepiece of the tattoo, which seem to have a gradient colouration. You may choose to get this inked right in the middle of your back as well.

This skull Indian headdress tattoo is unique from the rest, as here, the skull is lacking its jaw bone. If you want to make a statement with your tattoo, then you should definitely choose this different idea. Additionally, the tattoo has a very dark appearance, due to the all-black ink colouration. A tattoo of this size would look great anywhere on the body. You may get this inked on your leg, as pictured. Many people would also prefer getting inked with such a design on their chest or shoulder.

Now that you know about the various Indian tattoos, you may easily take the help of this guide to choose your next tattoo piece. Skulls have always been an enticing subject for tattoo pieces throughout the world. So, Indian skulls seem to be an improvement on regular skull tattoos. Here is a quick compilation of the best Indian skull tattoos of 2021 to help make your selection process easier-