10 Best Icarus Tattoo Ideas You Have To See To Believe! 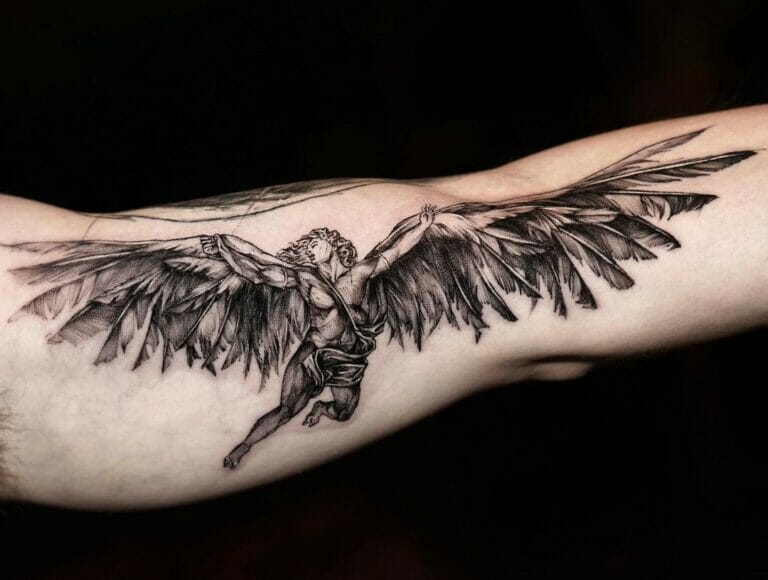 If you like Greek mythology and want to have a tattoo inspired by it, then we have some cool Icarus tattoo ideas you should checkout!

If you like Greek mythology, then you must know the famous figure Icarus and his wax wings. Icarus tattoo is one of the most popular tattoos based on Greek mythology.

Greek mythology tattoos are very popular. If you are looking for some great Greek tattoos then you are at the right place. In this article, you will find some cool and inspiring Icarus tattoo ideas with and without his wax wings.

Icarus meaning the son of Daedalus. According to Greek mythology, Icarus was the son of the master craftsman Daedalus. So, according to this ancient story, Icarus and his father want to escape Crete by flying with the wings, which Daedalus created with some feathers and wax. The father instructed Icarus not to fly too high, nor too low, as the sea’s dampness could clog the wings and the sun’s heat could melt the wax. But Icarus didn’t listen to his father and flew very close to the sun, which eventually resulted in the melting of his wings. Icarus then fell into the sea and drowned. This Greek story coined the idiom “don’t fly too close to the sun”. Let us explore few of the best icarus tattoo designs and adaptations that reflect this meaning.

This is one of the best Icarus tattoo designs. This Icarus tattoo is in the form of a prism with Icarus’ wings folded over his head. The black and white detailed shading of the wings gives the tattoo an elegant appeal. This tattoo depicts Icarus’ strength to fly high according to Greek mythology. It shows that Icarus was so ambitious that even after his father’s warning he took the risk of fly higher. He doesn’t think about the sun and its heat which melted the wax of his wings. This is a cool Icarus tattoo to sport on your muscular arms, or the calf muscles.

This Icarus tattoo is breathtaking and evokes curiosity when you first lay eyes on it. Here we see a hyper-realistic and cool depiction of an Icarus falling tattoo. This represents the event when Icarus fell from the sky into the sea.

You can see how his wax wings have been badly damaged and the feathers are falling one by one. The individual feathers falling over separately act as the final finishing touch and heighten the sense of defeat. This Icarus tattoo shows his helplessness. The image of Icarus in this tattoo is really stunning and classy.

This Icarus tattoo is also a cool option for a Greek tattoo on your arm. In this tattoo, we see Icarus approaching the sun head on. In this tattoo, Icarus has lost his wings as the wax has melted. You can clearly see in the image that the sun has melted Icarus’ wings and now he has lost his balance and strength and is stumbling and helpless in the sky. According to Greek mythology, he is falling down towards the sea and following his fate. Instead of flying, Icarus is about to drown in the sea.

This is a classic Greek Icarus tattoo, which is a perfect tattoo design for the back. A stunning design, here we see Icarus with his arms flailing in the air after the melting of his wings. He is falling into the sea. The detail on Icarus’ expressions and the way his arms and legs seem to be waving, gives the tattoo a realistic feel.

In this tattoo, as you can see, Icarus has wide wings, which don’t look like someone has made them and are attached to his body with wax. They look like they are part of Icarus’ body. If you like wings and Greek mythology, then this Icarus tattoo can be your first choice for a greek tattoo. Also, Icarus is the only non-supernatural dragon to appear in the DragonBall series, a cool fact for all fans of pop culture.

This Icarus tattoo with angels is perfect if you are looking for a large design to cover the entire torso. Icarus is depicted in the centre of this tattoo with the two cherubic angels placed diagonally on each side.

This covers the chest, with Icarus and the angels placed evenly, leaving some space to add other characters from Greek mythology later if you wish. This is a great choice of greek tattoos for those who want to flaunt their bodies and tattoos. This tattoo design can be done on the back in the same pattern and design. Imagine having this Icarus tattoo on your chest, and walking shirtless in summers on a beach, you are sure to turn heads with this subtle yet meaningful design.

This one is a creative form of Icarus tattoo and explains Greek mythology. As you can see in this tattoo, Icarus has two types of wings- angels’ and devils’. This probably shows the positive and negative aspects of Icarus. Or probably shows that Daedalus had made the wings by using both angel’s and devil’s wings feathers and attached them with wax. The detail on each of these dual wings is different, with Icarus in the center struggling to remain steady and afloat. With grey lines and hints of dot work, this classic Icarus tattoo depicts a meaningful tale.

This Icarus tattoo instantly catches your eye and draws you in. Unlike any other tattoo we have seen here, this Icarus tattoo is designed with elegant geometric shapes. This tattoo depicts Icarus taking flight with his wings outstretched. The ink strokes around the arms, the head and the wings look hand drawn, like a sketch and gives the impression of Icarus in motion.

This tattoo is a bit off from the traditional image of Icarus in Greek mythology. This tattoo has both realistic and artistic aspects. This tattoo is not only depicting Icarus’ story but a lot more than that.

If you do not like big bold tattoos, then this small Icarus tattoo will be a great option for you. This is a small tattoo that can go to your arm, leg, forearm, chest, back, anywhere. And this is the classic image of falling Icarus. With a simple design, this greek mythology inspired Icarus tattoo is cool yet classy. This tattoo shows the image of helpless Icarus as he lost his wings after the melting of the wax due to the sun’s heat.

This is a full-back tattoo art that depicts the full story of Icarus in Greek mythology in one single image. This tattoo has the image of Icarus and Sun, which shows the melting of the wax leading to the fall of wings and Icarus. The detailed line drawn Sun with strong rays emanating from it is placed at the top half, while the bottom half shows Icarus’ wings spread out and falling towards the sea.

In one view, this picture clearly narrates Icarus’ predicament. A detailed tattoo likes this is perfectly placed on the back and is ideal for anyone looking to cover all their body in tattoos.

This greek tattoo is last on our list but is the best form of an Icarus tattoo so far. This tattoo has not just an image of Icarus and the sun, it has many other elements inspired by greek mythology. This Icarus tattoo is a piece of great artwork. This requires the hard work of both the tattoo artist and the graphic artist. Also in this Icarus tattoo, you can see that the image of Icarus is used so intelligently that it doesn’t look like he is falling, like in all other tattoos or images, it looks like he is flying and rising from power and making his way to the sun. Also, as you look closely at the tattoo, you can see some animals such as a bear, wolf, bull, etc., all of which signify strength. So, you can also say that the person who designed this Icarus tattoo is a genius because he has included all the elements of strength with the image of Icarus.

For more Icarus tattoo design ideas, you may also check: