101 Best IBEW Tattoo Ideas That Will Blow Your Mind! 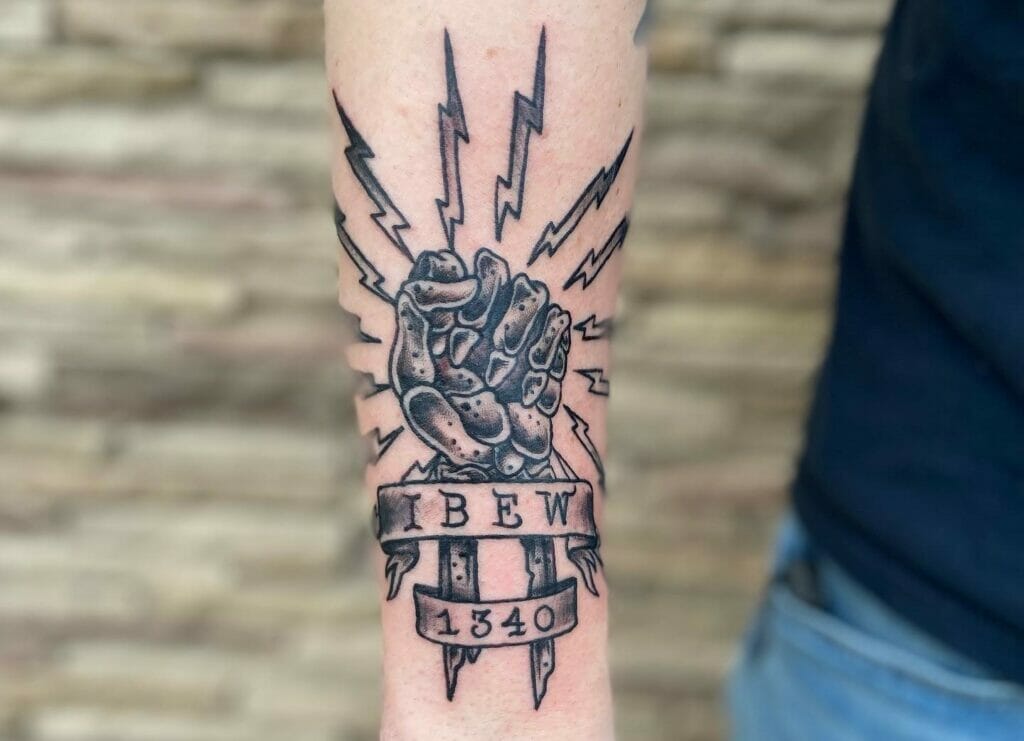 An IBEW tattoo shows off the quality example of a tattoo that resembles a strong brotherhood. Keep scrolling to learn more!

IBEW is the acronym for International Brotherhood of Electrical Workers.

It was previously known as the National Brotherhood of Electrical workers. It is the hallmark of an American institution that started in Washington, D.C., in 1891.

IBEW speaks of labor unions and currently holds membership of up to 750,000 active workers and ex-workers as of 2020. Apart from being present in the United States, it has an established presence in other countries like Canada. Puerto Rico and Guam are also included.

An interesting story lies behind the formation of the union. According to reports, the IBEW was formed in keeping with the line workers and electrical engineers by the American Federation of Labor. One may wonder about the link of this union to a tattoo.

They followed the collective bargaining agreement. After indulging in quite a few rough years, the union made its way to the top and was deemed a recognized authority. An electrician tattoo can set you apart from the other tattoos. You can join your nearest local by logging in to the Local Union Directory.

This tattoo features the classic IBEW fist. It may signify a local IBEW number. It is also significant for a ”local” tattoo since it has that word and others, such as brotherhood and IBEW. Interestingly, you can see the number 11 around the wrist.

You may wonder what an IBEW local is at this point. A local is usually a location for the organization. For instance, IBEW 11 represents 12,000 electricians, including apprentices. Sparks of lightning are dispersed from the fist surrounding the creases and the turns.

You can also find some shadow work around the fist. Overall this tattoo represents a strong union between IBEW and one’s ideals. It also utilizes white ink for the extra effect of lightning. From the looks of it, the sleeve looks like an excellent place for the tattoo. Besides, you can always flaunt such visible tattoos with pride.

This tattoo is yet another tribute to one’s allocation. Another interesting fact about tattoos is that they represent the local six based in San Francisco. This organization has been active in the city and county since 1895.

As one can deduce, it has been powering the place for a long time. As of 2022, the local boasts 10,000 employees, which can be a smaller number compared to the overall membership around the globe. What better way to commemorate your allegiance to a local than to get a tattoo of it?

You can show off visible tattoos like this to your friends and families. Besides, an arm tattoo or any other body part seems like the right fit for this one. The sleeve might be a better fit than other body parts for most people. You can also observe a red circle with an inner blue circle. The logo speaks for itself as it is covered in the passion of an IBEW member.

This tattoo is reminiscent of an autumn evening in a Japanese setting. Imagine you’re a college-goer living in a one-room apartment in a shady neighborhood. The power line is the first thing you see when you peek out of your windows.

The artist has done an excellent job depicting the electrician lines and the transformer. On the other hand, you can see the metro rail boxes passing by the recently shed tree. If you work or have worked for the organization, this is your cue to get this tattoo.

You can share this tattoo with other enthusiasts. It looks like this tattoo has been taken from a photo of a particular setting. Tattoos like this bring out the essence of intricacy and chaos characterized by the intertwining wires.

It also adds itself as a distraction from the usual IBEW tattoo. One may ask questions such as how it relates to the organization. Of course, if you read it, you may understand it as a more subtle representation.

This particular tattoo looks like a simple dedication. It is not laden with too much intricate symbolism. Instead, it utilizes the classic fist symbol with lightning striking. One can only imagine the short process that went into getting it tattooed.

Tattoos such as this one look like they have been recently inked. Besides, the ink is perfectly fresh on this tattoo. On the other side of the tattoo, we find another tattoo that gives off a Greek God vibe. It may be the perfect excuse for those looking for their first tattoo.

Perhaps, these two tattoos are meant to complement each other. We will never know. Nevertheless, the placement of both tattoos looks planned. The supposed God also peeks at his fist. At this point, you can assume that he is none but Zeus, the God of lightning and thunder.

You can find a site of your liking before getting an appointment at the tattoo store. Hence, you can assume that this tattoo is covered in rich symbolism. As a brotherhood member, getting this tattoo means you genuinely care about achieving a goal.

This person has chosen the chest for this purpose. You can get this tattoo any day, given that you have read into the symbolism.

Tattoos like this one are a trademark of knuckle tattoos. Knuckle tattoos have been around for the longest time. Usually done in classic Gregorian font, these tattoos make for a nice photo or an Instagram post. Not only that, a knuckle tattoo resembles a person’s spearheaded nature.

Tattoos like these show that people aren’t afraid to voice their opinions. At the same time, they embrace themselves in front of the world with pride. To understand the origin of this tattoo, you need to read about the local office.

This person is affiliated with Local 369. You will see a lightning flash if you check the ring finger tattoo. Apart from the knuckles, you can have them on any other location on the body.

This tattoo is a classic mark of an influential person. You will not regret getting this tattoo if you get an appointment, so you should probably go for this one without giving it much thought. Besides, being a member of this organization guarantees you are secure in your line of work.

The shading in this tattoo accurately represents a staunch figure in the IBEW. You can get it made on the sleeve and flaunt it as a symbol of pride. A good thing about this tattoo is that it ventures out of the blue to mark a uniform symbolism throughout the sleeve.

At the same time, it displays a sense of belonging and love that one can share without a second thought —the sparks coming out of the first mark the endless capabilities of a person of such stature. One can only imagine the feeling the tattoo-getter must have felt after completing this tattoo.

This tattoo is reminiscent of a particular IBEW enthusiast. This person also seems to be a nationalist, as evident in the U.S. flag around the logo. In addition, you can see this number engraved —8379450.

While we are not sure what that means, we can only assume that it refers to an IBEW local. Depending on your choice, you can get it done on the sleeve or the calf. A lot of spacing is required for tattoos like this one.

As one can see, this tattoo represents the gut of a person. What comes to mind when you see this tattoo? Indeed, not a timid person. This tattoo does the job of flipping off a person and can be interpreted as a symbol of resilience and brotherhood.

If you come across this tattoo suddenly, you may think that the person believes in the robust nature of the organization. This tattoo features a skeletal figure flipping off to the crowd. An excellent place to get this tattoo would be the hand.

This one features two separate tattoos, both of which are linked to a transmission tower. Another name for such a tower is a powerline. An appointment for such a tattoo can take a long time. One can quickly see how much work has been put into the shading.

Apart from the usual tall tower, we can also see a minuscule version of the tower in the bulb. This tattoo is a good fit for an IBEW-affiliated official. Since this tattoo requires maximum spacing, it is only advisable to have such a tattoo done in an open space.

This tattoo features a transformer and a few quotes. The quote reads -BECAUSE YOU’RE MINE, I WALK THE LINE. A passage such as this one only suggests that the person has taken up the electrical worker’s task while keeping a romantic interest in mind.

The person has cleverly utilized rhyming in these quotes. You can also see intricate shading on the transformer and beyond it.

Although it doesn’t undermine a worker’s efforts on the electrical line, it also shows the courage it takes to keep up with the expectations. The calf is a good place to get this tattoo.

If you care about the motto and its message, you can pay homage to the long-standing union by getting these tattoos. Here are a few examples of the tattoo of your choice. You can choose them based on the site of the work. Besides, you can get an outline and see if it works for you.

What is an IBEW tattoo?

An IBEW tattoo is a symbol of membership in the International Brotherhood of Electrical Workers (IBEW). It typically consists of two crossed lightning bolts, with the union’s initials inside. The design may also include other symbols such as stars or American flags. The tattoos are often seen on members of the union, and they signify their commitment to the organization and its values. The IBEW is a union that represents over 750,000 electrical workers in the United States and Canada. It strives to protect their rights, provide training opportunities for members, and ensure fair wages for all. An IBEW tattoo is a physical symbol of pride in belonging to such an organization.

What does an IBEW tattoo represent?

An IBEW tattoo represents a commitment to the values of the union and its members. The crossed lightning bolts symbolize strength, unity, and power. The initials represent the International Brotherhood of Electrical Workers, which strives to promote fair wages and working conditions for electrical workers around the world. By getting an IBEW tattoo, members are making a statement to the world that they stand behind the values and principles of their union. Additionally, it is a sign of solidarity among those who have chosen to join the IBEW. This tattoo serves as a reminder to all members that they are part of something larger than themselves and should strive to live up to its standards.

What are some of the most popular IBEW tattoo designs?

Some of the most popular IBEW tattoo designs incorporate elements such as American flags and stars in addition to the crossed lightning bolts. Other variations may include eagles, anchors, flames, or various other symbols that are meaningful to the wearer. Many people choose to personalize their IBEW tattoos by adding their name or initials next to the union’s initials. Others may choose to add a quote or phrase that has special meaning to them. No matter what design is chosen, an IBEW tattoo will always serve as a reminder of loyalty and commitment to the organization.