10 Best Hula Girl Tattoo Ideas That Will Blow Your Mind! 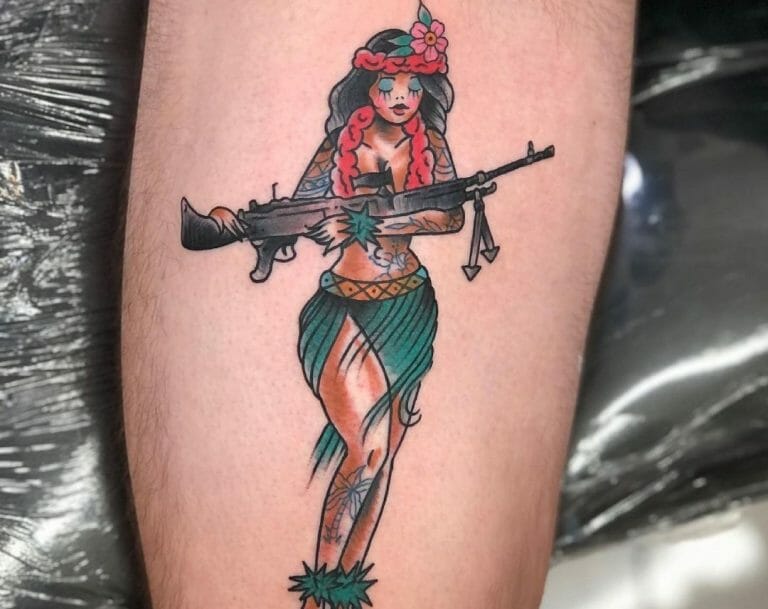 If you want a permanent memory of Hawaii inked on you, say aloha to this select list of well-curated Hula girl tattoo list.

Hula girls are the very heart and soul of Hawaii and are considered to be one of the main attractions of the state.

They are referred to as fair-skinned “Hawaiian” women adorned with their iconic cellophane or grass skirts who are known for their attractive belly dances. They are considered to be the main attraction in Hawaii and their signature style of dressing up and decking their hair, neck, wrists, and ankles with floral garlands is an integral part of the Hawaiian culture.

They predominantly perform on the beautiful shores of Waikïkï wrapped in their signature costumes and flowers in their hair. Countless tourists adapt their style to respect and blend in with the Hawaiian hula culture and can even be seen dancing along with them, by swaying their hips to- and-fro. This seductive movement of their hips, their signature style of being clothed scantily as well as their beauty are what draw masses of both young and old to Hawaii for their vacations.

The hula girls are also common ground of exploitation because of their sexual suggestiveness which additionally helps run Hawaii’s tourism industry. But, if we do not take that point into account, one can say that the hula culture of Hawaii has indeed become the perceived identity of the women of Hawaii and the state of Hawaii itself.

If you’re looking for a tattoo that screams “Aloha!” in island ink, you should most definitely go for this tattoo. This tattoo will quench your thirst for the sea even when you’re done vacationing and ready to go back to work. You can even get it from any safe tattoo shop in Hawaii as Hawaiian tattoo artists will most definitely know what they are doing when it comes to a hula tattoo.

This extremely colourful tattoo is just the right blend of classic tattoo design meshed with a terror induced impression. In this tattoo, the bold combination of a hula girl riding a shark is brought to fruition by using bright colours that are bound to stand out.

This poignant tattoo indicates that the sea without sharks is like Hawaii without hula women in their traditional garb, dancing their beautiful Hawaiian hula dance. If you’re up for some adventure with a side of eroticism and tropical entertainment, this cartoon style of a hula woman riding an angry-looking shark will not only make eyebrows raise but also have them say “Aloha!” underneath their breaths. What makes this tattoo all the more unique is the skull face of the daredevil hula woman.

These tattoo designs are ideal for sailors who are thinking about tattooing a hula woman. Although these are separate designs with stark elements of the sea and sailors, one can easily get all three of these beautiful hula women tattooed as they perfectly represent Hawaiian culture as well as are perfect elements depicting the sea. Tattooing hula women tattoos and Maui tattoos are also symbolic to sailors because they mean that these sailors have successfully sailed to Hawaii.

This tattoo is a perfect example of beautiful island ink artwork on skin. It is a colourful tropical frame that you can carry forever if you choose this tattoo to remind you of the great moments you have spent in Hawaii enjoying the sights of hula girls dancing on the seashores with the golden sunset in the background as the cherry on top.

This Hula woman dancing tattoo will be a perfect choice if you are looking for something cartoony, out-of-the-box, yet related to the hula style and culture. Anybody who loves the hula culture of Hawaii or is a connoisseur of the dance form can get this tattooed on your arm or your back. This is also a great example of island ink art which you can get from any tattoo shop in Hawaii as well. The shading makes this tattoo pop and stands out more because the pop of colour adds more dimensions.

Do you love Disney and Hula at the same time? Go for this tattoo design. It is a perfect amalgamation of Disney and Hawaii and anybody would recognise the iconic Disney character, Daisy duck. You cannot go wrong with this tattoo because not only is it colourful but also worthy of being a conversation starter because a large population of people all around the world will be able to recognise Disney.

Even if we associate Hawaii and hula with tropical beautiful colours, doesn’t mean that a black and white tattoo of a hula woman will not be as poignant as one that is filled in with colour. This intricately designed black and white tattoo can also show off your love for the sea, Hawaii as well as the hula culture, style and dance form.

Hula girl tattoo art and Aloha Maui tattoo designs are quite famous not only amongst hula enthusiasts but also people who love the sea. Do check out