10 Best Hugin And Munin Tattoo Ideas That Will Blow Your Mind! 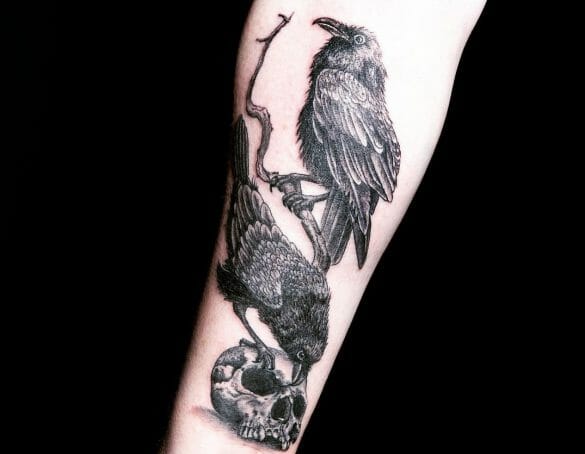 If you are looking for the choicest Hugin and Munin tattoo, this classic list of Nordic tattoos will simply blow you away.

Hugin and Munin, in ancient Norse mythology, are two ravens that are known to be Odin’s informants of secret knowledge who bring information by travelling all around the world of Midgard.

These helping spirits Odin perch upon Odin’s shoulders and whisper everything they see and hear in the world into his ear. As per Norse mythology, these godly birds would be sent out in the morning by Odin to fly around the whole of Midgard and were commanded to be back by breakfast.

The mystique connection between Odin and the pair of ravens Hugin and Munin has a very deep and wise meaning. If you search for a visual form of the memory of these ravens from Norse mythology, you will find various art depictions of Hugin and Munin from the sixth and seventh centuries AD. They are also portrayed in the depictions of Odin on clothing, jewellery, and helmets where you will frequently find pictures of him accompanied by one or a pair of ravens. These two legendary birds symbolise secret knowledge from the skaldic poems depicting stories from Norse mythology collected from the Viking Age. Hugin and Munin can also be great ideas for tattoos if you want one that bears a deep meaning and will also garner positive comments from your friends. If you are both a bird enthusiast as well as a sucker for Norse mythology, you can close your eyes and trust on Hugin and Munin tattoos because not only does it symbolise secret knowledge of the world, but will also serve as a great memory for something you love. Hugin and Munin tattoos are also a great choice for first tattoos if you are a lover of Norse mythology.

You can also relate to Hugin and Munin tattoos meaning travel, mysticism, and also take into account that these ravens of the great god Odin bear the knowledge of the world. They can also be drawn as an angel whispering in ear tattoo which can symbolise these ravens. It is a powerful tattoo choice as these raven tattoos can have many deep thought-provoking meanings and can also have links to a good core memory which you can create while getting it because tattoos are forever and you will always have a memory of when you get the tattoos of these ravens.

The god Odin, was given the name, Raven God as he was informed of all the secret knowledge that the ravens Huginn and Muninn had brought him. This detailed and beautiful monochromatic Huginn and Muninn tattoo is a great example of a tattoo worthy of being inked on a person who is a pursuer of knowledge and has the thirst to learn more and more. It also bears a great significance as a secret keeper as well. If you are looking for a big tattoo that is relevant to this aspect, this tattoo will be the perfect choice for you.

Aztec tattoos have been quite a rage and this Aztec tattoo design of Huginn and Muninn is sure to turn heads. Not only is it intricately designed In Norse mythology, these godly birds capture the surreal mystifying essence of the old Viking gods and are a powerful choice for tattoos if you want one that will have a clever connotation to symbolise secret knowledge. What makes it more unique is the addition of the red colour in between making it pop. It also adds more dimension to this design and will be nothing but a work of Norse art that you will bear on your back for the rest of your life.

Huginn And Muninn Tattoo With Odin

Odin is the all-powerful god of Midgard and has been depicted in many forms of art depicting stories from Norse mythology. He is quite often been portrayed in his regal style with his two raven mascots, Huginn, and Muninn perched upon his shoulders whispering in his ears the secrets of the world. This tattoo is a perfect portrayal of that image. The perfectly detailed shading, placement of the designs, and intricate detailing almost make it look like a piece of armour from the Viking age. If you are looking for a sleeve Huginn and Muninn tattoo, this tattoo is what you need in your life.

Amongst most tattoo designs, Nordic bird tattoos have gained quite some popularity. This particular tattoo is a Nordic design of the ravens of Odin named Huginn and Muninn. It is quite intricate if you look at the design and is an ideal one if you are looking for something that one hasn’t seen before or a different take on the design of the ravens. It is also a great tattoo design for twins, siblings, or a best friend and is a subtle way of showing off your bond with the said person. If you really love meaningful tattoo designs, this one is the one to choose. You can even get a differently-designed raven on your other hand if you want to make it a pair of ravens instead.

Sleeve tattoos are some of the most common tattoos found amongst tattoo enthusiasts all around the world. This particular design of Huginn and Muninn paired up with different elements from the Celtic culture is a great choice for a sleeve tattoo if you are a fan of Norse lore and mythology. What makes it better is the Celtic elements highlighted in red which adds a really nice touch and might also be a conversation starter if you choose it. It is a perfect tattoo for anyone who has the valour of a true Viking and is always in pursuit of great worldly knowledge.

Valkyrie and Vegvisir are some of the most popular and important characters who were mentioned in Norse mythology and lore. This detailed tattoo design clubbed with the choicest and most intricate Nordic elements will make an amazing tattoo not only for your arms but can also be tweaked and added to the shoulder or thighs as well. Not only is it poignant with Valkyrie’s enigmatic eyes, but the tattoos of Huginn and Muninn are also quite detailed and perfectly designed. This tattoo requires great precision and skilled hands, hence getting it from a good tattoo artist should be a top priority.

This tattoo is a fine example of modern art clubbed with mythical mysticism and is a perfect choice of art to have inked on your body. Mythology and elements drawn from it are quite often a source of great influence for tattoo artists and tattoo enthusiasts. This is a beautiful concept sketch of a tattoo that has great potential for looking like a work of pure genius on someone’s body. The beautiful details are sure to make it a great chest tattoo if you want.

When they say that the perfect shoulder tattoo does not exist, they surely have not come across this one. Not only does it bear great significance because of its symbolic meaning but this Aztec design of flying ravens on your back also bears a stark resemblance to angel wings. One can already tell that it can be a great amalgamation of two cultures through beauty and art. It is surely going to turn heads and will most definitely garner some positive comments from people who are into Norse mythology or others who might simply find it to be cool and unique angel wings.

Even if someone isn’t familiar with Norse mythology, they will most definitely recognise the name Mjolnir. Fans of the Marvel Comic Universe will be familiar with Thor who is a beloved leading character in many films and comics and is famous for wielding the axe which he is worthy of called Mjolnir. This tattoo is quite relevant to the masses as well as the Norse myth related to it. Not only is it a reminder of a great hero but is also symbolic of eternal worldly knowledge depicting that knowledge is true power. This tattoo is also extremely intricately designed and shaded to perfection so much so that it almost looks like a 3D image drawn on someone’s skin.

This tattoo clearly depicts the circle of life and the wheel of time with the Norse bearers of worldly knowledge perched on either side. Of all symbolic tattoos to choose from, this one sure takes the cake. This unique and versatile design will look good in almost every part of the body especially the chest, back, shoulder, arms and thighs and can make people go wide-eyed.

If you are looking for meaningful bird tattoos related to an age-old Norse tale from mythology, which also has a deeper meaning related to either memory or the knowledge of the world of Midgard, you should most definitely consider getting tattoos of the ravens Huginn and Muninn or an Odin raven tattoo. In this list of tattoos, you will find some of the choicest tattoos of Odin’s ravens to honour a memory or to give food to the thought processes of others.