10 Best Hufflepuff Tattoo Ideas You Have To See To Believe! 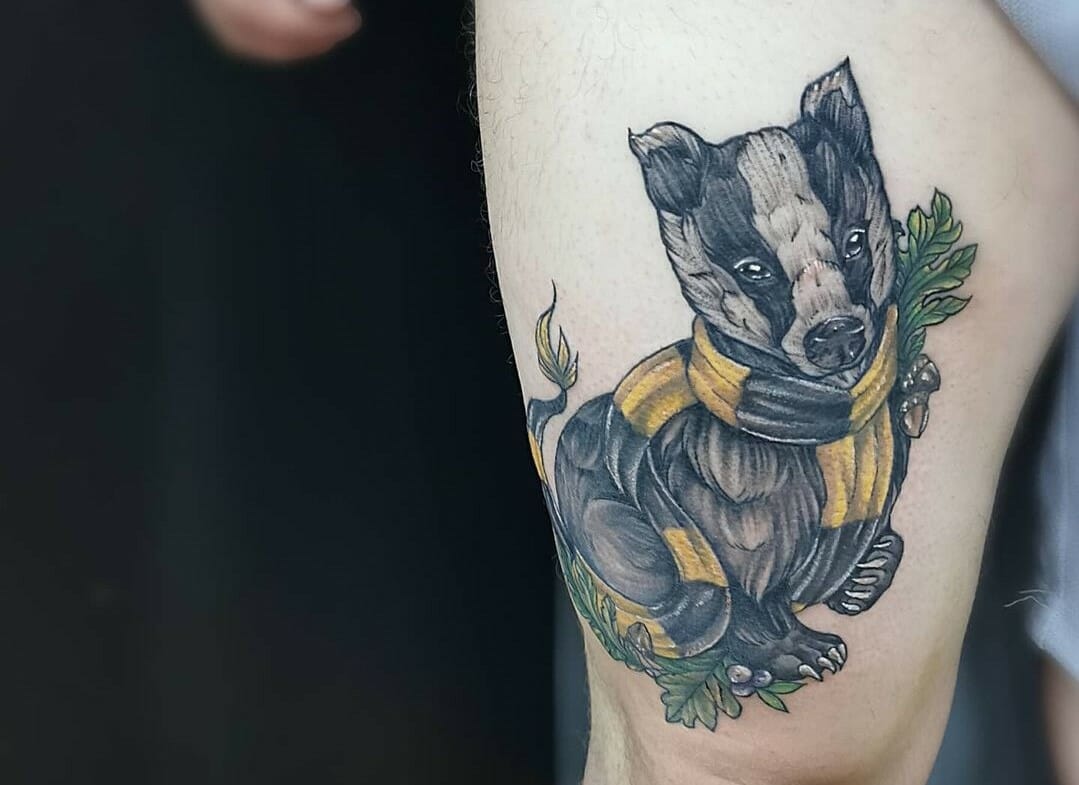 Hufflepuff tattoos, one of the four Hogwarts houses in Harry Potter’s magical world, has a loyal fan base.

Hufflepuff is known for being nice, hard-working, and patient. The house has also produced some very well-known wizards and witches.

This house, famed for its devoted, compassionate, and welcoming dispositions, housed some of Hogwarts School of Witchcraft and Wizardry’s most prominent wizards and witches, including fan-favorite Cedric Digory. Their motto is, “You might belong in Hufflepuff, where they are just and loyal. Those patient Hufflepuffs are true, and unafraid of toil.” This house is critical to Hogwarts’ overall equilibrium, and fans are well aware of this. The Hufflepuff house is noted for its patience, loyalty, and fairness. Fans who recognize those characteristics in themselves will frequently label themselves as Hufflepuffs.

Every Hufflepuff fan knows that the badger is the Hufflepuff logo. The idea here is a really simple design that looks lovely and elegant at the same time. The design doesn’t have any color variations and uses the default color to draw this pretty tattoo. Yet the tattoo looks pretty stunning and neat to the viewer because of the pattern and structure. Minimalists in 2021 would love this tattoo design. This would be a perfect design for you if you love the Hufflepuff house but also like keeping things simple and don’t like a lot of flairs.

This tattoo is a combination of all the houses and gives us this amazing masterpiece with the famous dialogue of Dumbledore as he consoles Harry to take his mind off of Tom Riddle. The tattoo gives a watercolor effect to houses which is of course the talent of the tattoo artist. The writing at the top and bottom absolutely completes the whole tattoo and gives it definition. It holds the whole picture together and also provides a more emotional insight into the meaning of the tattoo as a whole. It can as well be a Gryffindor tattoo or a Slytherin tattoo or a Ravenclaw tattoo, even though Slytherin doesn’t really get along with Hufflepuff that well.

If you want an elaborate and colorful tattoo that completes your 2021 look, this is just for you. The color sequence in this tattoo is vibrant and bright. It shows mostly yellow and brings out that color the most. Yellow is the color of Hufflepuff so even though it is a tattoo with all the houses together, the Hufflepuff colors are more on the forefront as compared to the colors of the rest of the houses. The tattoo includes a magnificent portrayal of the Hogwarts castle and also a couple of symbols like the elder wand, Harry’s glasses and his scar, Harry’s Hogwarts letter, and other things with which Harry Potter fans will connect for sure. The wonderful drawing of the snitch is also very spectacular.

This beautiful tattoo is an amazing combination of both minimalist as well as colorful and bright. The Hufflepuff colors are yellow and grey. Yellow is a bright and beautiful color that can catch anyone’s eye. This Hufflepuff tattoo has a simple design yet looks complicated and full of tiny details. The major remark would be the badger which decorates the tattoo and is at the very center. It is definitely not your typical badger and is drawn with extreme detail. The best part about the tattoo is the color scheme which truly brings out the Hufflepuff motto.

This tattoo is an amazing show of artistry and talent. The artwork, design, and colors of this tattoo are magnificent and have the ability to make you indulge yourself in the fandom. The beauty of the Hufflepuff chalice tattoo is the bright shiny yellow chalice with the badger in the front. The badger is the logo of Hufflepuff and is shown sitting on a pile of leaves. On top of the chalice is a wonderfully drawn Hogwarts castle with sparkly stars surrounding it. There is also a tall plant to decorate the chalice. The final touch is the crescent moon on the bottom right of the chalice which completes the tattoo with finesse.

This tattoo takes the little things into consideration. The overall hue is yellow just like the Hufflepuff colors. The badger has a slight smile on his face which makes the overall tattoo look so much cuter. The badger is looking up and has stars all around it. The best part of the tattoo is the way the badger is embedded in the symbol of the deathly hallows. This looks like the ultimate Harry Potter tattoo!

This cute Hufflepuff badger tattoo is just too adorable to resist. The Hufflepuff tattoo badger shown in this picture isn’t exactly the animal in the franchise but rather a cute rendition of the animal. The badger is drawn wearing the Hufflepuff scarf which we have seen the students wearing multiple times. It also has a wand in its paw. The glasses he is wearing are Harry Potter’s along with the scar on his forehead. The word ‘Always’ also reminds us of Snape and takes us back to the moment when this word was spoken by Snape to Professor Dumbledore. What a revelation this was! Phew!

This tattoo shows the footprints that can be seen in the Marauder’s map that was first owned by James Potter and his friends and then later is owned by Harry. It is a simple and neat tattoo with the word Hufflepuff written at the center. The yellow also works perfectly, celebrating the color of the parchment on which the Marauder’s map is laid.

Like Sonic the hedgehog and Hufflepuff? This tattoo gets them both together and blends them to make this iconic duo. Sonic the hedgehog isn’t exactly a badger but it is still from the same family. It is a fun and unique tattoo that you should certainly try out.

The badger in the Hufflepuff logo was the Patronus of Helga Hufflepuff, one of the four founders of Hogwarts. She was the head of Hufflepuff which is why the badger is the symbol of the Hufflepuff house. This tattoo gives such intricate details to the badger it is amazing to behold. The logo is topped with a crown which gives it even more grace and elegance. The badger holding on to the Hufflepuff title is a symbol of strength and support.

Hufflepuff tattoos totally bring out the Harry Potter fans and especially readers who grew fond of the house Hufflepuff in particular. Known to produce fair, hard-working, and well-natured witches and wizards, it is natural for a reader to grow close to the house and also reflect similar personality traits. You can go crazy and play around with your ideas when you get a tattoo. Here are some ideas to go with: