10 Best Horned Owl Tattoo Ideas That Will Blow Your Mind! 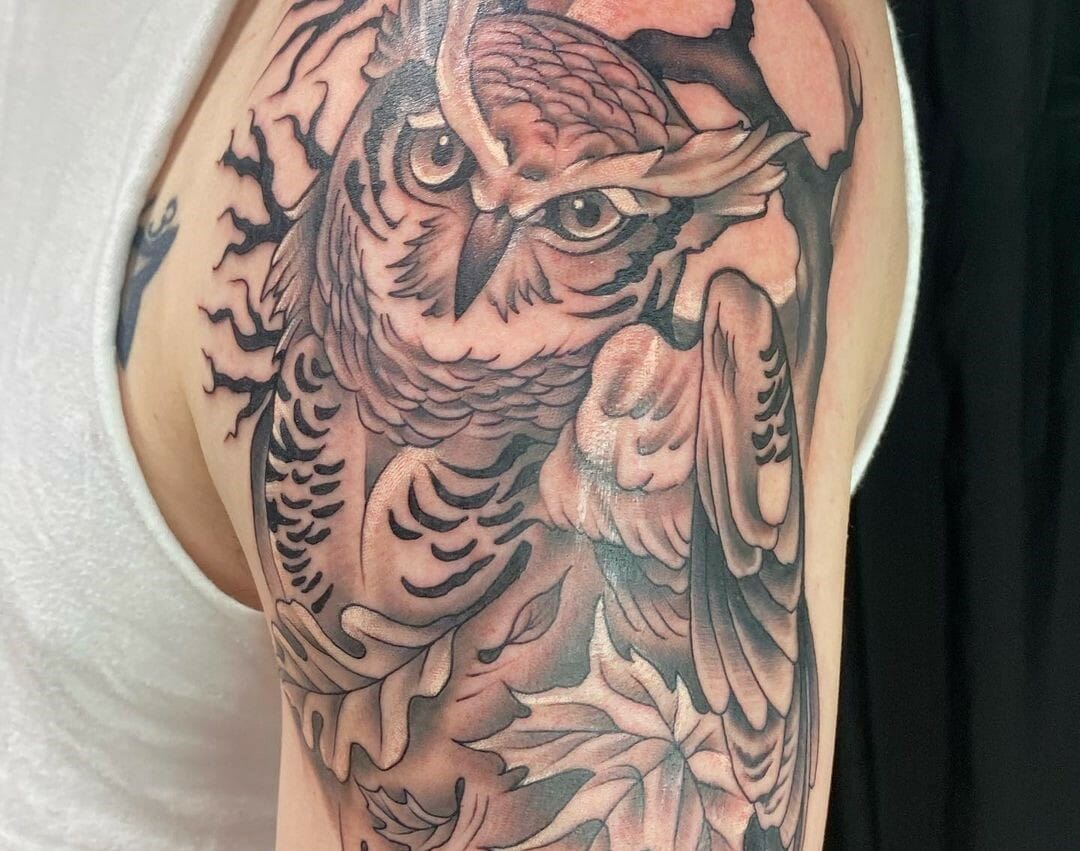 Enamoured with horned owls and their diverse symbolism? How about a horned owl tattoo that will help you express your love for such esoteric knowledge?

Almost all cultures across the world have associated the horned owl with wisdom and knowledge of the afterlife, primarily due to its plumicons, or unusual horn-like feathers which set it apart from other owls.

In Greek legends, the horned owl was the favourite sidekick of the Greek goddess Athena. This is why the Athena owl tattoo featuring the horned owl is quite popular among Greek myth enthusiasts.

On the other hand, Native American cultures and the Romans associate the horned owl with the afterlife, which is why pop culture adaptations of the horned owl myths set in the US and Rome have often shrouded the owl in an aura of death and doom. Twin Peaks, anyone?

Be it the tribal owl tattoos, or the watercolour ones, feel free to choose from some of our best owl tattoo designs and turn heads with the majestic symbolism.

An exemplary work of tattoo art, this tattoo design is highly intricate and depicts the horned owl in such a realistic manner that the ink almost stands out on the skin. Particularly commendable is the detailing in the eyes of this barn owl tattoo, making them look identical to the real-life version. Sprawling over the entirety of an arm, this tattoo deserves appreciation for the application of short and long strokes of black ink to accentuate the texture of the feathers, and the sharp curve of the beak, not to mention the intricately etched clock in the bottom.

This feral and intimidating horned owl thigh tattoo features the majestic creature of the night in its utmost splendour, its watchful eyes gauging the spectator every moment. Sketched with freehand, the tattoo is awe-inspiring in its evocation of sharp angles in the glance of the owl’s eyes and the bending of the hooked beak. The addition of tree branches metamorphosing into the claws of some mythical mysterious creature is all the more supportive to the meaningful symbolism of horned owls as mysterious birds and association with evil spirits. The background features coniferous trees looming over the horizon. The entire setting might remind one of David Lynch’s TV series Twin Peaks, which also featured a horned owl living among pine trees as the harbinger of death. Fans of the series can get this evil great horned owl tattoo to commemorate their love for the wonderful Lynchian take on the supernatural.

The Celtic mythology heralded these nocturnal birds as the guardian of the underworld. Probably the artist had this connotation in mind when they inked the simple owl tattoo listed here. The great horned owl in this realistic tattoo exudes vibes of darkness, death and afterlife, particularly due to the extensive use of grey and brown tones- natural colours that symbolise decay, and regeneration. However, what especially caught our eye about this tattoo was the use of the vibrant colours of orange and black to emphasise the sharp eyes of the horned owl. Hence, for the tattoo enthusiasts with a nihilist bend of mind, we strongly suggest getting inked with this tattoo to experience a phase of personal growth, leaving behind the dead past which no longer serves you.

A notch apart from the intimidating, fearsome horned owl tattoo that we usually see, this colorful owl tattoo showcases a distinct style of tattoo art full of creativity and liveliness. Soft hues of red surround the owl, manifested in the rose petals, and the tulips, making the great horned owl look disarming and of course, adorable. Can you detect the faint hint of a smile underneath those big eyes? Such is the ingenuity of the tattoo artist. We cannot help but gush over the use of gentle shades of brown and orange in contrast all over the bird, which accentuate its unique features, but also make it seem benevolent and warm.

Here’s another of our absolute favourites: the horned owl etched in watercolours! The best thing about watercolour tattoo designs is that your imagination will have no bounds when it comes to choosing colours. Of late, watercolour tattoos have stirred quite a buzz in social media, and the reason is the amount of versatility that can be achieved with the ink. Be it any symbol or image, watercolour tattoos can perfectly capture them, and the great horned owl is no exception! We love the way the vibrant, bold shades of blue on the head of the owl contrasts with the softer, subdued shades of brown and light orange. In fact, it is the blue that makes the horned owl tattoo art stand out on the skin.

Particularly commendable is the exquisite detailing of the anatomical structure of the owl’s body, especially the blend of vibrant hues with the line and dot work on black ink along the midriff. The inclusion of small leaves in alternate shades of red and yellow is reminiscent of the images we see in our drawing books, and the linework that highlights the primary and secondary veins on the leaves can make the entire tattoo an interesting subject for a study of nature.

It is quite unusual to see a horned owl amidst fruits and flowers, however, here we have one. The thing that is the most endearing about this small owl tattoo is the immense happiness that is evident in the expression of the owl, its eyes gleaming, the beak half-opened in what almost resembles a grin. The artist has used a multicolour palette to etch this forearm owl tattoo that extends to the shoulder as well. It is probably inspired by the traditional tribal owl tattoo which makes use of earthy tints of brown, black and red to emphasise the connection with nature.

Dying to ink your body with a funky image with subtextual deep meaning? Look no further! Our next selection, the cartoon version of the legendary three-eyed horn owl is simply irresistible! The three eyes of the owl represent the three phases of our life- the past, present and the future. And when a three-eyed owl is holding a candle, as shown in this tattoo, rest assured that it is symbolising an enlightened future. The splendid hues of greyish-blue, purple, green and yellow make for a wonderful kaleidoscope of colours that will keep the spectator’s attention glued to the tattoo.

This black and grey horned owl tattoo are wonderful in its realistic depiction of the bird. It depicts a horned owl perched on a branch, and looks almost like a pencil sketch, except on skin. Before you get yourself inked with a black and grey owl tattoo like this one, make sure that your tattoo artist is an expert in etching the variegated shades accurately. In this tattoo, for instance, the artist has masterfully inked the harsh and bold shades of feathers on the body of the owl, by short, deep strokes. The softer shades on the background and the leaves have been brought about by gentler strokes of the ink. It requires the right blend of black and white ink to bring out the greyish undertone of realistic tattoos and the artist has mastered the art clearly.

A form of tribal owl tattoos, this design in brown and black is marvellous in terms of its detailing. The softness in the gaze of the owl can be brought about only by a skilled artist, so ensure that you are in good hands while getting inked. Since brown ink spreads easily, it has to be contained by ample black ink, which is precisely the technique that the artist has used here. The stunning application of a variety of linework, short and long curved lines for the feathers, jagged lines for the flowers, and the complementary succession of shades is simply too wonderful not to be praised.

A perfect addition to your exposed shoulder blade, this small black linework tattoo of the horned owl is notable for its glossy and sleek appearance. The owl has been placed amidst natural surroundings roses and leaves to give it a more warm and friendly look. Everything about this owl, from its rounded, bead-like eyes, to its small wings, and ruffled plumicorns or upraised feathers, is stroked with short lines of black ink, making it look immensely cute. The texture of the rose petals is etched in black dotted lines in perfect precision, making the flora look life-like.

For those who love knowledge, traditionally acquired wisdom and metamorphosis into death, there can be no better choice than the horned owl for inking on the body. The wonderful appearance of the majestic horned owl and its natural surroundings make for a tattoo’s artist’s creative spree. If these horned owl tattoos have piqued your interest, do check out some similar yet unique ones: