10 Best Hitchhiker’s Guide To The Galaxy Tattoo Ideas That Will Blow Your Mind! 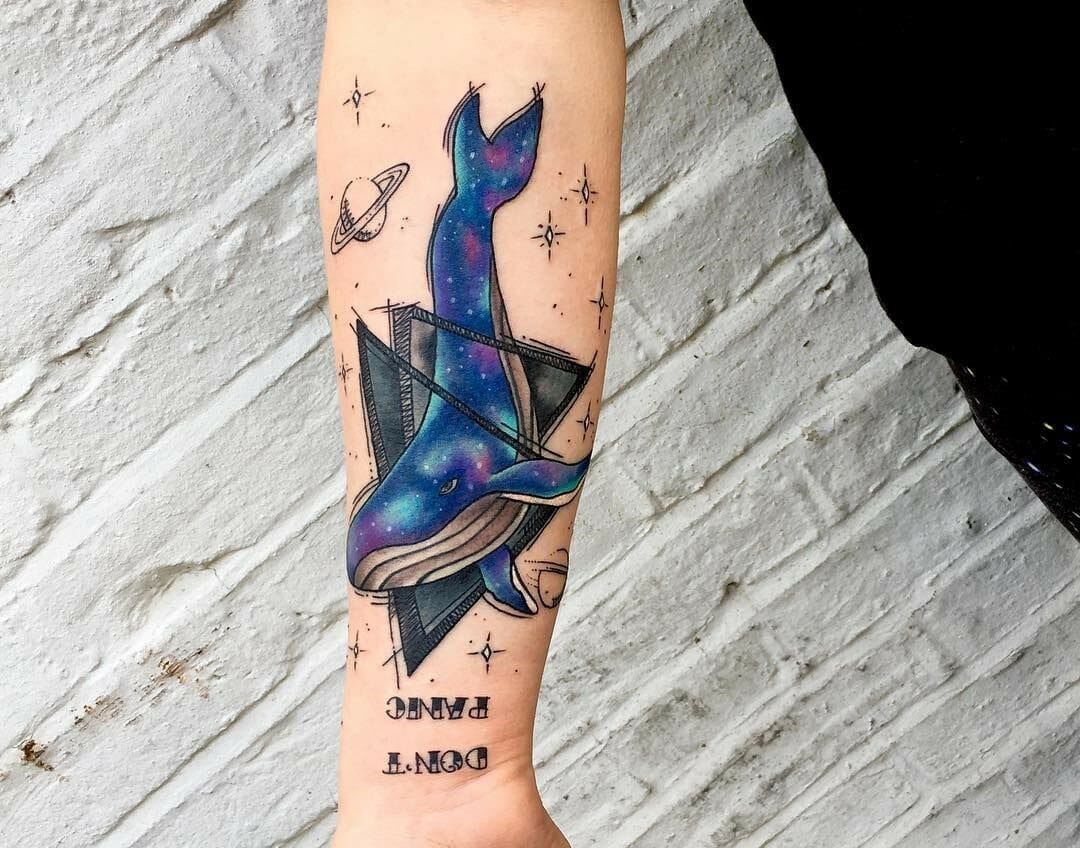 Are you a huge science fiction fan who has read all the classics? Then here are some amazing Hitchhiker’s Guide To The Galaxy tattoo ideas for you!

The Hitchhiker’s Guide To The Galaxy is one of the most well-loved comedy science-fiction books ever.

Written by Douglas Adams, the books follows the adventures of Arthur Dent who is the last surviving man on Earth after it was destroyed by a constructor fleet sent by the Vogon alien race. He is rescued by Ford Prefect and they hitchhike together by getting on a Vogon spacecraft.

After his rescue, Dent roams around the galaxy with numerous other characters like Trillian, Zaphod Beeblebrox, and Marvin, the Paranoid Android. This series of books have been adapted into a radio series, stage shows, comic books, TV series, computer games, and a 2005 feature film. The 2005 feature film starred well-known Hollywood actors like Martin Freeman, Sam Rockwell, Zooey Deschanel, Bill Nighy, and Alan Rickman.

Bright And Colourful Hitchhiker’s Guide To The Galaxy Tattoo Designs

The world of Hitchhiker’s Guide To The Galaxy is extremely cheerful and colourful as Arthur Dent moves across the universe in an epic adventure. The wonderful writing of Douglas Adams also helps the readers visualise a vibrant and vivid galaxy or universe that is full of colours. Therefore, if you want your tattoo to truly reflect the book, you should choose a colourful Hitchhiker’s Guide To The Galaxy tattoo design.

As can be seen in the picture above, the wearer has gotten an elaborate Hitchhiker’s Guide To The Galaxy book tattoo that covers the entire expanse of the side of their body. This colourful and elaborate tattoo would look amazing from afar.

Here are some more amazing ideas for a watercolour tattoo that would look amazing on your skin.

A blackwork tattoo is a unique and unconventional tattoo idea as the tattoo artist creates the design in a completely reverse manner. Here, the artist tattoos the entire skin with black ink but strategically leaves some portions of the skin blank. Thus, the artists set the design on the skin by contrasting it with a dark background. In the above image, the artist has done a stunning job of creating a lovely Hitchhiker’s Guide To The Galaxy tattoo with blackwork style.

Here are some awesome Blackwork Tattoo designs in case you want to experiment some more!

During his adventures, Arthur Dent learns that the Earth was a supercomputer created by Deep Thought, another supercomputer. Deep Thought was built to answer the question “Ultimate Question of Life, the Universe, and Everything”. After a lot of calculations, Deep Thought had given the answer ’42’. Arthur and his companions also roam around the universe to try and find the meaning behind the answer and the meaning of life and the universe itself. Consequently, you can also create a wonderful ’42’ tattoo for yourself by placing it behind your ear or on your arm.

Neotraditional tattoos are those tattoos that further improve upon and modify traditional American style tattoos. A neotraditional tattoo design includes more colourful ink and draws inspiration from different popular culture references. Consequently, if you are looking for some Hitchhiker’s Guide To The Galaxy tattoos, you can definitely ask your tattoo artist to create one for you in the neotraditional style if that is what you prefer.

Marvin, the Paranoid Android is an android robot who is one of the chief secondary characters in the book. He is a cute and depressed robot who is often seen with his head drooping down. While the android of the TV series is not that cute looking, you should check out the adorable versions of Marvin in the computer games, comics and the 2005 movie. With his round head and small body, Marvin would make a wonderful tattoo design if you are looking for Hitchhiker’s Guide To The Galaxy tattoos.

One of the most notable characters of the series is Agrajag who is killed by Arthur Dent hundreds of times and becomes reincarnated back to life again. One of the most famous dialogues in the series is when Agrajag takes the form of a bowl of petunias and accidentally falls, while thinking “Oh no, not again.” Consequently, if you want your Hitchhiker’s Guide To The Galaxy tattoo to be quite specific, you can definitely put a bowl of petunia into your tattoo.

A lot of tattoo lovers prefer to get their entire arm sleeve tattooed as it offers a lot of scope for visibility. In addition to that, tattoo artists also get plenty of space to work on and execute their vision. If you have a lot of symbols and references to Hitchhiker’s Guide To The Galaxy to express through your tattoo, then you can also choose an elaborate tattoo sleeve design for yourself.

If you have always wanted a tattoo based on a piece of literature that you really love, then you can definitely choose from these amazing Hitchhiker’s Guide To The Galaxy tattoos. After all, no other science-fiction book can inspire such lovely and colourful tattoos!