10 Best Hindi Elephant Tattoo Ideas That Will Blow Your Mind! 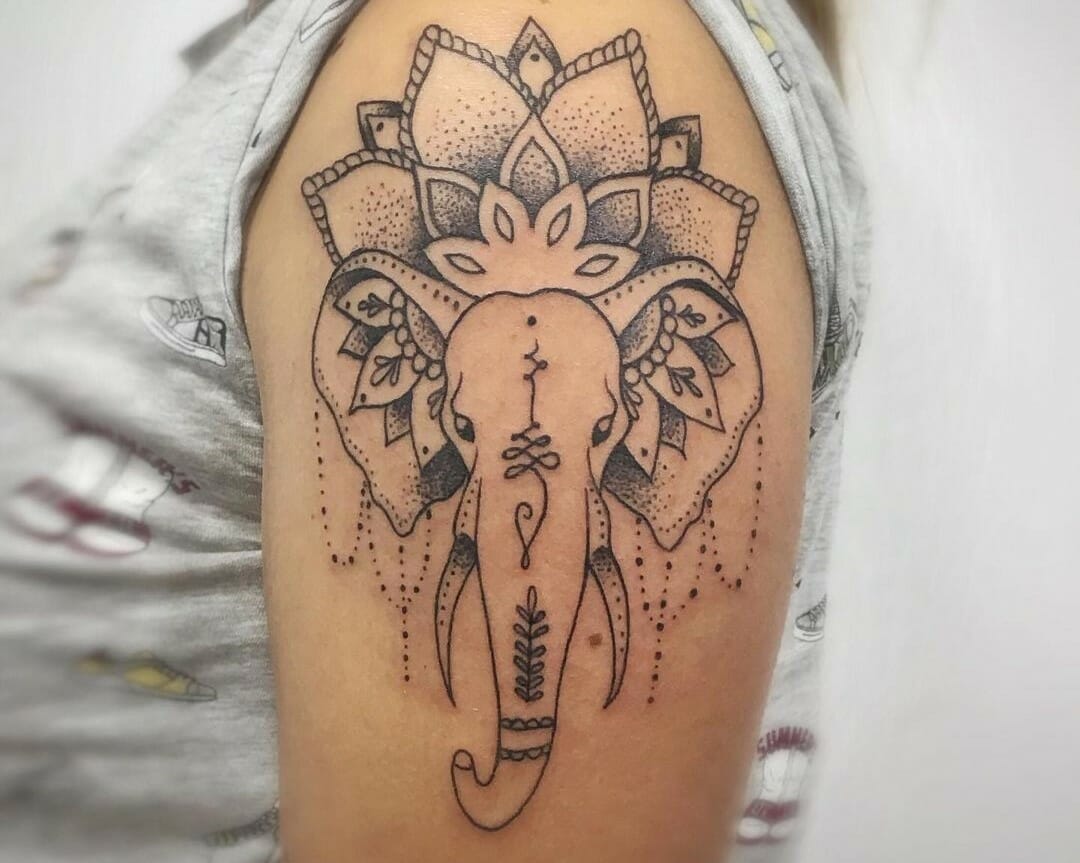 The most well known elephant tattoo represents Lord Ganesha, a deity of the Indian culture.

These Indian elephant is a sacred animal and these tattoo designs will blow your mind away. They are super detailed and have great meaning.

The tattoo styles usually include portraits of ganesha tattoos which is considered as a good fortune in the hindu religion. These elephants are a symbol of God who is known for removing obstacles from one’s life. They have many variations in incarnations however, the elephant tattoo is the most special considered in the Indian family values. Ganesha, meaning ‘Lord of the people’ have four arms, and an elephant face on a human’s body. The tattoos are quite detailed, and submits glory to the Hindu Lord.

Ganesha is believed to be a God of good luck, peace in one’s lives and prosperity. Therefore, the tattoo artist has put in a lot of efforts and courage to bring out the best tattoo.

This is a great idea for a sleeve tattoo. In this elephant tattoo, the tattoo artist has drawn an adult elephant who looks very wise and powerful. The elephant in this tattoo is standing on one leg on a blue lotus which is such a creative and elegant element of this tattoo. The crown, the jewelleries, anklets, etc., everything is gorgeous.

The fine strokes of the ‘Dhoti’ an Indian garment that the deity is wearing has also been executed with utmost perfection. The folds and shades makes it look realistic.

Overall, the tattoo is very vibrant and elegant and makes a good option for a sleeve tattoo as it is the perfect design for displaying it on the sleeve area.

In this elephant tattoo, the tattoo artist has glorified the Hindu deity ‘Ganesha’ with ample gold jewellery and ornaments to exemplify its appearance. The entire tattoo is a stunning masterpiece. The size of the tattoo is perfect for any large spaced area like the thigh or the torso or even the back of the body. The details of the crown and the choice of colours is breathtaking.

The tattoo artist has made the elephant figure with an enormous golden crown, golden earrings and golden chains. The detailings and the colour story of the crown is bold and loud. The sharp spikes coming out from all sides of the crown makes this tattoo look divine.

The tattoo artist has made the face using black and grey ink and has added creative small touches like red ‘tilak’ for the forehead and leaves patterns for the trunk and lastly blue ink for the eyes. The overall execution of the tattoo is stunning.

The Back Elephant Tattoo

The tattoo artist has done a fine job in detailing every nook and corner of the tattoo with utmost perfection. The deity, ‘Ganesha’ is in a sitting position with all its four arms out. Two of the hands have peacock feathers; one has a lotus and the fourth hand is raised out to bless the believers.

There is a huge neckpiece in this tattoo that has very fine detailing. There is a large ruby stone in the centre of the necklace which is covering the belly region.

We found this elephant tattoo to be both creative and a great skilled art. The fact that many people try to find good cover up tattoo suggestions, here is one for you. The tattoo artist has done a great job on using the existing tattoos as the background and making this on top of it. The elephant tattoo design is simple and minimalistic.

There is a large crown with beautiful details in it, then we have the elephant face with beautiful eyes, two tusks and a raised trunk. The deity has one hand raised in the sketch to bless the believers. To make this simple tattoo more intriguing, the tattoo artist has sprinkled some black ink over the tattoo to give it a creative effect.

What strikes the eye is the red spot in the centre of the tattoo which is absolutely stunning and is a fun, creative element in this tattoo.

This is quite a creative approach towards the elephant tattoo. The tattoo artist has made the design as a wrist accessory with the crown of the elephant looking like bangles on the wrist. The facial features are absolutely splendid and very realistic.

The use of blue ink for the eyes makes this tattoo surreal and so special. The creativity to use the trunk of the elephant and blend it into the middle finger is also very artistic. The details like one broken tusk, the Hindu symbol of ‘Om’ etc, captures the spiritualistic feelings in the tattoo keeping it modern by creating such an intricate hand design.

What a beautiful sleeve tattoo idea. This elephant tattoo looks incredible placed on the sleeves. Compared to most of the designs so far, there was only the facial portrait of the elephant’s face, whereas, in this tattoo, the tattoo artist has sketched out the entire body of Ganesha.

This tattoo is a divine tattoo. The tattoo artist has taken a glorious approach towards this tattoo where the elephant which has other meanings in the Indian culture has been portrayed as a deity. ‘Lord Ganesha’ is the name of the deity.

The entire tattoo is absolutely sublime and the tattoo artist has done a great job in executing the serenity of the deity through this tattoo. The detailing, shadings, outlines, etc are all spot on.

This is an absolute intricate piece of art. The tattoo artist has done a great job in executing the perfect facial expressions of the elephant in this tattoo. The crown over the head of the elephant is quite detailed. It resembles to a mandala style themed design.

The entire pattern of the crown is very symmetrical. The tattoo artist has bordered the outlines with thick strokes of black ink and has then diffused out the colour using shadings of the same ink but in lighter forms. The crown is attached to a ‘Mangteeka’ which is a headpiece jewellery in the Indian culture.

After the attention from the crown is moved away, the facial features are ready to mesmerise us. The tattoo artist has done a great job in accentuating simple features like the eyes of the elephant which makes the entire tattoo look quite realistic.

There is a tilak in the centre of the forehead which is a unique pattern made by the Hindus in the Indian culture to portray religious affiliation. There are two small tusks; one is fine and one is broken. The raised trunk has also been beautified using floral patterns.

The essence of the ears have been captured splendidly as they look absolutely like an elephant’s. The body of the elephant, which is actually a human figure has been covered in leaves to make the tattoo intriguing.

In this elephant tattoo, the tattoo artist has done a marvellous job in using black and red inks and also white for highlights. The entire tattoo is the portrait of the face of Ganesha and all his facial features are accentuated in this tattoo. At the very top, we have a huge glorious crown that is embedded with various jewels.

It has many interesting designs that has been executed symmetrically. At the very centre of the crown, the tattoo artist has drawn a marvellous ruby stone that makes the crown look more intriguing. In the facial features, we have broken tusks; a beautiful Indian culture tilak; beautiful eyes and a trunk where there are peacock feathers and leaf patterns.

In the ears, highlighting has been done splendidly through various inks and lastly there is a similar patterned necklace wrapped around its neck. The addition of some blings right beside the portrait makes it more interesting and the overall execution with the well thought colour theme is awesome.

This baby elephant Ganesha tattoo is an artistic piece of creation. The tattoo artist has added a creative element in this tattoo. The elephant is holding an instrument called ‘damru’ which is a smaller high-pitched version of a drum.

The facial expressions of the elephant shows that the animal figure is totally focused on the little musical instrument. The tattoo artist has portrayed the posture of the elephant in a mysterious manner. It looks like the elephant is levitating which is possible since it is no ordinary elephant; it is a figure of a deity.

The entire tattoo has been shaded beautifully using darker shades to enhance the physique and the facial features such as the trunk and the eyes. Overall, a fun and smart design for a sleeve tattoo idea. The four arms of this elephant are a fascinating feature that has been highlighted with a good flair.

The Back Art Of Indian Culture Elephant Tattoo

In this Indian elephant (Hindu God) tattoo, the tattoo artist has made a huge elephant tattoo at the entire back region of the human body. The tattoo has a huge crown, various ornaments and jewelleries covering it, four arms and a large belly.

The masterpiece can also be tattooed on the other side of the body; the torso region. This Hindi elephant tattoo is a wise God with courage and power that is portrayed in this picture. The tattoo artist has very remarkably detailed the facial features, trunk, tusk, etc.

If you’re still unsure and indecisive about the designs then here’s some more for you: