10 Best Hermes Wings Tattoo Ideas That Will Blow Your Mind! 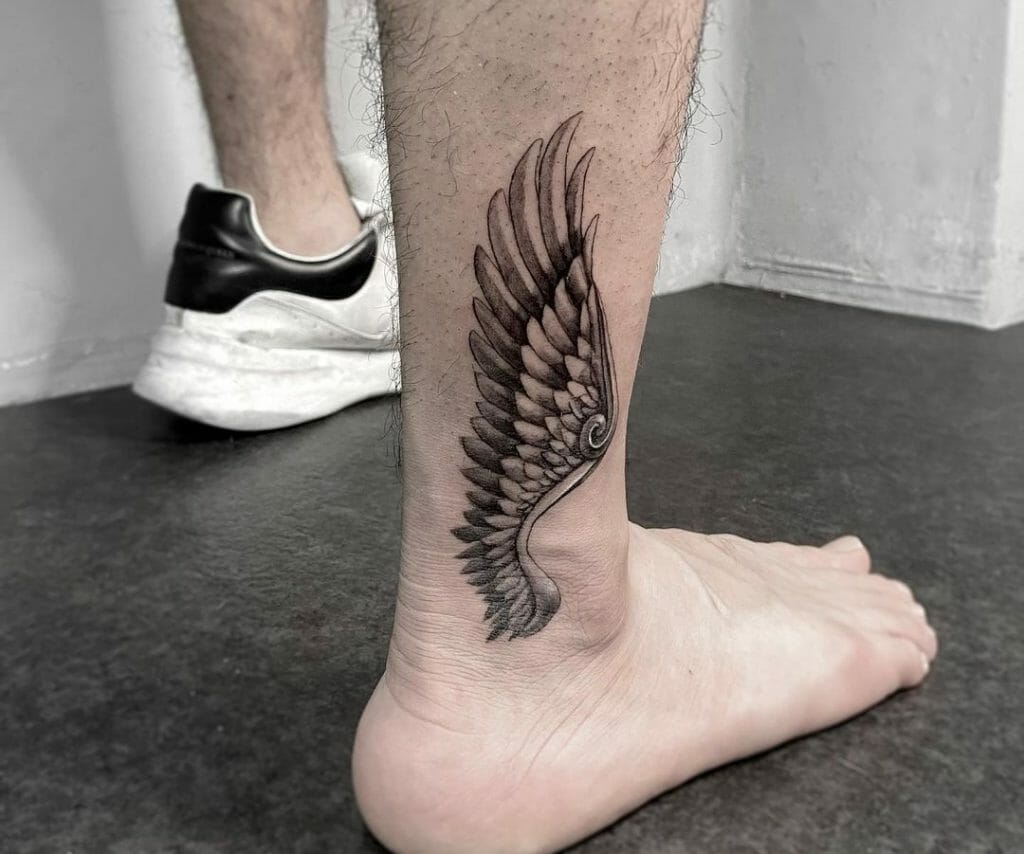 Are you looking for an untamed tattoo to represent your quest for freedom? Check out this list of Hermes wing tattoos that will be the perfect fit!

Hermes, the herald of the Gods of Ancient Greece is quite the character.

Multi-talented Hermes is the symbol of very high esteem and divine justice. The herald of the ancient gods is also the patron god of commerce and is known for his swiftness, both physical as well as mental!

Hermes is instantly recognisable by his most famous attribute, the winged sandals! The iconic sandals are adorned with two wings paying tribute to Hermes’s swiftness as he constantly shuttles between the mortal and divine realms. The other two attributes held dear to him are the rooster and the satchel or pouch. Sometimes, he is represented by a winged cap as well! The main attribute of this greek god remains the two wings especially on the ankles where his sandals would typically be!

Hermes tattoos symbolise a restless soul. Someone who’d like to know the world intimately is the Greek god Hermes exemplified! Hermes wings represent freedom. The freedom to explore, the freedom to break away from tradition and be a relentless wanderer!

Hermes the son of Zeus and Maia carried the powerful weight of being the Olympian god in charge of guiding souls to the realm of the dead. A Hermes tattoo also symbolises eloquence.

While Hermes is commonly represented in tattoo form by wings, another form of Hermes tattoo is the caduceus tattoo. Caduceus tattoos feature two snakes intertwined on a stick, consuming each other. This tattoo design symbolises the coexistence of the good and the evil in this world. The meaning of a Caduceus tattoo could also be a symbolism for the yin and yang.

The mercurial wiles of those who intend to get this tattoo indicate a strong desire to fly high and soar in glory! Most popular posts featuring this kind of tattoo will have the tattoo embossed on the ankle. However, it is also common to get on your calves or any other part of the body as per your liking. While winged tattoos sometimes take their inspiration from dragons, birds or angels, the Hermes inspired winged tattoos are usually picked by those who would like to immortalise their love for absolute and untamed freedom.

The prestigious culture of the Romans also refers to Hermes as the God Mercury. The meaning of the Hermes symbol remains the same in both cultures.

A Hermes wings tattoo is the perfect fit for you if you are a free spirit who simply cannot be tamed!

This is the perfect set of twin wings on both ankles for those who wish to immortalise their love for soaring high and breaking away into the vast expanse of this universe. The tattoo is simple yet classy. It is sure to attract eyeballs where ever you go. Make sure to lose your shoes and socks to flaunt this gorgeous pair of wings from time to time!

This realistic representation of Hermes’s winged gladiators is perfection! The shading on the wings is intense. The tattoo gives off greek god vibes for sure. The placement of this monochromatic tattoo is perfect for those looking for a sleek yet impactful design.

This tattoo is a work of genius! The nuts and bolts attached to Hermes wings symbolise flexibility and agility. Hermes is believed to be the patron god of sports by many. The colour palette for this clever tattoo on the calf is vibrant with bright red and yellow. The black tinges on the wings add a marvellous contrast to the colour palette.

This tattoo is a splash of colours. For those who are looking for a Hermes tattoo with a twist, look no further! The metallic undertones of the teal, red and orange are full of drama. The strokes of black on the wings add a charming effect. The wings are reminiscent of a phoenix rising from its ashes. The placement of this tattoo is one of the many elements that makes it a popular choice, especially among men.

This tattoo is perfect for women who are looking for Hermes tattoo inspiration. The splash of magical blue and posh pink is femininity redefined. The intense dark shading on the wings adds a strong and impactful effect to the overall look of this tattoo.

This Hermes tattoo is sharp and memorable. The bust of the eagle on the wing of Hermes, has eyes that pierce into souls. The fierce nature of the eagle complements the free-spiritedness of Hermes and makes for a wonderful collaboration in terms of both the design as well as the meaning the tattoo represents. This unique tattoo is a brilliant choice for the fierce free birds.

This tattoo is beautiful, delicate and bold at the same time. The tattoo has a dainty appearance but us packed with details. The shading on the caduceus is gentle and almost fades into the background at points. This tattoo is gender-neutral and can be recreated on any part of your body, as you wish!

This Hermes wing tattoo design is a more intense version of the image above. The ink used is many shades darker and the shading is epic. The placement of this tattoo is also perfect and uses up the space efficiently. If you like this design you may also consider checking out realistic wings tattoo ankle Hermes for men.

This classic tattoo design features Hermes’s golden gladiators with the wings attached . This clever design is meant for those with a special love for this trickster greek god. The tattoo has a masculine tone to it. The tiny layer of gold lining the wings adds a regal touch to this tattoo. The placement of this tattoo as shown in the image is as clever as the design itself.

This mystical piece is truly a work of art. The image gives an elusive appearance because the ankle seems to appear out of thin air. The wing resembles a burst of flames. The monotone colour palette adds oodles of personality to this cool tattoo design.

This unique element of this tattoo is the structured appearance of the wings. The tattoo is neat and a great choice for men with well-toned leg muscles. The tattoo is bold and is sure to attraction a lot of attention to the wearer. The shading on this tattoo requires skill so make sure you choose your tattoo artist carefully.

If you are still looking for more Hermes wings tattoo designs then you are clearly difficult to please! But no worries, we got you covered in the list below: