10 Best Hellsing Tattoo Ideas That Will Blow Your Mind! 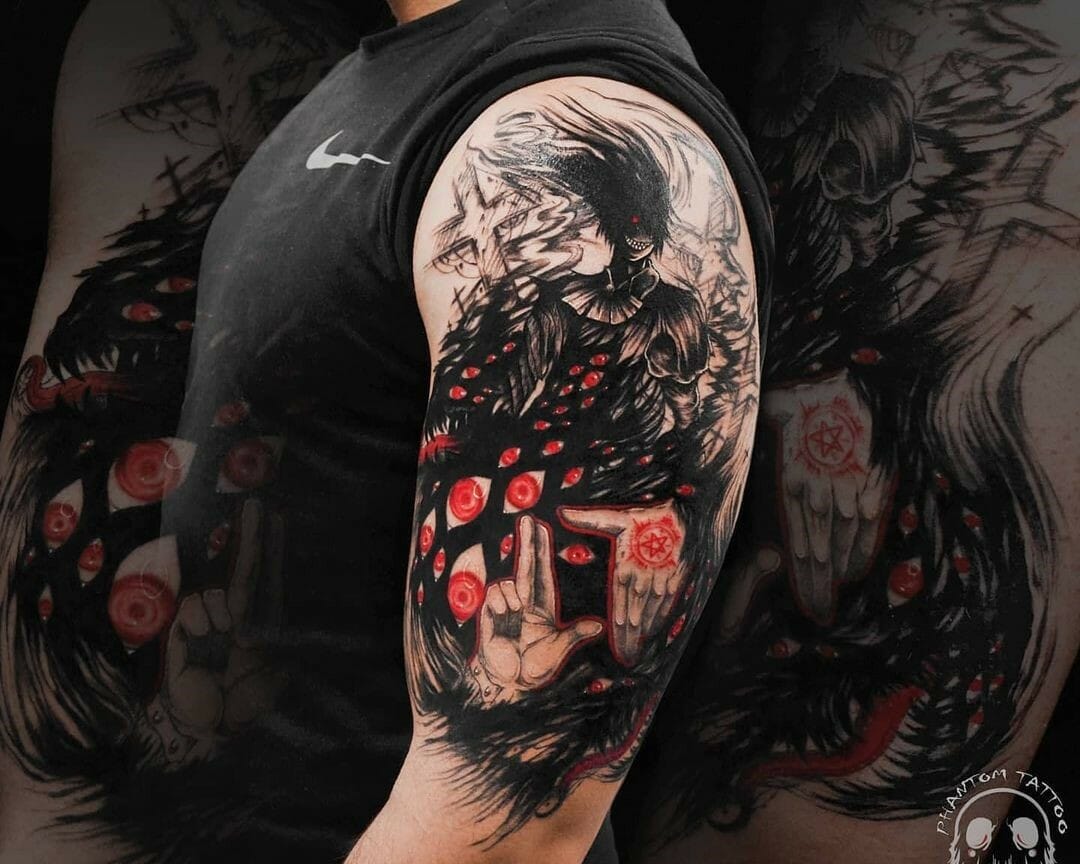 If you have plans to get a Hellsing tattoo and always wanted to get one, then be glad because we have a list of them in this article.

Hellsing is a renowned anime and manga series created by Kouta Hirano.

They had plans to make the anime before the manga was completely written, so many chapters were still left. Hence, they had to make a new plan to include the new ones into a new anime ‘Hellsing Ultimate’. The fans were surely glad about it as they wanted the series to stay anyway. If you’re a fan and looking for a Hellsing design to tattoo, then we got the unique and new ones, so read on.

Body art tattoos take more than a day’s work to finish, but it gives the tattoo artists the space and freedom to work their best. The results can be drop-dead gorgeous at times, as evident from the picture above. These photos of gorgeous Hellsing tattoo drawn across the entire back of the wearer. The tattoo includes the protagonist of the anime, Alucard, his iconic hands, eyes and gun, his dog, Baskerville or The Black Dog, and the night sky behind them with flying bats.

Alucard is actually Count Dracula from the stories by Bram Stoker that we read in childhood. He is reimagined in the Hellsing anime as it’s protagonist. In the series, he, the most powerful vampire, works with others from the Hellsing Organization to fight supernatural beings. The picture above shows a forearm sleeve tattoo containing Alucard, the protagonist of the anime. A gun in his hand, Alucard has one eye open and the teeth of his dog Baskerville can be seen above.

Hellsing Ultimate is the OVA series of the Hellsing anime that follows the story from the Manga. Hence, many fans choose to get a sketch-like tattoo, like the picture above. It is a beautiful tattoo of the anime’s protagonist, Alucard. The version of Alucard in this tattoo has long hair, his thousands eyes open, and his faithful dog, Baskerville beside him. This Hellsing Ultimate tattoo has mostly been drawn in black ink other than the eyes and the shading work has been done in such a way that it’s looking like a sketch.

Alucard, the protagonist of the anime is always seen wearing gloves with a tattoo inscribed on it. Alucard is a form-changing vampire, so it can be said that his attire is essentially a part of him and the tattoo is a branding of Hellsing Organization. Hence, Alucard’s hands hold a significance to the story plot. The photos above show a simple tattoo of just the hands of Alucard in gloves where the iconic Hellsing emblem tattoo. A glowing eye of Alucard has also been included in the design.

Alucard is able to change his form at his will into animals, like snakes, bats, or hellhounds, a little girl, and even a shapeless mass of darkness. The little girl, or otherwise known by ‘Girlycard’ is however the most famous. The picture above contains four different tattoos for four different anime characters. The rightmost tattoo is of Alucard’s female form. She still holds the many eyes and the tattooed gloves on her hands. The colour and shading work on all the tattoos have been done impeccably well.

Seras Victoria is another of the main protagonists of the anime, Hellsing. She is also a vampire who hunts supernatural beings with Alucard and others for the Hellsing Organization. The picture above is of a half sleeve Alucard and Seras tattoo. It’s mostly an outline tattoo with Alucard’s hair in solid black ink. The Hellsing symbol on Alucard’s gloves can be seen above his hat and Seras in a sitting position with a gun in hand has been drawn below.

The Hellsing was first released as a manga series by Kouta Hirano back in 1997. The manga became quite popular and it was turned into an anime in 2001 before the manga was finished in 2008.hi The picture above shows a black ink tattoo of Alucard. The face of Alucard in the tattoo has been drawn inside of a square boundary. Other than on his glasses, no shading work has been done, only solid black colour has been used. The tattoo looks like a picture out of the Hellsing manga.

Sleeve tattoos are one of the most common tattoos chosen by people. Mainly because hands are one of the most suitable places of the body for a tattoo to be seen properly. Additionally, there are many options, like 3/4 sleeve, half sleeve, or full sleeve and depending on the length, tattoo artists get enough liberty to work their magic. The picture above is of a forearm sleeve tattoo of Alucard. The design of Alucard has been taken from the anime. The colouring and shading work has been done quite brilliantly.

The history of black ink tattoos leads to when tattoos were first invented. Watercolour tattoos, colour bomb tattoos, and many more coloured tattooing styles have been found, but black ink tattoos remains ever so popular. The picture above is of a long sleeve tattoo on the upper arm of the wearer. The large black ink Alucard tattoo is drawn like a sketch and Alucard’s thousand eyes have been drawn above his hat over a large area.

If you have found the design you wanted and plan on getting tattooed, then visit a tattoo artist today. However, if you’re still looking for some more suggestions of other tattoo ideas then you can opt for ‘Hellsing face smashed off on wall’ tattoo, Hellsing police girl tattoo, and tattoos of your favourite Hellsing character, like Integra, Zorin Blitz, Alexander Anderson, and more.