10 Best Hawk Feather Tattoo Ideas That Will Blow Your Mind! 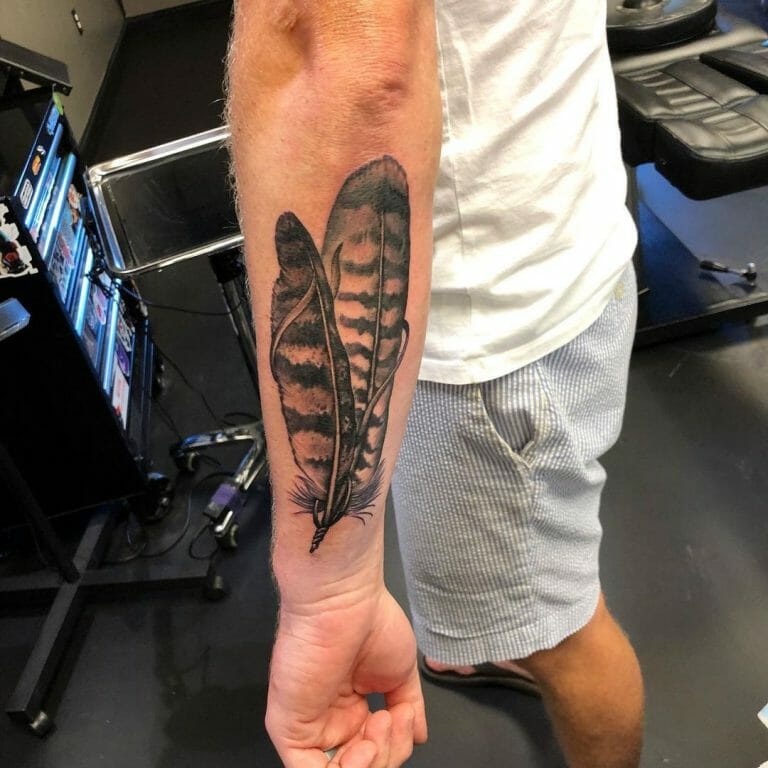 If you are looking to be ink-enchanted by the charms of a hawk feather, we have some splendid tattoo ideas just for you!

Being simple and neat in appearance, feather tattoos are very popular amongst every age group of people.

The different meanings behind different feathers make the tattoos deeply symbolic while leaving you with decent body adornments. The tattoo of a hawk feather carries countless meanings attached to it when it comes to spiritual representations.

Generally, a bird feather symbolizes peace, freedom and independence. But if you pair one with other elements, you can tap into the world of various sacred meanings they hold. You can also flaunt a solo feather tattoo and it’ll surely make you stand out in a crowd. A hawk feather is not only a spectacular ink art to look at but also it speaks of your personality without having to express it any other way. In short, it becomes your emblem.

A single feather tattoo delineated with black ink is one of the oldest tattoo ideas, making this a universal classic. Feather tattoos are popular among both men and women equally because of their versatility.

This grey-toned tattoo of a hawk feather here is drawn on the forearm. But you can have it painted on your shoulder, ribs, upper arm, feet, back anywhere while customizing the size according to your taste.

If you’re having a feather tattoo, hawk feather is one of the best choices. It depicts protection, encouragement and swiftness as well as psychic abilities. The tattoo in this picture looks almost abstract, bordered with a dark outline. The inside is layered with dark and light grey patches. If you want to make the best of your next tattoo then go have this Hawk Feather Achromatic Tattoo done already.

This beautiful tattoo has three important elements, the dreamcatcher’s web, the hawk feather and the peacock feather.

In many cultures, the dreamcatcher is used as a protective charm for infants. It is a willow hoop on which intricate web or net is handwoven. It is often decorated with feathers and beads that are considered sacred.

According to the Ojibwe legend, the woven spiderweb-like pattern on a dreamcatcher has protective charms as it catches any harm present in the air. So they are usually hung over a cradle or headboard of a bed as protection. They often symbolize healing and hope and are presented as gifts. In this tattoo, the web looks like a tree which is a symbol of honouring one’s memory.

The feather of a hawk is seen as the messenger of one’s guardian angel. It passes the message that one is being watched over by his ancestors. It is there to tell you that you are never really alone as your guardian angel is there to protect you. The usage of red ink here indicates that it is a red tail hawk feather tattoo.

A peacock feather symbolizes power, beauty and divinity. It is believed to protect one from evil spirits and negative energies. The peacock feather not only possesses healing energy but also is a harbinger of good luck, balance and harmony in one’s life. The usage of blue and green ink here makes looks like a real peacock feather.

The feather of a red-tailed hawk is considered sacred in Native American culture. It represents good health and fortune. This particular bird is considered to be a power animal as well.

This colourful feather tattoo consists of twin feathers. The golden-red colour of these feathers is highlighted with black patches along the shaft. The colours become lighter towards the base and the tips have wide black patches across them. This is a perfect feather tattoo for your neck or upper arm as they have a wider canvas area for this vibrant art piece. This is surely going to look phenomenal on anyone.

A tattoo of a thistle bundle paired with a hawk feather is the perfect example of balance. It instantly reflects one’s soft heart and strong personality at the same time.

Thistle is the floral emblem of Scotland and is known to represent love, youth, joy, truth, appreciation, and consistency. Thistles are a group of flowering plants consisting of prickly leaves. The flowers are bright purple in colour.

This monochrome bundle tattoo is no less brilliant than a coloured one. The light coloured hawk feather with bold stripes on it, sits in beautiful harmony with the weed flower and leaves. It looks like a beautiful present and you can almost experience the whiff of the wild.

So, set your wild heart free and start looking for the perfect Picasso to paint nature on your skin.

If you are looking for feather tattoos that’ll complement both your delicate nature and strong will, we have just the idea.

A hawk feather is a sign of encouragement. It tells you to fly high and to never look back.

Eagle feathers carry messages of courage and strength. As we know eagles have super-sharp eyesight which also adds to the quality of focusing on one’s goals. They represent the strength of character and authenticity as well.

The beauty of this hawk and eagle feather tattoo here is that it represents strength in the most delicate way possible. The eagle feather is much lighter in colour while the hawk feather is much darker and striped. Their contrast captures the symbolic meaning of harmony among contradictions.

So, your search for achromatic feather tattoos ends here as this checks all the boxes.

What we have here is a straight-up Tattooception. This tattoo consists of a tattooed hand holding a crystal globe with a hawk feather on it. The globe is protected by a snake. There’s a distinct eye and a crescent moon tattooed on the hand. We can also see some jewels and chains interlinked with the fingers.

The crystal globe has grey waves on it, giving it a light and shadow effect which indicates embedded mystical powers.

Snakes represent the transformation of energy and power in fortune-telling. The crystal ball on the hand of a seer surrounded by a snake speaks of evolving nature of a person.

The presence of the hawk feather establishes a spiritual connection between mother nature and her child as they are a symbol of psychic gifts as well.

The moon represents emotions and the eye, the window of the soul radiates strong authenticity. The interlinked chain with male and female symbols hanging from it speaks of balance.

This feather tattoo is one of a kind. The detailed design adds another dimension to it. Surely this would do justice to someone with a bold, evolving personality. It’s time for an ink dive.

The possibilities are endless with this particular floral feather tattoo’s charm as it has more than one element in it.

The base of the tattoo is a compass with its arrow pointing downwards. The compass is a symbol of guidance because of its ability to guide you in the right direction.

Above the compass, there’s a blooming flower. This floral part represents artistic self-expression.

On the top, we have the dark-tipped hawk feather as if it’s keeping watch over the body.

This tattoo is a must for all the travellers and explorers out there. If you are one of those curious souls, then congrats. This tattoo is just for you.

Let’s just be honest, there are too many choices when it comes to feathers. And some of us are genuinely in love with all the birds out there and it’s hard for us to choose one particular feather to put on our skin. So, what’s better than one feather? Two feathers! And this feather tattoo here is particularly for those who have a love for owls as well as hawks.

A hawk feather tells you to tap into your intuitive world. It indicates inner wisdom and the mental strength one holds.

Owls have the reputation for being wise and they also are excellent hunters. Owl feathers are often incorporated in many rituals and ceremonies as they represent wisdom and protection. They also serve as an emblem of knowledge and truth.

This feather tattoo consists of an owl feather and a hawk feather bound together which is a clear indication of the quality of looking inward. It makes this untinged tattoo design perfect for your inner arm art. Inking yourself with this will give the message of your inner treasure that you nurture and protect which also serves you back. So find yourself an artist who can recreate this hawk and owl feather tattoo as your favourite armour (pun intended).

Are you looking for Native American feather tattoos that’ll help you honour their history while keeping it simple? We have here the perfect feather tattoo just for you.

In Native American culture, the hawk symbol is depicted as the Protector of Mother Earth and her children. They believe that hawks are associated with natural forces like rain, thunder and lightning.

Bird feathers always had a deep influence on Native American traditions. Even to this day hawk and eagle feathers are the most popular ones among the indigenous people.

We all know that Native Americans are some of the best warriors that walked the Earth. Their headdress is a well-known symbol of strength and bravery. Native American feather headdresses are extremely influential because they have been worn by the most powerful members of the tribe and they are made of bird feathers and leather.

This tattoo here is of a red hawk feather with brown patches on it. A leather string is woven into the feather shaft that gives it the original indigenous charm. The string has formed a spiral curve around the feather, cradling it closely. And the feather looks like it is waiting to be woven into a glorious headdress of an honourable chief. Wearing it on your sleeve would be the best way of showing your respect to the Native Americans while avoiding any kind of cultural appropriation altogether.

So, what are you waiting for? Get inked!

This tattoo is special on its own account. Because it is all-natural and machine free.

It’s a small feather tattoo on feet that is simple and unique. The lower part of the tattoo is grey and the upper part is almost white. Close-sitting hand-poked dots create the grey illusion while the light coloured part has very few dots in them.

There can’t be a better way to embrace nature than getting your tattoo done naturally.

A hawk feather comes with the message of swift actions. So, no more waiting. Fix an appointment with your favourite tattoo artist, today!

If you love feather tattoos or feathers in general then these tattoos would be best suited for you. Their simplicity, detailing, symbolism and charm is undeniable. Pick your favourite tattoo and let the awesomeness speak for itself.