10 best Hawaiian Shark Tattoo Ideas That Will Blow Your Mind! 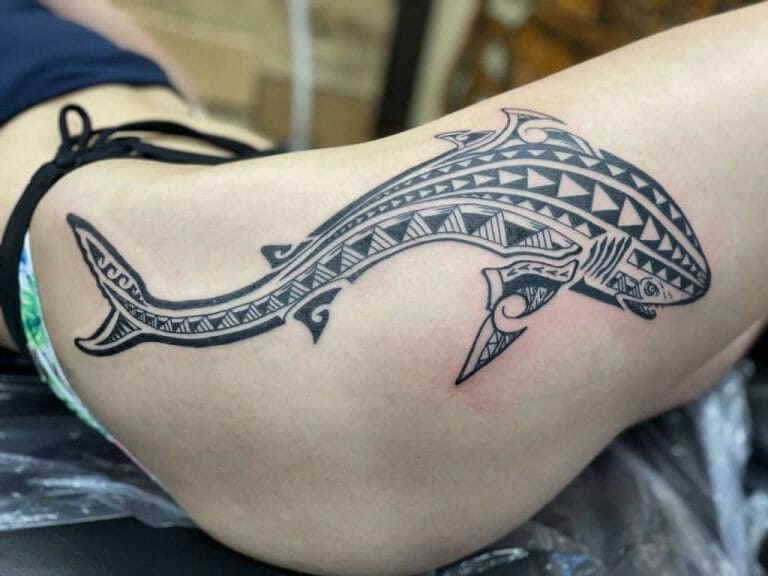 Discover some of the coolest and the most ostentatious Hawaiian Shark Tattoos you just can′t look away from.

In the Hawaiin Islands, tattoos are known as Kakau, part of the Polynesian cultures and Polynesian people.

A Hawaiian Shark Tattoo has a historical presence of power. The Polynesian or the Hawaiian culture confers the shark in a highly admirable light.

If we think out of the box and want to learn something new about Polynesian tattoos and their culture then it would begin with the word “Aumakua”. For the Polynesian cultures, the “Aumakua” is a guardian spirit or the protector of families.

This tattoo may be worn in two ways. It might be only the shark′s teeth or the whole shark. When only the teeth are used, the tattoo takes on a distinct geometrical allure.

However, like with other Polynesian tribal patterns, the teeth may be evolved into the finest curves as if produced by the ocean′s waves. Of course, in the guise of a whole shark, there is plenty of potential for artistic expression.

We′ve curated some of the most majestic body art of Polynesian Sharks so, together we can explore the symbolic meaning that represents the Polynesian or Hawaiian tribes. Inspired by the history of the ancestors, the Polynesian Shark Tattoos have become a significant part of the Hawaiin tribal tattoo as motifs.

This stunning piece of artwork definitely brings out and highlights the contours of the hip and thighs; quite possibly one of the most sensuous designs in Polynesian tattooing.

The artist created a beautiful Polynesian Shark shape, tattooed together with elegant Polynesian tribal patterns that make for a smooth, pointed-edged shape. The Kakau Tattoos are unique in that they form and overlay various components of tribal designs into a single bigger piece.

This intriguing technique results in a Pacific Islander Tattoo style that is distinctive to the Hawaiian Islands.

Together with the Polynesian Shark, the artist also incorporated other elements like tropical flowers and leaves, a huge hawk and a turtle; all of which are native to the oceans and the Hawaiin Islands.

How gorgeous does this Polynesian Shark with the Plumeria look? It is rather hard to look away from the intricacies of this Hawaiian Tribal Shark Tattoo.

The artist has created stunning artwork, on the back of the wearer (such an ideal placement). It highlights the contours of the spine and is a major attention-grabber. Together with the blue Plumeria, the creativity of the Polynesian elements is a perfect example of the variations tribal tattoos have.

Small repetitive patterns of arrowheads are used along with other patterns to create the silhouette of a shark, while the blue Plumerias hold the centrepiece.

Despite its simple and typical Polynesian patterns, the Polynesian tattoo still manages to look glorious and sophisticated.

It has a dual-sided pattern where the artist etches simple, thin-lined patterns for one half of the Polynesian Shark and dark, bold etchings for the other half. Together, they make for a traditional Polynesian pattern.

It is ideal for those who are getting tattooed for the first time and want to tattoo a design that holds symbolic value. Seeing as sharks in Hawaii or Polynesia represent guardianship, direction, and power, as well as ferocity; nevertheless, in many cultures, they are also emblems of adaptation.

Such a simple pattern appeals to many people who prefer elegantly scripted patterns but nothing too elaborate.

The Polynesian tribal shark tattoo should never be considered a fashion statement. It is steeped in cultural history. It is linked to the soul of the individual who owns it. There is no greater comfort than knowing that your guardian soul is melded inside your skin.

This huge, stunning piece looks especially elegant because of the contrast between the red and black tones. The blend of thick and thin lines create a beautiful range of patterns that eventually turn into an ostentatious art piece of a Polynesian Tattoo.

Ideal for a thigh placement or a back placement, seeing as they provide the most space for an artist to get creative.

Such a fearful creature is etched with patterns of a traditional weapon that the Polynesian warriors wielded makes for a significant sign.

The Plumeria attached to the shark′s head gives it a sweet touch and can be worn by many female tattoo enthusiasts.

This simple design of a Hawaiian Shark represents the idea of a traditional shark tattoo from the Polynesian Islands where the powerful sea animal is said to protect the families and is a symbol of the sea Gods. The turtle motif is an extra added symbol that holds its own deep meaning and makes for an important role in the Polynesian tattoo culture.

It is ideal for a first-timer and does not need much effort, but brings a beautiful result with deep meanings for a tattoo.

Sailors acquire hammerhead shark tattoos as a kind of amulet or good fortune charm. This theory holds that the hammerhead shark will keep other harmful sharks and creatures at bay while you′re out on the ocean.

They also hold special symbolism in various cultures including the Polynesian or Hawaiian culture.

In this piece, the artist creates a simple hammerhead shark with spearhead patterns in the middle and other traditional Polynesian patterns that we commonly find in Polynesian tattoos.

If you like simple tattoos, then we′d suggest you opt for this simple body art seeing as it is not only elegantly beautiful but also deeply meaningful.

Here, the artist made an intricate design by incorporating a shark, a dolphin, a manta ray, and a turtle.

This intricate blend of all the famous Polynesia sea animals made for a stunning and ostentatious leg tattoo that is sure to appeal to many tattoo enthusiasts. Such intricate designs are rather hard to replicate however, they look absolutely stunning when done.

The artist used blackwork style to create the tattoo which adds to the edginess of the tattoo.

Such symbolic elements of a tattoo are common for the Polynesian tattoo culture and their other meanings hold as much life as their visual appeal.

Often Polynesian symbols are made of Shark Teeth, they incorporate the Shark Teeth pattern or a stylised version of the pattern in creating various tattoo designs including the Shark itself.

Like in this piece, the body of the shark is designed with styles versions of shark teeth patterns that might otherwise look like simple pointed designs to the world, but to the Polynesian people, these shark teeth hold meaningful symbolic ideas.

The beautiful swirls and twists that create such a stunning piece of art are rarely found in any other art form or tattoo. Hence, Polynesian tattoos are a massive hit around the world.

Polynesian tattoos hold their own reputation as a stunning art form in the Tattoo Community and they will continue to thrive seeing as tattoos have become an important part of the fashion and body modification industry. You can take your pick to further enhance your canvas or get your first tattoo from our small list.