101 Best Harley Quinn Tattoo Ideas You Have To See To Believe! 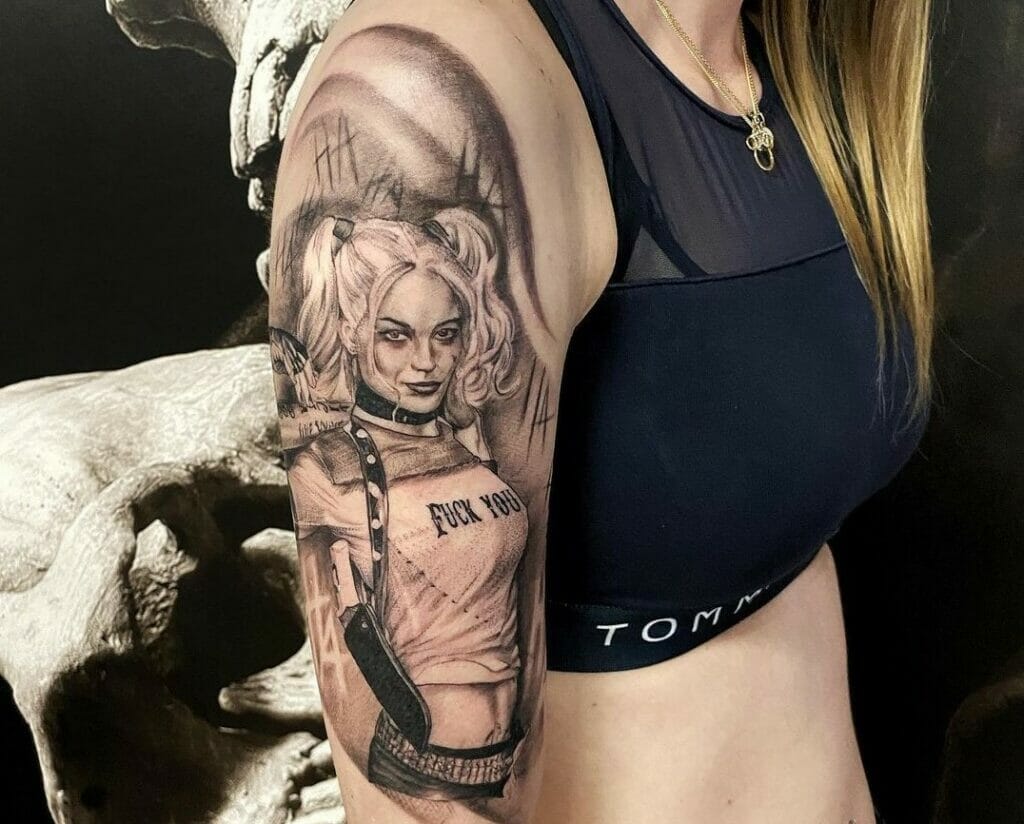 If you are a DC fan and absolutely adore Harley Quinn, then you are looking in the right place. This list of Harley Quinn tattoos is a must-read for you.

Harley Quinn is one fictional character you have probably heard of even if you do not follow any superhero stuff.

She is the unlikeliest antihero or super-villain you will ever come across on the silver screen or comic book pages. Played by a dynamic Margot Robbie, it is really very difficult to put an adjective or two to describe Harley Quinn’s personality, much like her iconic ex, the Joker.

Quinn’s entrance into the DC multiverse was as electrifying and inexplicable as her costume or eccentric activities on the screen. Critics simply fail to come up with a reason how Harley jumped from the 2016 flop movie ‘Suicide Squad’ into the hearts of millions of fans worldwide. Harley became one of the most popular stand-out characters of the DC universe who raging popularity forced the writers of DC to make more films with her in the ensembling cast. Very rarely have women characters in the male-dominated superhero film industry have had such an influence with millions of cosplayers donning Quinn’s jacket and pink and blue wigs and posing as her. The 2016 movie ‘Suicide Squad’ was such a disaster that it might have decided to drop further instalments surrounding this unlikely group of anti-heroes if not for the one quirky clown – and surprisingly not the Joker – who made it into two more films and an animated series. James Gunn revamped the ‘Suicide Squad’ with his own brilliant retake titled ‘The Suicide Squad’ (2021) that became the sleeper hit of the year. Just the previous year, fans were excited to witness Harley Quinn’s standalone film ‘Birds of Prey: And the Fantabulous Emancipation of One Harley Quinn’, which drove in the point that a movie with only women superhero characters at the helm can also work.

All in all, if you are searching for bad-ass lady tattoos then look no further than this specially curated list of the eccentric but fiercely independent female clown, Harleen Quinzel a.k.a Harley Quinn.

The 2016 ‘Suicide Squad’ was an unimitable disaster in more than one way. But it also gave us our beloved Harley played by a delicious Margot Robbie and we simply could not get enough of her. Get this super cool Harley’s image, inspired by ‘Suicide Squad’, inked on your shoulder to wow your buddies.

Quinn’s eccentricities know no bounds and this skeleton tattoo, dressed in Harley’s iconic comic book clown attire, holding a big ass hammer, is the perfect tribute to the role played by Margot Robbie. The brilliant use of black and white ink also makes it a piece of art that prove to be irresistible for tattoo enthusiasts.

This superb grayscale imagery of Harley’s face can be an interesting addition to your arsenal of body art if you are a DC fanatic. But we will advise that only experienced tattoo enthusiasts should go for this Harley tattoo sleeve for it might prove to be a bit too much for first-timers.

Much before ‘Suicide Squad’ happened that made Margot Robbie the unquestionable face of Harley, she was quite a popular character in the comic universe of DC. Granted that if not for Margot and James Gunn, the idiosyncratic ex-lover of Joker might not have become a household name. But hardcore DC enthusiasts will go for this ink design to prove their loyalty to the comics first.

The Harley Quinn And Queen Of Hearts Tattoo

It is an open secret that Harley is the queen of our hearts and this awesome tattoo capitalises on that to deliver a stunning design of Harley Quinn’s imagery that will be a must-have for fans. The Queen of Hearts cards made to look like her is especially a wise move.

We see a number of tattoos on Harley Quinn’s body in all the movies she has featured till now, with some of the most famous being the sassy ‘Property of No One’ quote, the rotten tattoo, and the diamond tattoo. While most of the tattoos on this list will require a good budget and a lot of time, as well as money, owing to their large size, use of several ink colours, and complex designs, this minimal design of Harley’s diamond sign will be a welcome relief for first-timers as it demands none of the aforementioned things.

‘Suicide Squad’ showed the beginning of a toxic relationship between the Joker and his muse that led to many disasters throughout. In ‘Birds Of Prey’, directed by James Gunn, the director showed how Harlene finally decided to forget the Joker after being dumped by him for the umpteenth time, even inking the sassy ‘Property of No One’ quote to mark the end of her relationship. But Joker and Harley’s relationship transcends everything and this tattoo is a symbol of their crazy love that has become a popular choice for millions.

The 2020 film ‘Birds of Prey’ was a milestone in the superhero film industry for it was helmed by only fictional women characters, who were delusional, outcasts, but fiercely independent. This film took Margot’s character to unmatchable heights and this tattoo design pays homage to that.

Harlene is an eccentric character with her colourful jacket, neon wigs, and all that clown make-up on the face and so is her idiosyncratic acts throughout the films. This pistol tattoo screams quintessential Harlene with the message popping out of the barrel instead of a bullet and these tattoos can be the apt choice for fans of the character.

The diamond tattoo is a nod to Quinn’s origin as a harlequin clown. This is rooted in the Italian theatrical tradition of commedia dell’arte that portrays harlequins as the King’s brightest servants who are fun, quirky, and occasionally chasing their love interests. These particular tattoos act as a tribute to Quinn’s theatrical roots and is an awesome choice for worldwide fans.

All in all, these Harley tattoos are unquestionably fun and ladened with some heavy symbolism like bidding farewell to a toxic relationship, owning your mental illness, or flipping patriarchy off. But be decided on which tattoos you want before actually rushing into a parlour nearby. Even Margot despised some of Harley Quinn’s tattoos shown in the films such as ‘Suicide Squad’ and ‘Birds Of Prey’. You might have noticed in the 2021 film of James Gunn that Robbie did not have some of the tattoos that were imprinted on Harley’s face in her first two outings. When asked by fans, Gunn simply decided just to remove them as “Margot didn’t like” them in the first place. Happy inking!

What does a Harley Quinn tattoo mean?

What are the different Harley Quinn tattoo designs?

Where is the best place to get a Harley Quinn tattoo?

The best place to get a Harley Quinn tattoo is on the upper back, shoulders, or arms. This allows for the tattoo to be easily visible and also keeps it from being obscured by clothing.

How much does a Harley Quinn tattoo cost?

The cost of a Harley Quinn tattoo depends on the size, complexity, and placement of the tattoo. Smaller, simpler tattoos may cost around $50, while larger, more detailed tattoos can cost several hundred dollars.