10 Best Hanging Bat Tattoo Ideas That Will Blow Your Mind! 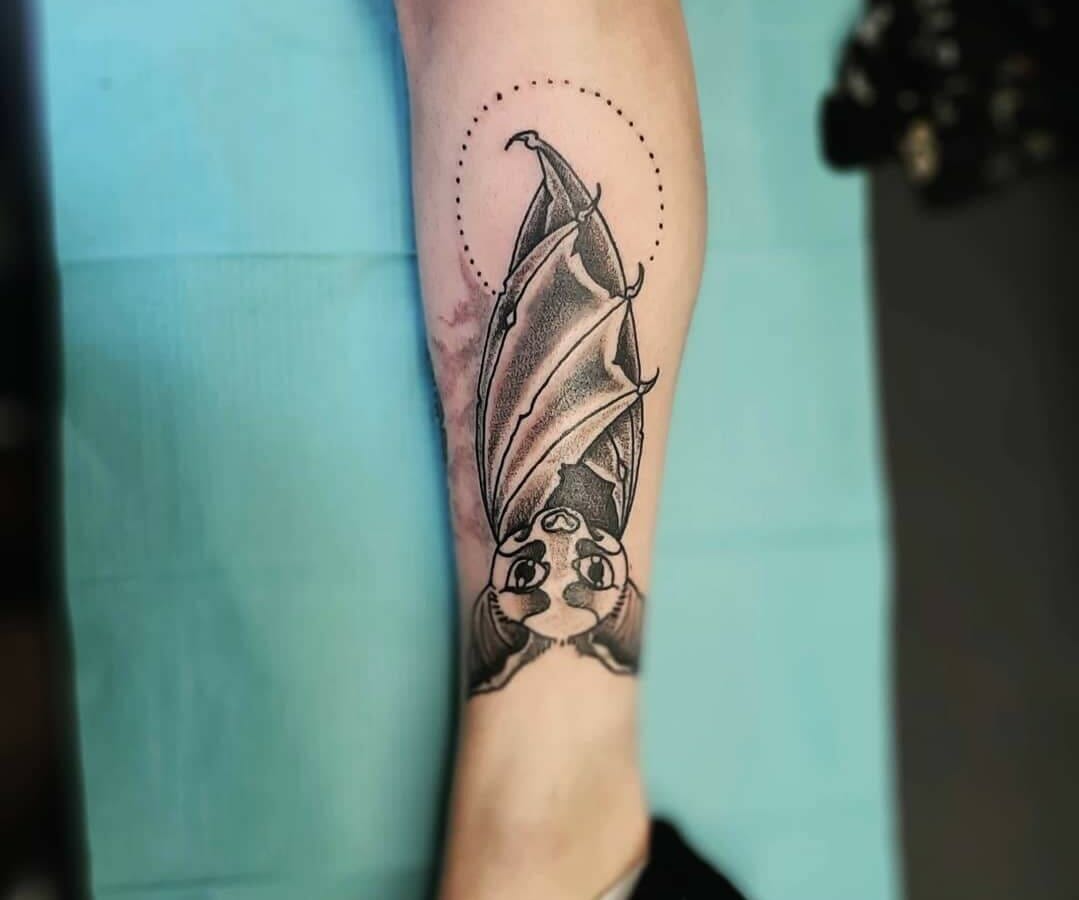 In mood for something dark and mysterious? Have your pick of these amazing bat tattoo designs to stand out in the crowd.

Bats are often referred to as ‘guardians of the night’ and they are often exploited as a trope in popular culture.

The idiosyncratic nature of these mammals makes them a favourite of film directors and authors when it comes to the exploration of the uncanny on the screen or in a novel. Bats stay away from other creatures, they dwell in dark caves, they sleep hanging from a tree upside down, all these traits have led us to define them as non-normative.

Here we bring to you ten amazing hanging bat tattoo ideas each of which is unique in its own way. From pop icons like Count Dracula and Batman to literary settings like the Denmark of Shakespeare’s Macbeth, has invoked the bat imagery for myriad purposes. One can get a bat tattoo done to celebrate the uniqueness in each one of us.

This is a colourful bat tattoo design which features the mammal hanging upside down from a branch of flowers in dazzling tangerine.

Although the placement of the design demands a more or less flat surface area with as little contours as possible to ensure minimum distortion of the nuances within the body art, yet one can get it inked anywhere she likes.

This is a bat tattoo design featuring a cute little baby bat caught in flight. In case you did not know, bats are the only mammal that can fly which makes them so unique. The tattoo is an example of a fine line body art drawn in black ink. These types of outline designs owing to their minimalism offer one an enormous scope for experimentation. He or she can choose to fill it with details like fine strokes or patterns or simply put in colours.

A liberatingly original piece of art, this tattoo represents a hanging bat ensconced in luxurious foliage speckled with myriad colours.

The tattoo through its clever manipulation of the colour coordination between black, orange and lavender invokes an electrifying attraction. Those bewitching eyes of the mammal calls for a special mention.

This is a cute Egyptian fruit bat hanging from a tree branch and feasting on pomegranates. Since a bat is perceived as a symbol of death and rebirth, bat tattoos mostly focus on the wings because wings metaphorically embody the possibility to cross boundaries. But this particular bat tattoo deviates from this trend by representing the creature for what it is.

Without engaging with the symbolic meaning the bat tattoo concerns itself with the immediate materiality which surrounds a life form and from which it sustains life. To ensure that the pomegranates function as a foil to the main design they are left un-coloured.

Bats are often regarded as the ‘guardian of the night’ and here we bring out to a flying bat tattoo where the mammal reigns a beautiful night sky divested with clouds and a full moon, like a true king!

The panoramic framework of the illustration demands a larger surface area with minimum undulations to prevent the details from being rendered reductive. Most tattoos within the whole artwork are outlines filled in with subtle black and white shadings, the clouds are drawn in a Post-Impressionist style, the night sky is filled completely with black ink and the stars are picked out with white so as to make them pop up more beautifully.

A mesmerizing bat tattoo displaying a close up of a bat with wings spread out on either side and vibrant flowers oozing watercolour effects.

The focus is primarily on the eyes of the bat and it is interesting how the artist has chosen to draw the pupils with the same colour as used in drawing the centers of the flowers. This adds dimension to the design transforming it into a realistic artwork pulsating with life.

The design features a colourful hanging bat surrounded by flowers. An otherwise simple design is rendered beautiful by intelligent utilization of colours and details. There is a subtle tribal touch to the entire artwork.

The big yellow eyes of the bat and its exposed fangs suggest that here the artist has intended to focus on the so-called ‘evil’ side of the creature. Many cultures have labelled bats as forces of evil because they reign the night sky and is drawn to darkness.

A simple yet searing hanging bat tattoo design which besides being compact is also economical. No colours have been used which gives it an almost pencil-sketched look but one can play a little bold by thickening the outlines and filling in more details.

It is beautiful how the entire artwork evolves around the central vignette which sort of functions as a metaphor for the dark energy which bats in popular culture are shown exuding. The size of the tattoo allows you to get it inked anywhere on your body, yes even on your wrist!

A quirky tattoo featuring a black and white hanging bat. The feet of the creature is shown being clawed around roots instead of a branch which perhaps implies that bats are metaphors for the universal human instinct to hold on to that which is transitional and ephemeral.

The brilliant colour coordination between black and grey has taken the design to a different dimension altogether.

This is a bright design full of life and vigour! Most suitable as a chest piece it can also be worn as a sleeve tattoo or a back tattoo.

The design features a hanging bat soaked in a riot of colours ranging from green to yellow to tangerine to fuchsias. The design is essentially inspired by tribal aesthetics and incorporates fusion art forms.

Apart from the designs included in this list, you can also check out further hanging bat tattoo ideas such as: