10 Best Hand Skeleton Tattoo Ideas You Have To See To Believe! 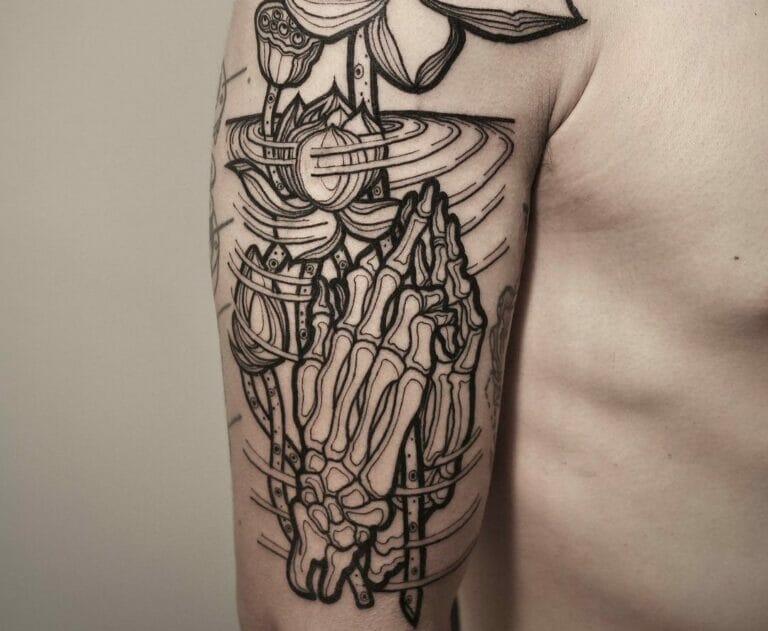 Are you fascinated with how a skeleton hand turns up in a tattoo? We have assembled a wide range of skeleton hand tattoos that will urge you to get inked ASAP!

A hand skeleton tattoo is as if a go-to for the lovers of shady tattoo designs.

Many people associate a skeleton hand tattoo meaning with death, morbidity, and ghastliness which is entirely justified owing to the age-old beliefs. But they can also mean impermanence, regeneration, and fearlessness based on how they are styled.

Skeleton hand is a staple for people subscribing to the darker side of body art. The subject is versatile, easy to experiment and provides myriads of opening for personal taste. Placing them on your hand would mean a bold separation from a crowd with an unapologetic persona. However, there are a number of factors that come up while talking about a skeleton hand tattoo and a prime one is that of placement. Hand tattoos do hurt the most due to the lack of flesh and fat in that region of the body and can be a bad idea for people on the skinnier side. But if you are particularly feeling brave, keep scrolling to find some impeccable skeleton hand tattoo designs and see what they mean!

We say realistic for a reason. This skeleton hand tattoo gives us major anatomy class vibes with its corroded bones and flawless shading on the whole structure. There is a glistening effect that makes the skeleton hand look as if it were protruding out from underneath the skin. The black background further sheds light on the design making it an absolute eye-catcher!

This game-changer of an arm skeleton tattoo is apt for you if you prefer tattooing your entire arm. The skull adorned with a crown further increases the gravity of the design making it a lethal piece of body art made to complement your spirit. Black and grey mix channels attention towards the intricacies of the skull bringing out the effects of after-life. Although you might want to project all your bravery when the needle touches your fingers for it will hurt.

There is no compulsion to ink skeleton hands only in your hands (phew!). Instead, draw inspiration from this amazing, neat outline of a design that attacks your stomach area. It is more feasible for those who want to get tattooed but hesitate given the pain limit. The slender skeleton hands seem like levitating the eye with the fingers with their occult symbolism. The eye as well looks deep into something, as if dreading the afterlife. The design could also stand as a comic symbol that represents that the skeleton is looking for its eye to reassemble itself after death. Whatever be the design of the skeleton hand tattoos, there are always multiple meanings and perspectives associated with them. You can also scoot this tattoo to your chest for a better chance of exposure.

Many opt for the spooky skull tattoo to complement their darker persona and your hand is the perfect area to best exhibit this side of you. The skull seems to have appeared out of the smoke that has left trails on the wrist. The black and grey work is the prime focus of this awesome skull tattoo with the finger work to fill up the negative space. This badass tattoo design brings out your mysterious personality that likes to leave people guessing.

Skeleton Hand Tattoo With A Snake

Yes, it’s doubly dangerous now that a skeleton hand is coupled with a venomous serpent that is tugging at the heart. There is something malicious in the gesture of the snake that threatens the skeleton. The design could be interpreted as an interesting take on the part of the artist who represents the human heart as the forbidden fruit and the serpent lures the post-mortal Eve to test it. Or it is the desperate attempts of the dead skeleton to regain life which the serpent protests. Whatever be your interpretation, the design is an absolute killer bound to appeal to chest tattoo lovers.

As we said, the same motif can be twisted and shown in a different light. In this representation, the snake is laced around the skeleton hand like a piece of beautification. The pitch-black snake with flower patterns and the deeply shaded skeleton hand produces a striking contrast that could make a good example if you decide on adding these kinds of tattoos on your skin.

The artist here exhibits their fun, playful side with this minimal yet awesome skeleton hand tattoo. The idea is simple without much of the hassling details typical in a tattoo. The conjoined pinky finger could be interpreted as a symbol of the promise of the nuisance that both the dead and the living are taking part in. Place this witchy promise on your arm as a sign of your non-conformance into mundanity and watch the world applaud in awe.

In the dark interiors of a coffin, the hand of death remains clasped sealing death and its set of rules. Or it could be seen as the cremation of death’s hands only as a sign of rest to death. The blackish coffin and its contents seem to have reached outside and touched the flowers. Get this tattoo inked on your limbs to show off your immaculate taste in body art with pride.

While “cool” might represent different things for you, these designs are worthy to draw inspiration from. This colourful skeleton hand tattoo is a remnant of the Dia de los Muertos festival so widely celebrated in Mexico. The vibrant flowers and the sign are so aptly coloured with blue and orange ink that is bound to make this piece of art stand out no matter where you place it on your body.

Here, the artist presents the concept of mortality in plain sight. The fact that a skeleton hand holds a burning cigarette in its hands may also point towards the possible cause of death. On the other hand, it might also hint at the habits that stick even after death. Notice the minutely detailed smoke fumes that add to the beauty of this bold design. This tattoo is certainly here to rule and we are all for it!

What can be more unsettling than a skeleton hand reaching out but trapped in a bell jar? This anatomy lab-inspired design tattooed with amazing shading techniques will put your search to a halt. The twigs associated with the hand may have been put there for embellishments or for a forensics-related token. What is more interesting is that this skeleton hand drawing looks like a pencil sketch, all hail shading artists, and can be a popular choice among both men and women. You can also experiment with more such related motifs to diversify the encapsulated skeleton hand tattoos.

Fans of Rock n roll, here is your cue to fix appointments with artists and own a hip tattoo yourselves! This seemingly simple tattoo with bold outline and minor shading form the sign that we all are well acquainted with. Be it Zeppelin or Floyd, this tattoo is an example that music binds us, even and especially afterlife. You can also use coloured ink according to your taste and the symbolism of such designs.

Once a lover of tambourine, always a lover of tambourine. With no definite outlines, this small tattoo design adds an ethereal feel to its aesthetics maintaining its compact structure. These tattoo designs might represent something more than that of a cool style. First, it could hark back to the baseline of mortality- unity of being despite racial differences. Next, music is an amazing tool to amalgamate and present this symbolism even more powerfully. If you are a person with deep empathy for humankind, opt for these tattoos to portray layers of interesting symbols.

An interesting way to develop off-beat skeleton hand tattoos is to pair the creatures of the underworld with the cosmic giants. This could connect the circle of existence on Earth with that of the universe at large. The skeleton hand here almost touches the moon thwarting the differences of space-time and other such mortal barriers. This cool style can easily be associated with occult beliefs that have often established a connection between the paranormal and celestial beings. Notice the spirals radiating from the moon that are without any outline and detailed to the brim. If you are in search of a tattoo design that bridges science and cultural beliefs, draw ideas from this one and get set inking!

It is often believed that life and death are perpetually at war with each other to establish an upper hand in the face of human existence. This tattoo could represent such a connotation with life and death competing with each other. Life holds the bright Sun while death is given the dark Moon, which could also stand as a symbol of good vs evil in the greater scheme of things. Nevertheless, the tattoo artist here picks the side of good as the black ink of the moon bleeds and would be diminished in a matter of hours but the style in which the skeleton hand holds it upright shows the strife that it designs for mortality. This amazing piece of art with a realistic style of fashioning increases the score on our aesthetic parameter! We would advise you to place these showy designs on the parts of your body that receive maximum exposure.

Skeleton Hand Tattoo With A Rose

Skeleton hands and skulls have often been seen among a bunch of flowers, particularly roses. The motto is to present a dichotomy of the beautiful and the feared. The motif of a skeleton hand holding a red rose could be a sort of lamentation for the romantic love that has ceased to exist in life. Mostly these tattoos are in the memory of the end of a relationship or a death of a loved one who the wearer wishes to commemorate. The tattoo artist here is influenced by the traditional style of skeleton-rose tattoo designs that are a staple for tattoo enthusiasts. The bright red ink of the rose makes the design stand out and even more powerful by stressing further on the symbol. Brittle bones hold the flower upright and it is completely up to the observer what they see- death corrupting a full-bloomed life or life adorning death. You can even experiment with a dead rose to represent the concept even better.

Card tattoo designs also have used skulls as a primary motif to underline a dark design. Here, the essence is kept intact but the skull is replaced with a skeleton hand holding a rose in the card having the highest position in the hierarchy. The black ink of the rose and the overall outlining make it difficult to determine whether this style attempts to represent something positive or something ghastly. The meanings are multiple and your perspective only can answer for the symbol of your tattoo.

Skeleton hands are an immensely popular tattoo trope for the liberty that they offer in experimentation and styling. These can represent pure good or evil depending on how you style them. Many tattoo enthusiasts go all in for a skeleton tattoo on their hands and come out with a jaw-dropping design enough to set them differently forever. Having said that, the following are some suggestions on skeleton hand designs to ease you in your ink journey: