101 Best Hand Of Fatima Tattoo Ideas That Will Blow Your Mind! 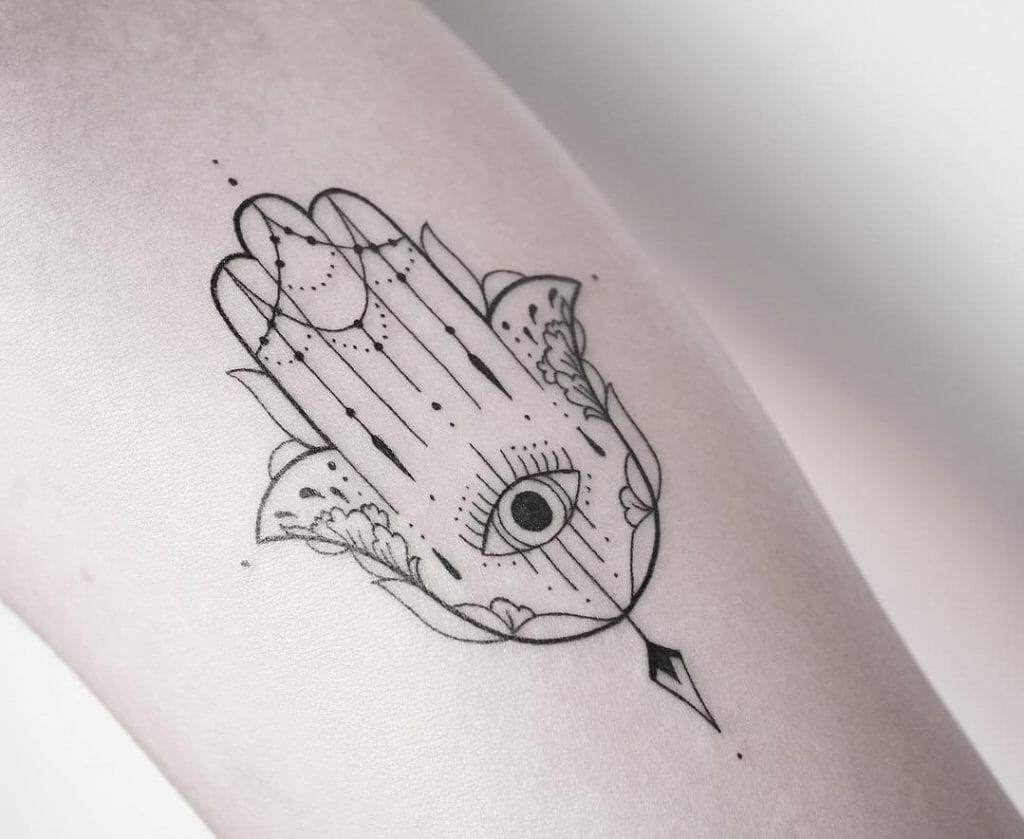 Looking to imprint the Hand of God permanently on you? Well, we′ve the coolest Fatima Hand Tattoo Designs collected for you to choose from and fawn over.

The Hand of Fatima is also famously and rather commonly known as the Hamsa Symbol or the Hamsa Tattoo.

Other than that it is also popularly known with names such as Mary, Miriam and Tanit. While not everyone might know Hamsa Symbols or a Hamsa Hand Symbol by name, many recognize it when they see it.

A Hamsa tattoo is easily identified because it is fashioned like a palm with a single eye in the centre. Because it′s asymmetrical hand, it looks to have two symmetrical thumbs on each side. There is, however, another sort of Hamsa tattoo that resembles a natural hand. The symmetrical one, on the other hand, is far more popular among tattoo enthusiasts.

Tattoo enthusiasts around the world often find different designs of the Hamsa Hand to get tattooed and due to its immense popularity as a symbol that brings good fortune and prevents bad luck.

We have curated a list of Hamsa Hand Tattoos with a variety of tattoo designs that you just cannot miss out on. Its symbolism, design and its popularity among peers make it an ideal choice of tattoo to get tattooed.

The Hand Of Fatima Tattoo With Floral Designs

A hamsa tattoo design is very mesmerizing and hypnotic in nature, especially with the eye in the middle of the hamsa hand′s palm. Other than its deeper meaning, of course.

Hamsa Tattoos are customizable. You can add your own version of designs, may it be ornamental or floral. Thus, you can use different flowers like daisies and peonies and poppies to enhance the tattoo design of your hamsa tattoo. Flowers have their own meanings hence enhancing the hamsa hand′s meaning.

Small, dainty tattoos are largely popular among tattoo aficionados, specifically the female population however, there are small hamsa tattoo ideas that are a favourite among the male population.

Anyhow, small or not, they provide spiritual protection in their religious context. The belief system associated with the hamsa hand tells us that it has different meanings and can be worn in different ways or positions.

However, in this design, the tattoo artist used the Fineline method to design a very small hamsa hand, adding to the various hamsa tattoo designs for people to choose from. The palm of the hamsa has been designed with the evil eye and a lotus while the fingers are decorated with dots, giving the hamsa tattoo a sophisticated look.

If you are someone who prefers dainty, minimalistic and basic tattoos then we assure you that you′ll not be disappointed with this.

Minimal Tattoos are never going out of style, rather they are getting more and more trendy as time passes. People are seeking to minimalize everything and anything around so it is only obvious that the minimalist and modern designs have found the Tattoo Community.

The artist creates a beautiful design with ornamental extras that gives the hamsa hand a pleasing and decorative look. It has a feminine appearance and is ideal for wrist or forearm placement. The ornamental design on the hamsa tattoo is a modern design that is otherwise lacking in traditional or tribal hamsa tattoo ideas.

Since hamsa tattoos are customizable, this sort of modernistic design is favoured among tattoo peers and now you can have one too.

Colourful tattoo designs are some of the most popular choices and why not? After all, they are so vibrant and chic, they easily grab attention from onlookers.

So, of course, a hamsa tattoo must be done with lots of colours and it′s especially aesthetically pleasing when done in Watercolours.

Here, the artist managed to create gorgeous body art of the hamsa symbol that is sure to bag the wearer lots of compliments. Using bold colors, the artist splattered them in different portions of the Fatima sign. Complete in its traditional design including the five fingers, of which there are two thumbs. The hamsa meaning was derived from these fingers, referred to as in Arabic and Hebrew. Other than that, the fingers symbolize the five senses.

The sign is worn by both men and women and despite its different lores that originate from different cultures, the symbolism remains the same for the wearer. Tattooing a hamsa symbolizes good fortune and gets rid of the evil eye.

Such symbols are always popularly chosen for tattooing and you can become a part of the trend too.

Realistic tattoos are a major hit in the Tattoo Community especially when it comes to such symbols that bring good luck and ward off negativity because they′re almost hypnotic in nature with their eccentric designs and their ancient, religious, god-associated meanings.

So when a tattoo is designed to look realistic, it tends to further enhance its meaning and people find the aura almost tangible. Hence, their popularity.

Likewise, this Hamsa tattoo was created by the artist to give off a realistic and hypnotic look that easily catches attention. Here, other than the traditional design of the hamsa hand and the evil eye, the artist also incorporated a beautiful and intricate Lotus flower and a Mandala. Each of these designs has its own meaning; a lotus flower symbolizes purity while a Mandala is a symbol of balance.

Together, they make for a powerful and gorgeous tattoo design and if you are someone who enjoys an elaborate, tasteful looking design then this tattoo is just for you.

Hamsa Tattoo Designs are usually created with black ink or other colourful inks that give the hamsa hand symbol a gorgeous and aesthetic look. However, hamsa tattoos with white ink have their own share of popularity among tattoo aficionados.

Those who enjoy quirkily, unconventional designs often get tattoos inked with the colour white.

This tasteful piece is no different. Here, the artist made a small hamsa tattoo with white tattoo ink. The tattoo art, while unconventionally unique, is also sweet, simple and chic. But, what makes it prettier is the blue evil eye symbol in the middle, enhancing the hamsa tattoo′s beauty with its contrasting look. True to it′s stories, the symbol is placed on the upper wrist in order to bring good luck and ward off the evil eye.

An upside-down hamsa tattoo is said to hold a different meaning, unlike the upright hamsa tattoo. Since hamsa tattoos can be worn in different positions, they are said to have a variety of meanings, depending on the design and the position.

So, if you are more intrigued by the upside-down version of the symbol then we′d you to get this particular design that has floral intricacies in the palm and yet offers a simplistic and neat look.

The Hand Of Fatima Geometric Tattoo

Geometric tattoos are popular because they evoke feelings of harmony, symmetry, and even mystique. Almost any artwork may contain a geometric motif, making your selected item more fascinating.

In this stunning geometric design of a hamsa tattoo, the artist created two sides of the hamsa symbol. While one side was created to look like a real human hand, the other half has geometric patterns like circles, half circles and straight lines. Together it makes for a stunning, enigmatic and nuanced hamsa tattoo.

This evil eye tattoo has much variety, however, the symbolism and its meanings remain the same. It continues to symbolize the hand of God.

Hamsa Tattoo With The Tree Of Life

This stunning piece of artwork is quite possibly the prettiest of all the hamsa tattoos we have listed so far. Done with the Fineline method, the tattoo presents a unique and unconventional design that is sure to tickle your fancy.

Even the forearm placement is ideal, enhancing its vertical position and highlighting the contours.

Despite it being a simple design, it is so sophisticated that it′s hard to look away from it. The main styles of hamsa tattoos lie in their thumbs and the eye. However, the artist skipped the eye in this design. Instead, they etched the Tree of Life, another beautiful symbol, whose meaning is popular among tattoo aficionados.

Together, the tattoo makes for a beautiful artwork that you just cannot miss out on. If you want to get a Hamsa Tattoo but want to make it more intriguing and unconventional, then this is the design you should opt for.

Hamsa Tattoo With An Unalome Finishing

Finishing this small list of Hamsa Tattoos, we have one last piece, just as stunning as the others in this list.

Here, the artist incorporated a Unalome design with the Hamsa tattoo. However, instead of an evil eye in the midst of the palm, the artist etched a minimalist version of a floral pattern. Together, all these elements created a tasteful and visually appealing piece and at the same time, the five pillars and the unalome′s hold their meanings intact for people to acknowledge and learn about.

With that our collection of some of the most stunning Hamsa Tattoos has come to an end. Hamsa Tattoos continue to rise in popularity and these unique designs and other motifs that artists incorporate and customize will further enhance it′s popularity. So, this is your sign to get yourself a Hand of Fatima Tattoo.

What is the meaning of a hand of fatima tattoo?

A hand of fatima tattoo is a popular design that is often chosen for its meaning and symbolism. The hand of fatima is an ancient symbol that represents protection, strength, and blessings. It is also said to represent fertility and motherhood. Many people choose this tattoo design because it can be very personal and meaningful.

How prevalent are hand of fatima tattoos?

Hand of fatima tattoos are becoming increasingly popular, especially among young people. This tattoo design is often seen as a trendy and stylish choice that can be very meaningful.

How long do hand of fatima tattoos take to heal?

Hand of fatima tattoos usually take about 4-6 weeks to heal. However, this can vary depending on the size and complexity of the design.

What are some popular designs for hand of fatima tattoos?

There are many popular designs for hand of fatima tattoos. Some common designs include the traditional hand of fatima symbol, as well as more modern and abstract designs.

How much do hand of fatima tattoos cost?

The cost of hand of fatima tattoos can vary depending on the size, complexity, and location of the tattoo. Generally, smaller and simpler designs will cost less than larger and more detailed designs.

Are hand of fatima tattoos painful to get?

Hand of fatima tattoos can be painful to get, depending on the location and size of the tattoo. However, many people report that the pain is manageable and worth it for the final results.