10 Best Hamsa Tattoo Ideas You Have To See To Believe! 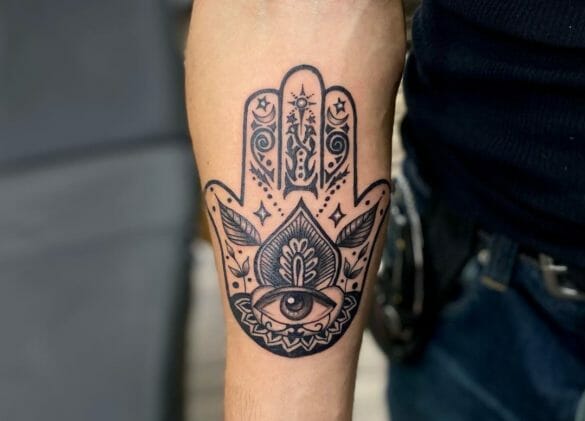 Do you want your tattoo to be a symbol of positivity and usher in all the good things in life? A Hamsa tattoo will serve you just right!

The Hamsa hand is an ancient symbol of protection from evil that steers in prosperity, good luck, good health, and abundance.

This symbol is popular among many religions as they consider it to be the hand of God, although it existed long before the origin of any of the religions. Even though the Hamsa is all about positivity, it is very important to know all about its symbolic connotations before you decide on a Hamsa tattoo.

Hamsa ranks high in symbolism in almost all religions known to mankind. Religious groups have adopted the hand with two symmetrical thumbs and the eye to ward off evil. The Hamsa hand meaning is derived from the five fingers of the hand, although it is known differently in different religious beliefs. In Islam, it is considered as the Hand of Fatima, the daughter of Prophet Muhammad; in Judaism, it is the Hand of Miriam; in Christianity, it is the Hand of Mary; and in Hinduism and Buddhism, the Hamsa hand represents spiritual awakening and chakras to unleash energy. Thus, it is crucial for the wearer of a Hamsa tattoo to be regardful towards all these religious groups to avoid any disrespect or humiliation.

Hamsa tattoos are often accompanied by a blue eye which is a symbolism for waving off the evil eye or Nazar, and it is often colloquially known as the evil eye itself. Another interpretation of this eye refers back to the eye of Horus that represents protection, well-being, and prosperity in Egyptian culture. Therefore, Hamsa makes a popular tattoo trope for its symbolism and rich cultural history. A Hamsa tattoo will only mean positivity either inked upright or down. Keep scrolling to find the Hamsa symbol portrayed in different tattoo designs and choose your pick!

This hyper realistic Hamsa tattoo design depicts the Hamsa hand along with a bluish pink lotus. The lotus is an unconventional flower that emerges from mud with its long stems and numerous petals and is often attached with spiritual connotations. In Buddhism, the lotus is an emblem for enlightenment and spiritual regeneration for it strives to grow out and transcend above its filthy origins. The blue in the middle amidst the black and grey pattern provides for both contrast and to underline the circumstances in which a lotus grows.

If you’d like a much simpler and modern representation of the Hamsa hand tattoo, this cute little thing will be your go-to. Without any crowding in the tattoo design, the Hamsa hand is kept simple with its plain black outline. The inner area is filled with mini, blue lotuses that replace the blue of the evil eye, maintaining the traditional Hamsa hand. You can place this dainty tattoo on your wrist or above your elbow for better display.

Speaking of small Hamsa tattoo designs, this Hamsa hand tattoo shows how tattoo designs need not be loud to exhibit intricacies. The artist here has used the blue outline and white ink to fill up the interior. The all-seeing eye is substituted for a tiny four-edged black symbol that could have been used for beautification or other cultural meaning.

This is another example of how you can create your own mini Hamsa hand tattoo. Discard fancy details for plain dot work and include the evil eye for a pop of colour to draw attention without going over the top.

The Hamsa hand allows ample room for experimentation with patterns and symbols. For instance, here, the artist focuses on a mandala design surrounding the evil eye and extends this motif near the fingers and even outside the hand of Miriam. The delicate curves along with the beads at the periphery make the Hamsa design look aesthetically pleasing.

If fractals allure you into their infinite maze, this Hamsa hand tattoo design is definitely for you to wear. The idea is to fit a geometric mosaic of fractals into this hand of Hamsa tattoo for a methodic and neo-traditional Hamsa design. It also can be interpreted as such that the hand of God envelops the infinite motif establishing control over the universe. We would suggest you keep this tattoo art devoid of colours to focus more on the intricacies.

Here is another geometric Hamsa tattoo without the typical, definite palm. Instead, the palm is replaced by an array of circles and tangents that weave a hypnotic design to represent spiritual traces in a geometric Hamsa tattoo. Men who would prefer to clear away from the idea of Mehendi arrangements can easily opt for these enigmatic Hamsa designs. You can have these tattoos inked anywhere of your body but the chest and upper back would do better justice to their art.

The hyper-realistic eye in this design is unmissable. The reference is made to the Eye of Horus with the quintessential symbol in the center. The eye is more purple than blue, yet serves the same function. The realistic eye might come up as a bit weird to many people for it is so uncommon but once you get a hang of it you will be able to craft it as you wish to.

The hand of God here features a stoic evil eye sitting on the palm and inside a lotus. The lack of any perturbance on the part of this amped-up eye is a significant symbol that turns away evil without itself or the wearer getting affected. Also, the fact that the eye is on the interior of the lotus also hints at the Buddhist belief of strengthening chakras and personal growth. You can wear these Hamsa tattoos on the nape of your neck as is shown in the image.

Hamsa Hand Tattoo Designs On The Back

The Hamsa symbol is capable of making exceptional tattoo designs for the back that will leave you awed with wonder. Offering great surface area for inking, the back is often seen to be reserved for symbols or designs that carry magnanimous meanings for the wearer. Given the Hamsa meaning, it is best to place Hamsa tattoo designs on the parts of the body that are fully or partially exposed. For instance, here the evil eye sits right at the base of the neck adorned with mandala art. The symbol at the top of the fingers is noteworthy and could explain the tattoo’s connection to Judaism where the people believe the fingers of Hamsa to represent the Five Books of Torah.

The artist here brings forth a truly modern Hamsa tattoo design with the inclusion of ombre colours into the picture. The blue center surrounding the eye is kept untouched but the rest of the hand is heavily experimented with and resembles a color palette for good. Placing the Hamsa here is beneficial for it would be able to be showcased whenever one wants it to.

The fact that the Hamsa hand can be modified to a grand picture or into a tiny piece talks enough about its versatility. Here, the tattoo idea is shrunk to a minuscule representation of the Hamsa symbol that makes no compromise in protection. The delicate geometry of this tattoo brings minimalism and the sacred symbol together to produce a unique manifestation of protection and good luck by warding off the evil eye.

If you want to increase the holiness of the Hamsa tattoo designs, opt for white ink as is shown in the picture. White means purity of being and has often been associated with divinity. This Hamsa hand is constructed with fine lines in white that strike a balance between overcrowding and banal. The evil eye is given more importance with its presence below the Hand of Fatima as well as the center. This tattoo almost makes it seem like an amulet that one would wear to reflect off the evil.

Here, the Hamsa hand tattoo makes room for the figure of Buddha in his meditative state. The enlightened replaces the evil eye and coupled with the Hamsa hand becomes a powerful symbol to drive away bad luck and other negativities. The strings of beads and the glistening touch of white with shading serve as apt ornamentation for this Hamsa hand tattoo.

Yin Yang is a prominent symbol that represents the acceptance of binaries in a stoic existence. Many people believe that the symbol means the coexistence of contradictory forces that depend on each other in the universe. If taken together with the Hamsa symbols, the YinYang can produce multiple meanings. Here, the Hamsa hand tattoo meaning can be interpreted as the protection against evil through good and the need for evil to balance the good. This is a paradox that exists in nature and has often awed thinkers time and time again. If you are someone who is utterly fascinated with human existence and the universe, you can get these Hamsa tattoos on your body as a symbol.

The artist here re-imagines the Hand of Fatima and portrays it in the human version it was made a myth. In this design, Hamsa is portrayed in 3D which is not a common intention that we see in Hamsa tattoos. The daughter of Prophet Muhammad stares outwards and means to provide protection of the wearer’s being. If you are a fan of quirky tattoos that differentiate you amidst the crowd, go ahead and ink this simple Hamsa tattoo on your arms.

The image shows an earthy, simple Hamsa tattoo that contains profound meanings in its periphery. Two elements are conjoined here- divinity and nature, to produce such an ethereal hand tattoo. The symbol could represent God offering protection via nature or the concept of the amulet in the greater context of nature. Such unconventional Hamsa designs represent individual persona and how someone views life.

We know by now what the blue colour represents in Hamsa tattoos. The hand tattoo here attempts to represent this blue all throughout the symmetry with its blue crystal and the enchanting aura of the Hand of Fatima. This hand tattoo will definitely beautify any part of your body with its enigmatic presentation. Or you can go on and experiment with colours like magenta along with blue to add dimensions to your Hamsa tattoos.

Call it the Hand of Fatima, Miriam, or God, the amulet makes a brilliant hand tattoo for all. Packed with positivity and a promise of protection, Hamsa tattoos are suited for both men and women with regard to this holy symbol. To ease your tattoo journey even more, here are some Hamsa tattoo ideas from our side: