10 Best Hammerhead Shark Tattoo Ideas You Have To See To Believe! 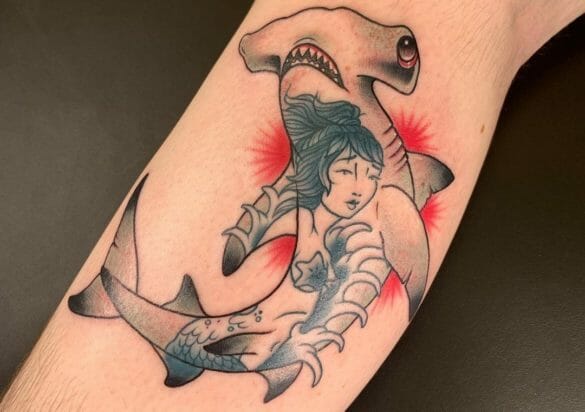 We know how it is to search for a dangerously cool shark tattoo and find cliches. That’s why we have some cool hammerhead shark tattoos to ease your trouble.

Hammerhead shark tattoos have become increasingly popular among marine enthusiasts who appreciate the ocean and all its undiscovered beauty and symbolize a go-getter and confident persona.

The hammerheads sharks are one of the giant species of the Shark clan and would be terrifying to look at no matter what. Contrary to what you may think, these sharks do not prey on humans and thereby making a popular tattoo subject over the world.

There is no singular hammerhead shark tattoo meaning. Rather, different cultures have interpreted this species differently. For instance, the Polynesian people regard these creatures as a divine emblem and thus the tattoo brings forth the connotations of being a protector. On the other hand, the Celts consider them as skillful hunters and thus the tattoo would mean a stealthy human. Generally, these sharks are worn as a talisman, mostly by fisherfolk and sailors as a symbol of protection against the lethal predators of the ocean. Now that you know a bit about their background, find below some of the coolest hammerhead shark tattoo designs trending on the internet and up your tattoo game!

If you want to do complete justice to this majestic being with all of its grandeur, go the old-school way to find a full-body portrayal of these creatures. Here, the artist takes plain black ink for outlining and intricate dot work to fill up the shark. The tattoo style is simple but uncompromising in its spirit.

This shark tattoo is similar in design but with a little something else. This one is free of much detailing and gets balanced out with the bright red coloured circle. It helps to fill up the negative space and gives a platform for the shark to bank on (no puns intended). You may ink both these tattoos on your forearm, upper arm for better display.

Hammerhead Shark Tattoo On Back

The best way to depict the hammerhead sharks is in their natural habitat. These sharks are mostly found in the warm waters near Hawaii, Columbia, and Costa Rica and divers have often had the opportunity to catch them in action. This shark tattoo design puts the hammerhead with other members of the shark family against the backdrop of the oceanic floor. The blue and red of the background further put better focus on the water creatures and produce a great new style to have etched on your back.

If you want to keep your tattoos clean, do away with the marine life and present the hammerhead in its singular form. This monochromatic, traditional shark tattoo captures the shark in its great form and adds charm with only shading techniques. You can always add other elements that suit your purpose and jazz up these tattoos.

This Polynesian hammerhead shark tattoo is a realistic portrayal of how the people near the coast view these sharks. This tattoo design makes a great show of culture and the folks’ acceptance of these creatures. To get a tribal tattoo, all you need is lines- bold tribal lines to outline the subject of your body art. Here, the artist goes a little further forward to add patterns of various shapes and kinds. These serve to beautify the designs even more. Usually, many people like a simple tribal shark tattoo, and in that case, you can make a similar impact without many details.

Take your tribal hammerhead to a next level by adding more elements. This shark tattoo seems so put together due to the pastel flowers and blue streaks which could be an amalgamation of the land and the sea. The touch of ombre in flowers and the blues add a dimension to the existing design and make it a fascinating portrayal of the tribal shark.

Don’t prefer too much ink going berserk on your skin? Fret not, we have solutions for that as well. This shark tattoo comes in the garb of solid black but still makes a statement style. It is cute, simple, and makes a great sign to be put on your wrist or ankle without getting into much of the complexities.

If you do not usually like solid inks, try to get a plainly outlined tattoo like this one. The look of this shark is almost real and minimal at the same time. We would suggest you go use colours whenever you choose a simple design for it to pop up on your skin. Place this tattoo anywhere on your body and see the aww-s coming your way.

Hammerhead Shark In A Rhombus

This quirky shark tattoo brings the sky and ocean together in a single frame. The sharks are seen to be floating amidst white clouds with planets above and the sea below. Dreamy much? The artist here has used shading but you can always go for colours and make your shark tattoos realistic enough to stand out. You can also take inspiration from this tattoo and make a great little portrayal of ocean life on your skin.

Hammerhead Shark Tattoos And Other Beautifications

This monochromatic shark tattoo comes along with seaweed, twigs, and other animals of the sea. Upon taking a close look you can see that the artist has taken great attempts to provide a real and detailed portrayal of the hammerhead with its gills and fine lines. Shading is primal to these styles and strives to add a new layer of intricacies in this seemingly simple work.

See why we say choose colours? Colours take a plain portrayal to a whole new level and this shark is here to testify our claims. This one is clever in splashing vibrant shades and majorly focuses on the background more than the shark body. The result is that the shark still retains its real picture but becomes way more aesthetically appealing like you would expect a tattoo to be.

If you are in search of a mix between Japanese aesthetics and a shark tattoo, take a look at this design. A great way to add sharks to Irezumi is by the use of well-known patterns and flowers as is typically seen in any other Japanese tattoo art. This shark tattoo has also used a great range of colours, particularly the grey-green on the back of the shark, that add to the beauty of this piece. You can get these styles inked as a sleeve tattoo like that of the picture.

We talked about the Polynesian tribal tattoos that portray the sharks in a different light than the rest of the world. Similarly, a fish hook is of great importance to the fisherfolk of these areas as they earn their livelihood with the use of this one tool and other such services. In this case, the tattoo artist uses the sign of the hook and constructs a realistic design of these animals getting caught. These tattoo designs present the sharks in a rather painful than the ones we have seen till now. You can add more details on the hook and get these styles inked on your arm or calf.

It’s 2021 and people are getting their feet inked more than ever known. These tattoos are a great way to present an edgy style while still keeping the essence intact. Here, the shark tattoos take a similar trope with the tortoise and colour hues as ornamentation. This produces a simple trio of one hammerhead shark, a stingray, and a tortoise and connects the idea with a thread of colour.

Or should we say punny? This hammer tattoo has Mr. Hammerhead with a real hammer as a head, a straight face, and one tiny little hat with a bow. If you are no close to being a grave personality, go for these fun and edgy shark tattoos to complement your true colours. Place these tattoos on your forearm for those gags from your friends.

Hammerhead shark tattoos are a popular choice and, as we have shown, fun to style too. Unleash your creativity and produce more such cool designs that will mark your personality in a different light. To ease the process even more, next are some suggestions from our side to zhoosh up your shark tattoo game:

Still looking for inspiration, then checkout this blog post about shark tattoo ideas.