10 best hammer tattoo ideas you have to see to believe! 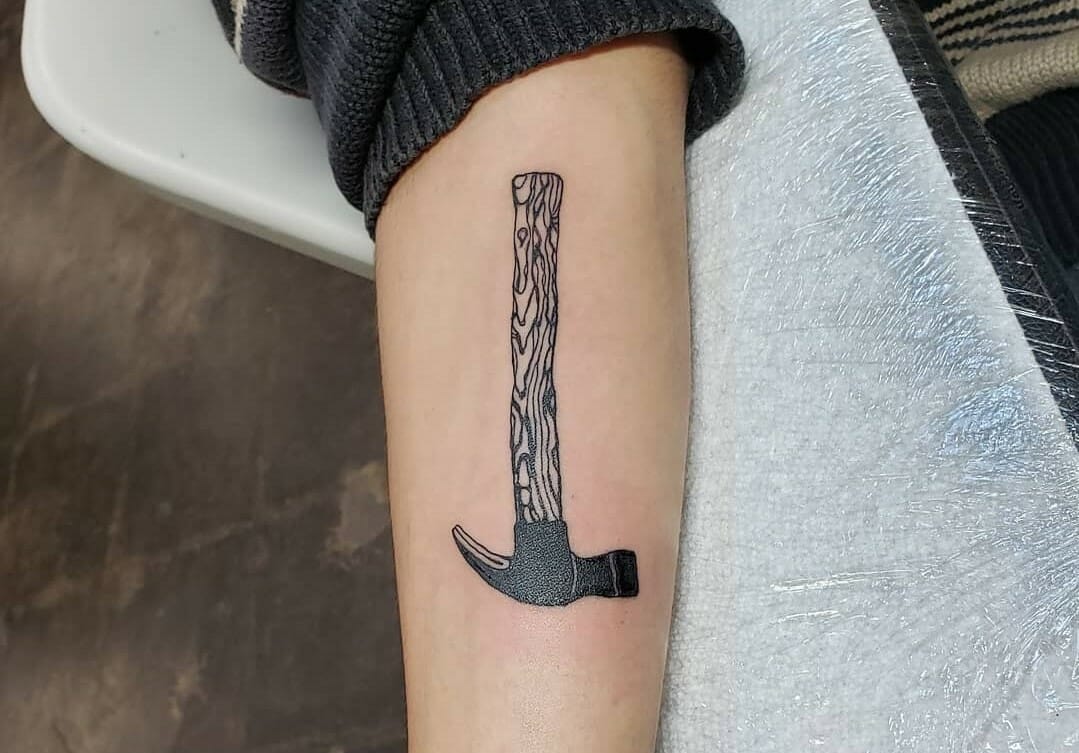 Are you looking to get a hammer tattoo? Here are 10 amazing hammer tattoo ideas you can explore and adapt and take part in a long legacy.

Surrounded by history and immersed in mythology, the hammer is one of the oldest tools used by humanity. Frequently featured in superhero films, hammer tattoos have become very popular in recent years.

What is a hammer tattoo? A hammer tattoo symbolizes brute force, physical strength, and might. It has been around since the stone age. The modern hammerhead is made of steel and undergoes a heat-treatment for hardness before it is set. The handle is made mostly of plastic or wood. The hammer derives its name from its ability to ‘hammer’ or deliver a blow like a firearm’s hammer or piano’s. The main use of a hammer is to set nails in wood, shape metal, or break rocks. While working with nails, the hammer also has a use as a tool to remove nails. Other types of hammers come in different shapes and sizes. The use of hammer as a tool began 3.3 million years and is still one of the crucial ingredients in any toolbox.

What does a hammer tattoo mean? The symbolism of the hammer was popularised by the Russian symbol of the working class. Hammer tattoos are literal symbols of an industrious attitude. Initially, the traditional hammer tattoo represented a tough mentality, courage, and standing strong against enemy attacks. A different representation was added when the Norse god Thor and Japanese god Daikoku became popular in recent times as symbols of power.

Here we explore classic hammer designs with many modern-day variations and even some that carry a hint of Superhero charisma. Let us go through this list of 10 best hammer tattoo ideas that you can recreate to fit your unique vision.

Mjolnir is the name of the hammer that belongs to the Thunder God ‘Thor’ as per Norse mythology. It is considered to be a weapon of destruction as well as a divine instrument. Various designs of Thors hammer tattoo were recently made popular with Marvel movies, based on the comic books. The movies explored various characters in Norse mythology and sparked discussions on mainstream media for several years. Admired by people around the globe, Thor and his hammer both have an international following. Having Thors hammer tattoo on your body is a symbol of power and honor. Thors hammer tattoo also means you are the protector of your home like Thor, who was the protector of Asgard.

For years, the combination of hammer and sickle has been symbolic of communism in Russia. This tattoo with two distinct tools represents proletarian solidarity – a union between the working class and peasantry. This symbol became popular during the first Russian Revolution and has continued to be an artwork or representation for various labor and communist movements worldwide. The artwork also represents the attitude of equality and rebel with a cause. The hammer also embodies masculine energy, while the sickle stands for feminine power, and bringing the two symbols together in a tattoo can mean gender equality. The hammer also indicates urban workers, and the sickle represents agriculture workers. This symbol has been interpreted in different ways by different communities, and you can pick a design to best express your version.

If you’re interested in the Viking way of life, there are many types of Viking hammer tattoo designs you can look to for inspiration! As depicted in many books and TV shows, tools and weapons are an important part of Viking culture. The Viking belief system, Norse Mythology, has been the inspiration of many instances in pop culture. The most adapted idea is Thor’s hammer tattoo. You will find that there are many variations to this concept, like Greek mythology’s symbolism about the Thor hammer tattoo. If you’d like a tattoo with a lot of intricate detailing, Norse heritage is a rich source of designs. Seeing as Thor can control lightning, engulfing his hammer in electricity is a fantastic idea for a tattoo.

Perseverance, tenacity, desire for power, and freedom are all characteristics associated with the hammer. If you embody similar principles in life, you can get this hammer tattoo and show off your convictions and philosophy to the world. It is a prevalent motif among men. In the olden days, the tattoo also meant standing up for oneself and their community. During the middle ages, the hammer was a symbol for blacksmiths who would forge out metals. You can get this tattoo done on the back of your hand as shown here, or on a larger area like the back.

Decorate your arm and hammer tattoo in a way that best expresses your work ideals. This is a great way to represent the community you stand for and the way you lead your life. If you are a carpenter or work with metals, you can display your passion and devotion to your craft with this tattoo. This tattoo can be a visual reflection of the work ethics and guiding principles of your profession. You can also dedicate this tattoo to your father, who worked hard to raise you and your siblings. Finally, it can represent where you come from with sheer hard work and determination.

According to historical information, a war hammer is the weapon used by foot soldiers and cavalry and was made famous by Judah Maccabee, a 2nd century BC Jewish rebel, and Charles Martel, one of the rulers of France. By the 15th and 16th century the war hammer had become an elaborately decorated weapon. This is a great reference and symbol for the inner warrior. Your tattoo can be designed with intricate patterns and combined with filigree work. The placement for getting this tattoo can be on the back of the arm, as shown above, or other places that offer a larger canvas. It looks like an ax, too, but the detailing can make it look more like the war hammer.

The traditional Norse hammer was popularized by Thor’s hammer. The era of Viking ascendancy saw small Thor’s Hammers used as religious amulets. The Hammer is a significant symbol for those who follow neo-Norse religions such as Asatru. Having a religious symbolism attached to your tattoo gives you strength and superpower. It can well enhance your belief and faith in the path you take, and a symbol like a hammer on your body that you see and feel can give you that boost of motivation whenever you want. Symbolically rich and visually appealing, this hammer tattoo is sure to stand out!

If you want to elevate your hammer tattoo with an intricate design, you can refer to this one for inspiration. A plain hammer head that looks like a sketch, with an eye-catching design on the handle. With detailed filigree work, you can add depth, texture, and character to a simple hammer tattoo. You can adapt the placement and size of the design shown here as per your preference, but keep in mind the meaning it holds while selecting the best possible design.

Feminine Representation Of A Hammer Tattoo

Suppose you want a tattoo design that is predominately associated with masculinity. In that case, you can add your own favourite elements to it, like in the above picture. The floral elements here indicate that the tattoo is a dedication to someone special. This is an excellent representation for someone who may not be working in those professions or has seen those difficulties mentioned above but wants to make themselves a part of a legacy they hold close to their heart.

A tattoo can be a visual representation of your fondest memory or your favorite person. Our parents will always be the most loved and respected figure, and dedicating a tattoo design to them in this way could be a fantastic way to carry their memories forward. You can get a similar piece done with all the motifs that remind you of your parent or someone special in your life and create a theme design.

Although the hammer is a symbol of masculinity, tattoo artists can help you draw and artistically represent your thoughts and design. It is a potent symbol that holds great respect and honor in everyone’s heart as the hammer has been used for centuries now in various fields. Even though the hammer may be mechanized now, we still love to use the physical tool around our homes. And when we find inspiration from mythology, we see so many warriors yielding from its power. As is commonly said, Thor is a powerful god and warrior, but his hammer is what makes him a superhero god. You can harness this same power and fearlessness with a hammer tattoo inked on your body.