10 Best Half Tiger Face Tattoo Ideas That Will Blow Your Mind! 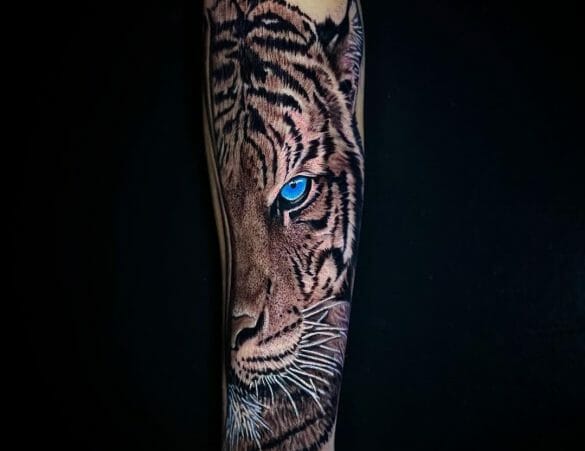 A tiger is considered to be an apex predator.

It makes sense to get a half-face tiger as a chest piece because it is a symbol of pride, beauty and those traits are closely related to the heart chakra. In this design, the tiger’s eyes are expressive, it is conveying the message of protection, courage, and grace. In China, the tiger represents a Chinese god, whereas in Japan it is believed that it is a symbol for a warrior. The Chinese tiger tattoo design is made in the traditional style of tattooing and has line strokes with no shading. The shading that has been done on the tattoo art is amazing, there are hints of white as well. Getting an animal tattoo is always symbolic, it means that you’re comparing your personality with that of an animal, this is self-expression and how you want to represent yourself.

Sometimes getting a tattoo designed as a body sleeve may it be on your legs or arms can be a good idea as it can also be a cover-up tattoo. Half-tiger face tattoos are normally made as a body sleeve as it gives the tattoo artist more space as a canvas. Sometimes a tiger tattoo design is made with a dragon tattoo design as they both have similar meanings. A dragon is considered fictional whereas a tiger is an animal that you fear in the wild. The tiger is a predator that kills its prey so it represents independence that you are strong and can make it through the dark. The meaning of this tiger tattoo is that you have the power to balance your life. This design has been made with a realistic approach and not in the traditional style as the rest of the designs.

A butterfly tattoo represents passion and wealth, similarly, a tiger tattoo is a representation of power, grace, and that you are in control of your life. You can balance and bring harmony to your life. In Japan, a tiger symbol of balance and freedom. Someone that has a tiger tattoo tends to have a fierce attitude. They tend to have a sense of passion. This tattoo design has a realistic design and the meaning of this design is that you have the courage and are stepping out of the dark stage of your life and letting go of anything that you think is evil. The artist has added different elements of nature as well to make the tattoo look mysterious as well. If you like your tattoo to have a mysterious look this design is the one for you.

When designs have symbols of nature as a tattoo sleeve or on our chest it represents that they want their design to be close to nature. Tigers as a tattoo represent strength and that you are the king, just like tigers are considered to be the king of the jungle. This is however debatable as lions are also considered to be the king of the jungle. It’s important that you communicate with your tattoo artist about your design, what it should represent, and what it should be. Since a tattoo is a piece of art on your body its should be a representation of you and makes you feel like you have a special power. This tattoo is a representation of strength and expression as the tattoo artist has added some detailing to the eyes of the tattoo. Sometimes people like to get a butterfly with their half-face tiger tattoo design as that is a combination of power with peace.

Women prefer getting a half tiger face tattoo design as it is a symbol of power. A tiger tattoo is a representation of wealth and innocence. Women prefer to get a tiger tattoo as a sleeve as it is visible and gives a sense of pride. Tigers are seen as symbols of power and being the king of the jungle. The tiger in the design has blue eyes which means that you are trying to attract good luck towards yourself. You may have been through something in your life and you want positive vibes. The eye colour of your tattoo also matters as there are different meanings to the eye colour of the tiger. Blue eyes represent positive vibes whereas red eyes represent strength. The blue eyes of this design look like they are focused on achieving a goal.

Blue and greyscale tattoos have become popularized in the past few years. The art that has been done on this design represents a sense of power and symbolizes the tiger as being strong and the leader of the jungle. The tiger has been made with the intention that you are ready to tackle life with your strength. Some people prefer to have their tattoos look fierce as they may be considered to be the underdog and they don’t want the world to push them over.

Half-face tattoo designs tend to always blow your mind because of the details that are added to the tattoo. Tigers are also known to be a symbol of protection. When a tattoo is made in the “realism style” it means that they look realistic. Tigers are considered to be royalty in some South Asian cultures and in this design, the eyes of the tiger have been made to look like it has grace with a sense of power. This is not the traditional style of a tattoo as there are lots of layers to the design. The tiger stripes are in thick black ink branching out on the forehead. The tiger’s realistic eyes are made in grey and have a shine. Traditional tattoos tend to be made with straight lines and not with layers. This type of design does take more than one sitting to complete as each layer takes at least an hour.

You must discuss the importance of your tattoo with your tattoo artist, as they would be able to give you some input as to what type of elements you can add to your tattoo. It is also important that you know the significance of your tattoo and what it represents. Some people like to get a red tiger or a black tiger.In this design, the tiger has black and grey fine shading and light blue eyes. These tigers represent ferocity whereas a white tiger represents prosperity. As you can see from the tattoo design, the tiger’s eyes are big and prominent. This means that you want to convey the message that you have the strength and grace of a tiger. This also means that if you are considered to be weak, it’s because you choose to be careful.

The meaning of a blue-eyed tiger is that you are resilient and you are protecting yourself from bad luck. The meaning of this tattoo design is that you feel like you need a break from bad luck. You want good luck to come your way. In this tattoo, the electric blue eyes stand from the design as the rest of the image has grey overtones. The popular placement of a half tiger face tattoo design is as a sleeve or as a chest tattoo as this is close to your heart. This is also because this is close to the heart chakra which is a representation of strength and resilience. Some people prefer to get a half tiger face tattoo with blue eyes as they may seem that life is not going the way they want it to be and they want something special to happen.

In this tattoo, a woman’s eyes along with a tiger’s eyes represent power and courage. They are one of the most popular designs and people prefer to club them together as a design. If you have recently lost someone that was close to you or you want a tattoo that represents strength and that you are your own superhero this design is the one for you. The design also has a mandala design next to the woman’s face as a mandala represents self-unity. This means that you are in intune with your spiritual self. If you want a design that represents strength and unity, the half tiger face tattoo design is the one for you. It represents unity, grace, and strength. Some prefer to add other elements to their tattoos like roses to make their tattoo have a deeper meaning.