101 Best Hakuna Matata Tattoo Ideas You Have To See To Believe! 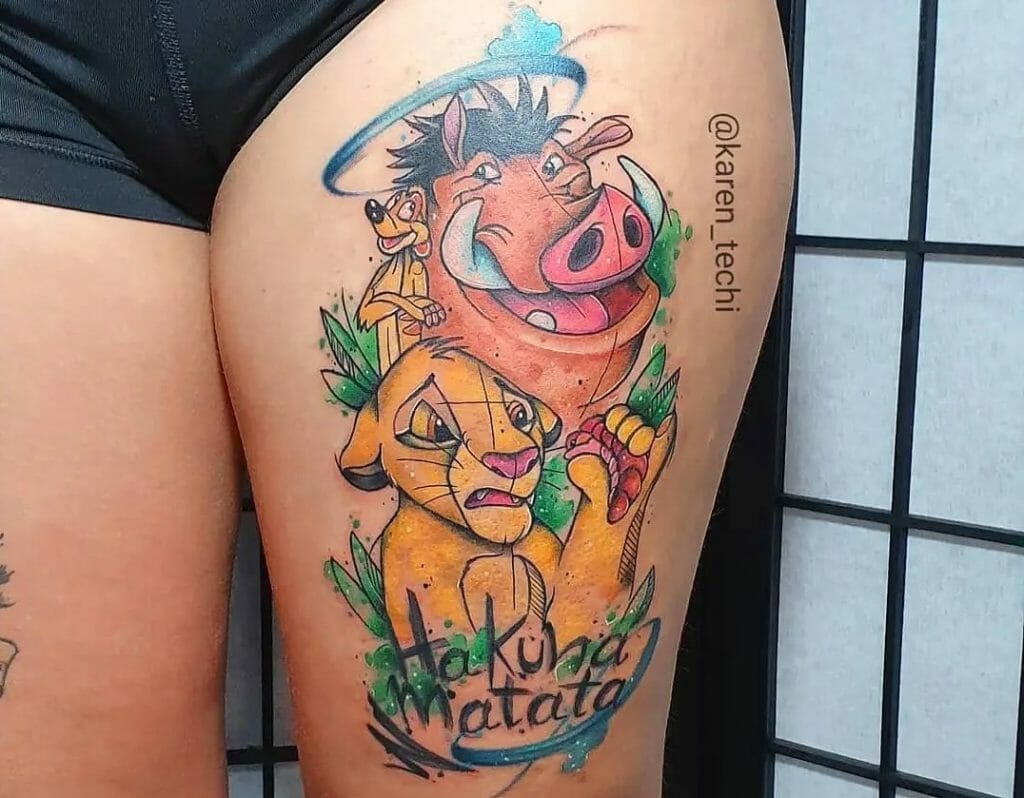 Is your life mantra simple and easy going? Check out these charming Hakuna Matata tattoos specially curated for people like you and get inked !

Even though the word ‘Hakuna Matata’ isn’t in Bible, the concept of ‘dont worry’ can be found in the Bible.

The Swahili phrase ‘Hakuna Matata’ instantly makes us think of the movie, The Lion King. It is a Disney classic everyone absolutely loves and the phrase was popularised by a famous song in the movie itself!

What does Hakuna Matata mean? Hakuna Matata basically means ‘no worries’ in the English language. While Hakuna Matata meaning is simple it has a deeper philosophical aspect to it. It is basically a way of life where one does not dwell on the unfortunate incidents that one faces in life. Instead, the goal is to carry on in a way so as to make the most of life, love with all your heart the people who matter, enjoy the small wins and not worry about things beyond one’s control. This is why it is a good motto.

Whatever ‘Hakuna Matata’ means to you, we got you covered! Below is a list of carefully curated and unique Hakuna Matata tattoo designs that will make sure your search ends here! So, Hakuna Matata and look no further!

This Hakuna Matata tattoo design is simple yet one of a kind and instantly recognisable! While many think this design is a pictorial depiction of the phrase in the Swahili script, its origins can only be traced back to the Lion King movies since the Swahili script does not have any such alphabet. The Hakuna Matata tattoo symbol looks like a cross between a treble clef and the infinity sign and can be made in any size as you please. It may be accompanied by stars or a planet as shown in the image. You may also add any other small object as you please.

This popular Hakuna Matata tattoo is for those who are really looking for a simple but distinguished tattoo idea. The infinity symbol means continuity and adds yet another beautiful meaning to this phrase. This tattoo is a really different way to use the Hakuna Matata tattoo theme as your way of life and use it to show that you consciously practise this philosophy in a continuous manner. The image of birds used to make the infinity sign definitely makes a style statement that is difficult to miss!

If you want a Hakuna Matata tattoo specifically for the wrist, check this out. The style and font used is a great choice for a wrist tattoo as the text fits perfectly. The artistic and dainty leaf motifs used on both sides of the text lends a mystical look to the tattoo. The best part about this Hakuna Matata tattoo is that an experienced tattoo artist will be able to make it within a very short duration of time and is well suited for those who prefer quick tattoos that hurt less.

If you are looking for a tattoo that brings together your love for this beautiful phrase and your love for the “lion king” movie then you need not look any further! This latest tattoo idea is a striking fusion of the two is truly a work of art! Therefore, we must recommend that you pick a talented tattoo artist worthy of creating this art for you. The trick lies in getting the correct space between the letters so one is able to identify the phrase without getting too distracted trying to figure out the shape of the lion.

Timon and Pumbaa will always be synonymous with the phrase Hakuna Matata for everyone who has watched this iconic movie. After all, they are the ones who taught Simba to lead his life in sync with the philosophy behind this phrase when Simba was at his lowest and became a big part of Simba’s life! The body of this tattoo depicts Timon and Pumbaa as they first appear in the Hakuna Matata song that truly popularised this phrase. The splash of colour outlining the animal figures and the choice of the colour palette add to the forest theme depicted in the song. This is the perfect tattoo for anyone who is a fan true fan of this hilarious duo!

This is one of the monochromatic Hakuna Matata tattoos that is quite popular amongst those who don’t like bright colours on their tattoos. The tattoo depicts the entire squad of your favourite Lion King characters happily marching on with the Hakuna Matata phrase appearing in the centre. The granulated texture of the shading adds depth to the tattoo and makes it appear as though it has come straight out of a sketchbook! Ensure you pick a tattoo artist with some expertise in shading and you are sure to have a new tattoo that is worthy of being flaunted !

This Hakuna Matata tattoo is popular amongst dreamers. The depiction of the night sky on the tattoo is galactic and the moon adds a mystical charm to the aura of this tattoo. The images of baby Simba, Timon and Pumbaa are completely darkened. This lends a shadowy effect to the overall look of the tattoo and makes the figures of the animals appear well defined. The stars in the night sky and the colours used to create the sky further add to the dreamy vibes of this tattoo.

This solid Hakuna Matata tattoo is a great pick for men looking to get inked on their chest as seen in the reference image. The tattoo depicts completely darkened out, charcoal black images of Timon and Pumbaa with the text “Hakuna Matata” appearing at the bottom. You can get the phrase “Hakuna Matata” tattooed in Disney’s iconic “Waltograph” font to achieve that added Disney effect!

This Hakuna Matata tattoo idea is for those who love vibrant colours on their tattoo. The tattoo is in itself quite simple with the outlines of a fully grown Simba, Timon and Pumbaa marching forward. The tattoo is an adaptation of one of the most iconic scenes from this classic movie. The phrase “Hakuna Matata” appears at the bottom in a simple cursive font with a splash of all the colours of the rainbow smeared across the tattoo!

In the unlikely event that you still haven’t taken your pick from the carefully curated list of Hakuna Matata tattoos above, we recommend you check out the options below:

What is the meaning of the Hakuna Matata tattoo?

The Hakuna Matata tattoo is an expression that has become popularized by the Disney movie “The Lion King”. It translates to “No Worries” and symbolizes a carefree attitude towards life. The phrase was originally derived from Swahili, a language spoken in East Africa. This design can be interpreted as a reminder to remain positive and not let worries consume your life. It’s a great way to express one’s inner peace and optimism! The Hakuna Matata tattoo is available in a variety of styles, colors, and sizes, so you can customize it to suit your individual style. Whether you’re looking for an inspirational or whimsical design, the Hakuna Matata tattoo is sure to bring a smile to your face. Its cheerful message will remind you to take life lightly and find joy in the little things. So, go ahead and show off your carefree attitude with this uplifting reminder!

How much does a Hakuna Matata tattoo cost?

The cost of a Hakuna Matata tattoo varies depending on the complexity of the design, size, and location. Generally speaking, small designs can range from $50 to $150, while larger or more intricate designs can be upwards of $200-300 or more. For large pieces that require multiple sessions, the price increases with each additional session. Your tattoo artist will be able to provide you with a more accurate estimate based on the specifics of your design. Ultimately, the cost of your Hakuna Matata tattoo will depend on what you want and how much work is involved. It’s important to always make sure that you are happy with both the price and quality of your tattoo before committing.

How do I take care of my Hakuna Matata tattoo?

Your tattoo artist should provide you with aftercare instructions that are specific to your particular design. Generally speaking, it is important to keep the area clean and dry at all times by gently washing it twice a day with mild soap and warm water. Always make sure to pat the area dry with a soft cloth or paper towel afterwards.

What are some of the most popular Hakuna Matata tattoo designs?

One of the most popular designs for a Hakuna Matata tattoo is an image of Simba from the Lion King. Other ideas include words and phrases, such as “Hakuna Matata” or “No Worries”, surrounded by tropical flowers or tribal symbols. Tribal inspired artwork is also commonly seen with this design, such as suns, moons, and stars. You can also get creative with your design by incorporating symbols or imagery related to your own life and experiences. Whatever you choose, make sure that it has personal meaning for you and expresses the carefree attitude that Hakuna Matata symbolizes.