10 Best Hades Tattoo Ideas You Have To See To Believe! 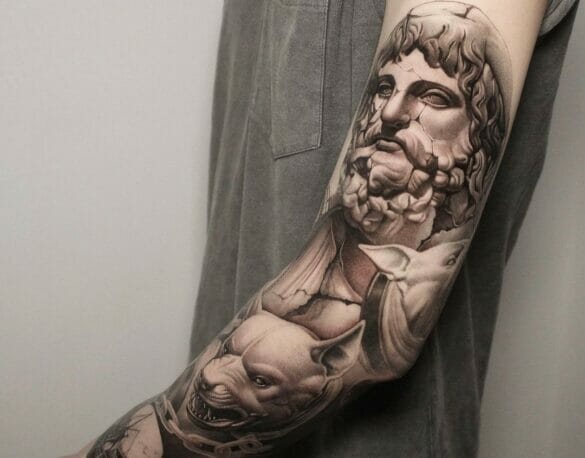 If you like all things dark and Grecian, why not get inked with the ruler of the underworld? Here are our top 10 Hades tattoos that will blow your mind!

Hades is considered to be the magnificent God who rules over darkness, the dead, and wealth.

He is often feared for the duties that he is endowed with and has been referred to as “The Infernal Zeus” for his incredible power and wrath. In Grecian mythology, the deity is generally identified by his bident, Cerberus the three-headed dog, his scepter, and chariot.

The common myth that one associate with Hades is that of his abduction of Persephone. It is believed that he was charmed by Persephone’s beauty and femininity and eventually fell in love with her. But given his background, Hades was convinced that she wouldn’t agree to be the queen of the dark realm and abducted her. Less is known about their marital life but it is assumed that they remained true to each other and Persephone was given the highest position in ruling the dead. Thus, a Hades tattoo will be symbolic of fearlessness, grandeur, wrath, and power. Keep scrolling to find a range of Hades tattoos and choose your pick!

This calf tattoo showcases Hades with a hollow skull and his dog in a mortifying picture that is impossible to look away from. The chains and his crown make a significant addition to the design in black and grey.

If you search for abstract, water-coloury tattoos, this Hades and Persephone tattoo might allure you in. Hades is characterized by an all-black demeanor while Persephone is touched with light grey and red ink. Such a contrast reverberates the ancient myth and highlights their love despite the many differences.

Hades has also been adapted in a popular game in the last year and many people are not over it yet! This is the portrait of his son, Zagreus who strives to escape out of the underground world by fighting lost souls. The tattoo design portrays Zagreus in vibrant colours while maintaining his original stature in the game.

The artist here presents a unique image of the deity with his dog. The two are inked in a statue-like fashion and presents Hades in a more humane light while Cerberus dog is left as ferocious as always. This tattoo seems remarkable for its background that resembles a geometric circle and the five lines representing five rivers.

Hades Arm Tattoo With A Skull

You can easily fashion a deadly tattoo without having to use Cerberus. Here, the idea is to use dark shades. Hades is almost fully inked in black with a crown while holding a grey skull. These tattoo designs are apt for men who prefer a neat yet sublime tattoo.

Similar to the previous design, this tattoo takes the wrathful image further forward by introducing flames that pop up in an image of black ink. It also adds a little something to look at in the tattoo.

Finally, the unforgettable villain who we all love! With the annoyed look on his face, the artist does full justice to the Hades from our childhood. The blue rose complements Hades and binds the design together. Moreover, this tattoo beams of bright blue, black, and purple ink that will stand out no matter where you place it.

Hades In A Rhombus Tattoo Designs For Men

If you like to experiment with your tattoo designs, search for a background that will add a dimension to the art. The simple representation of a rhombus gets this image a simple yet chic look that makes Hades come to life.

This Greek god back piece brings together Hades, Zeus, and Poseidon into the same picture. The brothers can be identified by their special powers and weapons, making it an incredible Grecian art for men.

If you are into designs that blend the ancient with the contemporary, you have to check out this one! This Hades comes all the way from Disney to Greece in the quintessential way that we imagine. Shading, coupled with colour brings out the best of this image. You can place it anywhere you want without having to worry about its charm.

Greek tattoos are always in fashion no matter the age that we are living in. You can also experiment with the Roman Pluto for more options at hand. Besides, here are some more tattoo designs for men for your next tattoo ideas: