10 Best H﻿awaiian Tribal Tattoo Ideas You Have To See To Believe! 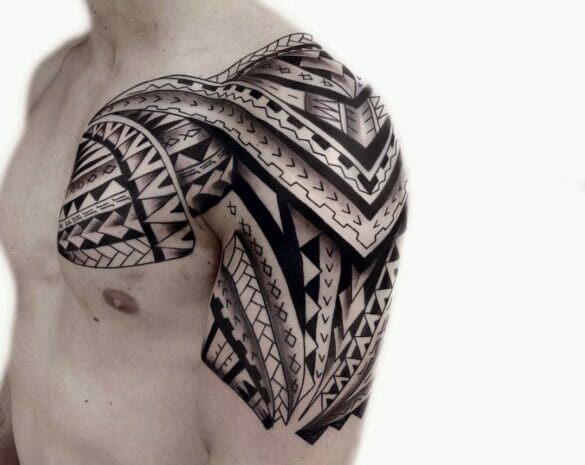 Looking for some amazing ethnic designs to show your cultural inclination? Check out our list of Hawaiian tribal tattoo designs for awesome ideas!

Hawaiian tribal tattoos are a craze for tattoo enthusiasts inclined towards indigenous communities and their native culture.

Kakau, or the traditional art of tattooing of the Hawaiian Islands, stands as an emblem of bravery, honour, and regard for one’s family ancestors. Both men and women could get these tattoos in the past, although men got marked more than women.

The idea of Hawaiian tribal tattoo was honouring but at the same time primitive and exceptionally painful. The practice involved scarring the skin into an open wound of some sort and pour a mixture of ash and soot from the burnt kukui tree. As crazy as it may sound, the practice was highly valued by the Polynesian folks. In fact, if someone showed any manner of disrespect through their lifestyle choices, they would be barred from getting a tattoo. So yes, if you don’t view the Polynesian cultures with respect or understand and acknowledge their way of life, you will possibly be hurting sentiments without even intending. These tattoos would also represent regarding for God and thus should be carefully handled. That being said, below are some of the styles that are must in 2021.

Being inherently associated with oceans, traditional tattoos exhibit the shark as a symbol of strength, courage, and protection. As are sharks in the ocean, the wearer of this tattoo will also be headstrong and sure of any given circumstance. There is a curious style of patterning done in this Hawaiian tattoo. The fins follow the same triangular design in black ink along with the body of the fish showcasing vivid Polynesian tattoo decorations. You can even opt for a shark tattoo with a much simpler patterning to keep intact the symbols and meanings attached to the shark.

Hawaiian Tribal Tattoos On Back

These Hawaiian tribal tattoos are actually a clever way to utilise your back without having to go all in. Featuring a Spartan figure with his shield and weapon, this tattoo oozes out the courage and martial ability of an innate fighter. The fact that the Spartan has a similar tribal tattoo on his arm speaks volumes about the significance of this tribal Hawaiian tattoo coupled with the bold patterns in black.

If you like your back tattoos simple and chic, this tribal design could be your inspiration. Here, the tattoo art follows a rather minimal take on the traditional Hawaiian tattoos and runs down the spine of the wearer. The ensemble appears to look like an arrow that stands as a symbol of precision, accuracy, and direction.

Tribal Hawaiian patterns will make for brilliant arm tattoo designs and this sleeve tattoo is here to show it. Following the conventional mode of inking, this tattoo also incorporates black ink but takes it a level up with the earthy touch of brown. The result is an absolutely phenomenal piece of Polynesian art that you will never get tired of. It is symmetrical almost throughout the structure with minor alterations. You can even extend the length to your wrists to get beautiful full-sleeve Hawaiian tattoo designs.

Capture a perfect botanical image with this Hawaiian tribal tattoo that is too pretty to miss! This vibrant bird is inked mid-flight with two of the most significant flowers of Hawaiian culture- Hibiscus and the Birds of heaven. The beaming Hibiscus complements the bright green of this tattoo with the black flowy style mimicking stems and represents the native Hawaiian culture to its fullest. Placing this design on your clavicle will give it a fair chance to bloom and further facilitate its appeal.

This monochromatic ordeal rather focuses on the Hawaiian Hibiscus more than the tribal tattoo art. The flower is unconventionally drawn and can really be recognised with the quintessential leaves. This Swallow bird is minimally crafted with black ink and placing such Hawaiian tribal tattoos on legs represents a sense of mobility and progress.

This is a super cool way to reimagine tiki and incorporate them into your Hawaiian tribal tattoos. Tiki, a masked being is often used in tribal tattoos as a symbol of ancestry. Tiki refers back to the history of the family and its related customs and culture. They also represent the protection offered by the late ancestors that hover over life and take a divine form. This Polynesian tattoo puts the garb of the skull on the tiki and presents the traditional with contemporary trends. The tattoo design includes fascinating sketches on the head and chin of the skull. You can get this symbol on your chest to highlight your regard for your family history or on your arms to stress upon strength and protection.

Traditional Hawaiian tattoo designs wouldn’t really be complete without the mention of flowers in this list. Polynesian cultures have the most exotic flowers to relish and display to the world. Hawaiian tribal tattoos also feature the vibrant Hibiscus flower and Plumeria as is evident from this flower tattoo. This tribal tattoo design exhibits the ancient design alongside the monochromatic flower that becomes the centerpiece of its beauty. Placing the flower on your ankle is symbolic of progression and a forward movement in life, although you can place such tattoo designs anywhere on your body.

Hawaiian flower tattoos are immensely popular among the Hawaiian tattoo designs available to us, and quite justifiably so. Here, the artist attempts a colourful take on this Polynesian bunch of flowers. Tattooing your ankle with colour not only brings attention to the piece but also acts as a symbol of your blooming personality.

This Hawaiian tattoo poses for a sea turtle that encapsulates a glimpse of the island within its shell. Interestingly, this turtle is inked without any definite outline! The oceanic waves can be seen as a consistent symbolic element in the limbs of the turtle that binds together the water body on the interior with the periphery. Note the soft reddish glow of the sun that brilliantly accentuates and brings to mind an image of an evening on the island.

Turtles are considered to be a precious symbol of fertility due to their long life and have often been spotted in many of the popular Hawaiian tribal tattoos. This Maori turtle brings in a minimal yet bold outline that is a remnant of a traditional tattoo but with added hints of modernity. The definite outlines in this turtle tattoo highlight the symbolic implications of a turtle to the men and women of Hawaii. The style is trendy and serves to represent the islands with the utmost regard.

You might have already observed that certain Hawaiian tattoo designs bank on a bunch of flowy symbols to stand out from the crowd of showy bold blacks. Well, these wavy patterns contain a various small symbol that contains myriads of meaning and depth. This Hawaiian tribal tattoo contains the symbol of waves, Enata, tiki eyes, and many more symbols and meanings in its curvature.

This Polynesian tattoo on the other hand brings together the floral imagery along with the turtle to stand as a solid symbol of fruition, fertility, and timelessness. The flows are kept simple to focus more on the centerpieces and will make a remarkable Hawaiian tribal tattoo no matter where you place it on your body!

This colorful Polynesian tattoo design features a Leiomano, an ancient Hawaiian weapon found in Polynesian cultures crafted with shark teeth that could make significant damages to the victim. Thus, this weapon might also be seen as a symbol for stealth, and placing it on the forearm would signify the wearer’s capability to perform such sleek attacks. Unconventional Hawaiian tribal tattoos as this show a far greater room for experimentation when it comes to Hawaiian tattoo designs and can definitely be brought back in 2021!

Fascinated with geometric patterns? So is Hawaii! Constructed over triangles, this tribal tattoo shows us how to own a badass geometry on the clavicle. The white triangles represent shark teeth alluding to the kind of life lead by the people of Hawaii, simultaneously referring back to the elements that constitute the island. Placing this Polynesian tattoo on your chest would aptly convey your fearlessness and strength.

Hawaiian tribal tattoos display a range of motifs to be playful with. The symbols and meanings associated with the culture make it primal to understand and acknowledge their way of life before tattooing. The simple tattoo designs contain humongous regard for one’s family and it is a culture where the gecko is also considered to be a divine entity in charge of the protection of lives. Thus, always do a little research on tribal tattoos so as to not hurt any sentiments whatsoever. Having said that, here are some of our suggestions for your tribal tattoos: