10 Best Gundam Tattoo Ideas You Have To See To Believe! 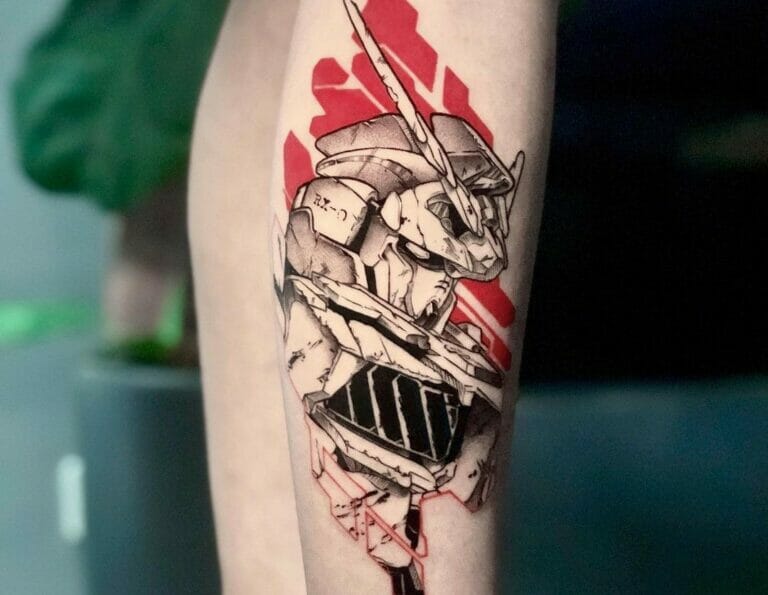 Want some ideas for awesome Gundam tattoo designs? We have curated the best list of tattoo ideas that all the Gundam fans out there will definitely like!

Gundam is an all-time favourite for all the 90s kids out there and is still popular among teenagers and kids born after the 2000s.

This mecha anime based on Japanese military fiction is absolutely adored by millions of anime fans or ‘otaku’ across the globe. Yes, Gundam is extremely popular in Japan, however, the anime series and the highly familiar merchandise (mecha robots or accessories) can easily be recognised globally by people from various generations who are not even full-fledged anime fans.

Gundam has caused waves in Japan similar to the Star Wars franchise in the United States. Not just that, the series broke out of its initial geographical boundaries in the island country and reached the homes of millions of fans across the world in a matter of months since its release. The series also released multiple sequels, movies, games, comics (manga), OSTs (original soundtracks) and even some live-action films. Gundam is one of the few series that has stayed popular among the newer generations as well, thus ensuring that the series keeps attracting new fans every day. Regardless of one’s age, no one is ever really shy enough to not show their incredible collection of Gundam action figures. Similarly, a Gundam tattoo is also a great way of showing how big of a fan you are of the series to other fans. One can even decide to get a Gundam tattoo to simply draw inspiration from it or for personal satisfaction. The series also features extremely valuable lessons that one can benefit from and many elements that can motivate fans to do their best in various spheres of their life. Fans who possess their favourite Gundam tattoo designs feel more connected to the series and what the characters symbolise in the storyline. You can use this curated list of the top Gundam tattoo designs and ideas that will definitely inspire you, to visualising the tattoo of your choice.

This is an incredible tattoo of the head of a rugged RX-178 Gundam Mk-II developed by the Titans. This mecha was first featured in the Mobile Suit Zeta Gundam instalment of the series and it is one of the successors of the highly popular RX-78-2 Gundam that proved to be extremely valuable during the ‘One Year War’. This particular tattoo showcases the mecha after a rumble that leads to the massive Gundam getting caught up in some moss, shrubs and weeds, making this tattoo quite rare and extremely attractive to look at. Instead of a tattoo of any new and shiny mecha, this one looks like one of the RX-178s piloted by Edmund, Emma or Quattro that has seen battle and actively participated in it.

Mobile Suit Gundam SEED is the ninth instalment of this popular franchise and is believed to be one of the most favourite anime out of all the various Gundam titles. It is declared to be the best Gundam series featuring an alternate timeline and focuses on intense character development. This is one of the most memorable titles of the series and you can easily draw out art ideas from this series for your tattoo. You can easily ink your arms with a Gundam tattoo featuring a GAT-X105 Strike, GAT-X252 Forbidden, MBF-02 Strike Rouge, GAT-X370 Raider, ZGMF-X09 Justice or any other giant robot featured in the SEED series.

Mobile Suit Gundam Wing is arguably one of the most acclaimed anime series of its time, featuring the most popular giant robot mechas of that era (the 90s). A Gundam Tattoo from this series is a great idea for Gundam fans as the sixth instalment featured one of the most intense storylines where mankind had vastly colonised space. The series features many of the best giant robot mechas of all time in anime history, beating the mechas from other anime such as Neon Genesis Evangelion with ease in popularity.

Gundam Wing Zero is also immensely loved by fans around the globe, featuring new truly cool giant robot designs with more advanced technology. Getting giant robot ink such as this is a really awesome way of showing how big of a Gundam fan you are. Regardless of the fact that people are anime fans or true Gundam fans, they will definitely love your Wing Gundam Tattoo.

If you like arm tattoos and robots in general, you can also get a robot arm tattoo on your other arm. Combining the elements of a giant robot ink and a robot arm tattoo, you can display your affection towards giant robot mechas and cybernetically controlled limbs. It would almost be like you are a mecha pilot but also a cyborg at the same time. These kinds of tattoos are also great ideas for a Gundam Tattoo Sleeve.

This tattoo is definitely one of the top 50 Gundam tattoo designs out there for putting ink on your entire back. You can also choose to get a G Gundam King of Hearts tattoo as this particular giant robot looks completely different from the other mechas in the anime. Fans love this awesome giant robot as it is truly one of a kind and very few own a tattoo of this Gundam. G Gundam tattoos would be incredibly appreciated by fans all around the world, probably making them stare at your special anime ink in awe. Giant robot mechas from this series can definitely provide inspiring ideas for the top 50 Gundam tattoo designs.

This ink idea is definitely one of the top 50 Gundam tattoo designs for your arms or legs. This tattoo mixes the ‘clear-colour’ or real-type (red) version of a Core or Rise Gundam along with flowers of the same colour, thereby producing a truly beautiful body ink idea.

The first Gundam tattoo is an example of a truly aesthetic tattoo that features the beautiful Gundam RX78. It is a symbol of power and it sports an incredible design that is great for both assault and situations where extreme agility is required. The second tattoo is also a great example of mixing a giant robot up with other aesthetic elements. You can also design our own giant robot tattoo, ink a flower of your choice and even put your sign in there.

Anime tattoos are incredibly popular among individuals who love anime and even among others who find anime artwork inspiring or aesthetic. You can get definitely ink yourself with a Gundam tattoo inspired by this list or you can choose a Gundam out of the dozens featured in this extremely popular franchise.