10 Best Gryffindor Tattoo Ideas That Will Blow Your Mind! 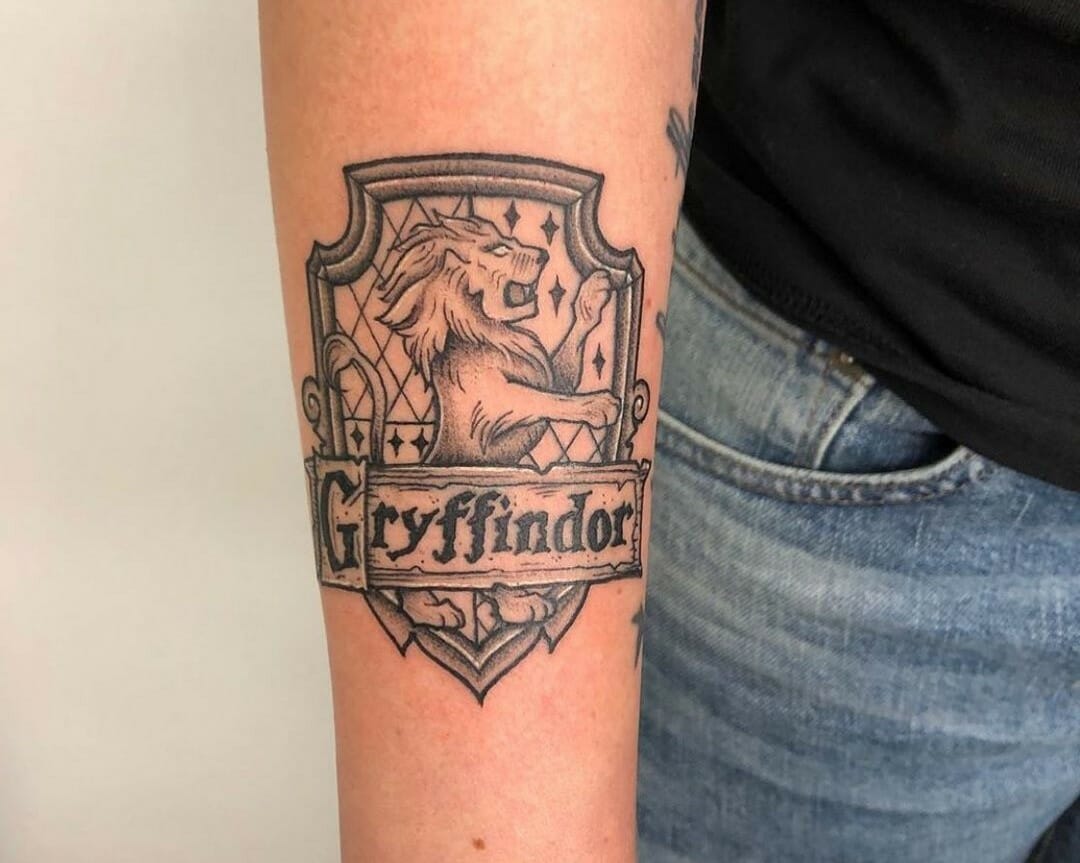 Looking for your favourite Gryffindor tattoo from the famous Harry Potter series? If you are looking for viable options, then this list is a must-read for you!

The Gryffindor house, whose key qualities are bravery and determination, is one of the four Hogwarts houses in the fictional series Harry Potter, written by J.K.Rowling.

The world of Harry Potter is a magical one, and the three other houses are Slytherin, Ravenclaw and Hufflepuff. The students at Hogwarts, the magical school, are assigned their houses by a sorting hat and they stay in their houses throughout their seven years of school life.

The notable members of Gryffindor, in addition to the founder Godfric Gryyfindor, are Harry Potter, Hermione Granger, Ron Weasely, his brothers, Ginny Weasely, Neville Longbottom, Sean and many others, Their house teacher is Professor Minerva McGonagall, who happens to be one of the strongest witches of the wizarding world.

Harry Potter, Hermione and Ron are the three most important Gryffindor members in the book series and in the movies as well. Therefore, this cute tattoo which has a cartoon version of them wearing traditional Gryffindor costume shows the deft work of the tattoo artist who has put forth the essence of Gryffindor effortlessly with this portrayal.

Deathly Hallows Tattoo With The Color Of Gryffindor

It is no secret to hardcore Harry Potter fans that the Gryffindor crest tattoo or the Gryffindor sword tattoo would be a great pick for anyone who relates to the house. However, the three brothers of the tale of the Deathly Hallows and Death himself are also often seen to represent the four houses. In this tattoo, the Gryffindor colours of red and yellow take prominence, thus making it a subtle Gryffindor tattoo.

Everyone who has followed the Gryffindor house and has watched or read the beloved series knows that Luna Lovegood is not a Gryffindor but a Ravenclaw. However, what makes this one of the best tattoos for any Gryffindor fan is the quirky combination of the Gryffindor lion, symbolic of bravery and the Gryffindor team, and Luna herself. The sorting hat might have put her in Ravenclaw, but fan theories would go ablaze after seeing this tattoo.

Ron, Harry, And Hermione Shine As Brave Gryffindors In This Tattoo

As with one of the previous tattoos, this one too has three of the brightest stars of Hogwarts and Gryffindor. Gryffindor is the most popular among the four houses and the presence of the three main protagonists in the same house is proof of that. There are rarely any tattoos dedicated to any Slytherin members except Snape, and as far as Harry Potter tattoo ideas go, these three Gryffindors taken together in the signature blue filter common to the last few films would be a great fit for anyone.

Harry Potter, the eponymous protagonist of the beloved series comes in a unique harry potter tattoo which is not your standard Gryffindor lion tattoo or a symbol of Gryffindor. It is just the way magic flows the art of tattoos and the way ink displays this true Gryffindor on your skin. It is a three-dimensional tattoo, with the trademark gold of Gryffindor all over the scarf of Harry. He is seen on a broom, probably the Nimbus 2000 and Hedwig is probably somewhere near.

The Bravest Of The Brave: The Ethics of Gryffindor Reflected In The Stubborn Eyes of Youngsters

Granger holds a wand, not the elder wand but a generic wand and shows her friends from Gryffindor how to do the spell Wingardium Leviosa, to levitate a non-living object. The way these two, Ron and Harry would go on to use the spell later in the first book is truly characteristic of their being in Gryffindor. They were the ones who fought the hardest against Voldemort along with Neville.

The Gryffindor Lion Roars Loud In This Monochrome Tattoo

The lion which occurs on the crest of the Gryffindor house is a symbol of the courage and bravery that gave the Gryffindors and everyone else the heart to fight in the final battle of Hogwarts. In this monochromatic tattoo representing the lion of Gryffindor, we get to see it roar and it reminds us of the times when Neville killed Nagini or when Ron figured out how to destroy the Horcruxes.

Gryffindor And The Three Other Houses Brought Together In One Tattoo

The four houses of Hogwarts together make up the Hogwarts crest. This is a versatile tattoo that can be seen as a Ravenclaw tattoo, a Slytherin tattoo or a Hufflepuff tattoo in addition to it being a Gryffindor tattoo. When it comes to tattoos, this is the kind of versatility that people are looking towards. It is one of the best Gryffindor tattoos out there.

The Hogwarts Castle, The House Of Every Gryffindor As A Tattoo

Godric Gryffindor along with the three other founders helped build Hogwarts, so any tattoo that has the castle in it is a Gryffindor tattoo from many perspectives. Moreover, this school houses one-fourth of students who are Gryffindors anyway. If you want to go for a less obvious Gryffindor tattoo or a generic Harry Potter tattoo which can be interpreted in many ways, this is the one for you.

It is no wonder that dogs are the cutest of animals, and when you assign them items belonging to humans, they tend to become even cuter. Take this dog for example it is wearing a Gryffindor scarf which has made its beady eyes shine all the more. Just like the standard Gryffindor student, the dog is both brave and courageous. Therefore, it shines as a brilliant choice for a tattoo for someone who loves animals, the magical world of Harry Potter and this house.

However, this is not all there is. You can also consider these options if you are looking for small harry potter tattoos for the Gryffindor fan in you