10 Best Grogu Tattoo Ideas That Will Blow Your Mind! 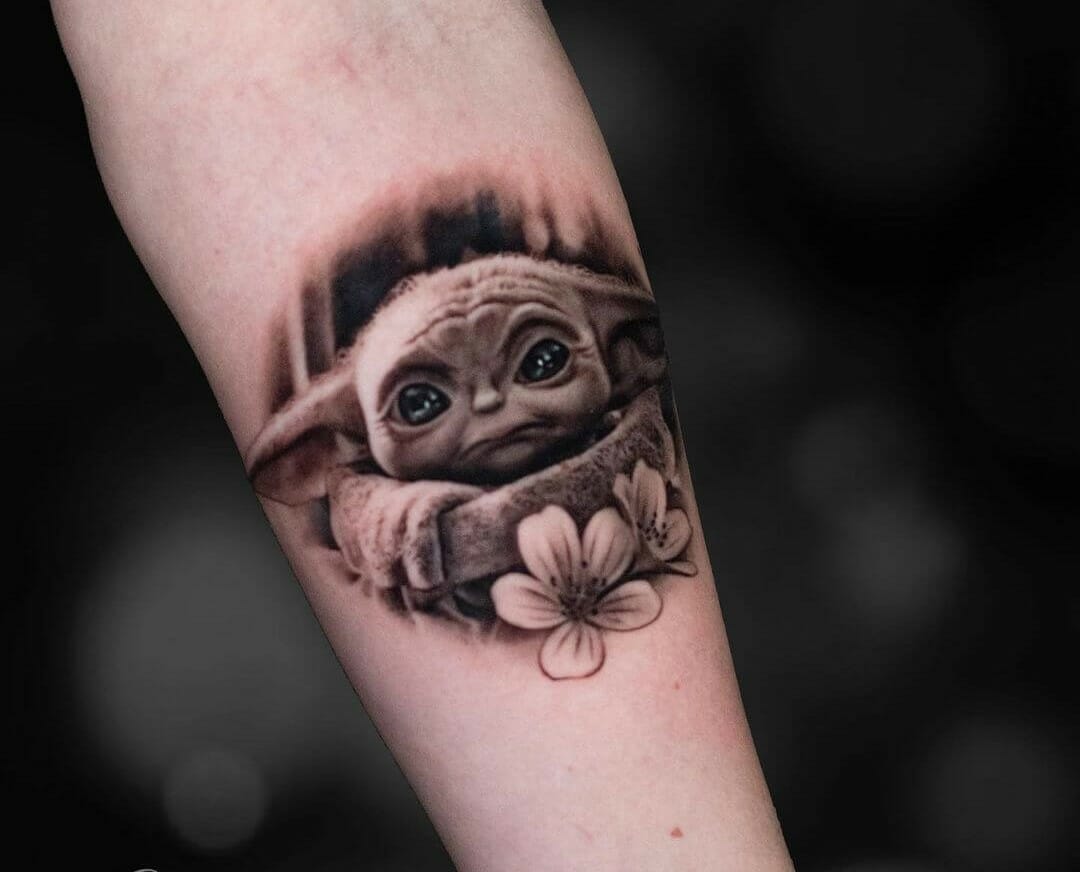 Are you also overwhelmed by the cuteness of Grogu or ‘Baby Yoda’ from ‘The Mandalorian’? Then here are some amazing Grogu tattoo ideas for you to check out!

There are very few ‘Star Wars’ fans who do not know of the famously adorable Grogu.

When the Disney+ series ‘The Mandalorian’ first came out, loyal ‘Star Wars’ fans all over the world had started to watch the show as it was a part of the franchise. However, all the fans were shocked and surprised when they realized that the show had its own ‘Baby Yoda’!

Through out the series, it was slowly revealed that although Grogu was a member of the same species that beloved Jedi Master Yoda belonged to, they were not the same people. Soon, the cute antics of Grogu and his cuteness made him extremely famous along with his adopted father Din Djarin, who is the eponymous hero of ‘The Mandalorian’.

If a person is getting a tattoo for the first time, then they should definitely start with a smaller and simple tattoo design that they can manage easily. Consequently, if you are a tattoo novice and want to get a really cute tattoo based on the ‘Star Wars’ series, you can definitely choose an adorable Grogu tattoo that will be absolutely perfect for your first time!

If you have gotten many tattoos and are quite experienced, then you can also look at some more elaborate ‘The Mandalorian’ tattoo ideas. As can be seen in the picture, the wearer has gotten a ‘Mando’ tattoo along with Grogu which is heavily shaded with black ink.

If your aesthetic is really simple and minimal, then you must look for a tattoo that is tiny but cute and pretty nonetheless. You can also draw some inspiration from the image above where the wearer has gotten a tiny little ‘Baby Yoda’ tattoo. Even though the size of this tattoo might be small, it will still be quite attractive and eye-catching.

Awesome Grogu Tattoo Ideas For Fans Of ‘The Mandalorian’

If you are a fan of ‘The Mandalorian’, then you know how Din Djarin would always ‘This is the way’ and wanted to follow ‘The Way’ always. ‘The Way’ inspired him as a person to go ahead and look for a home for Grogu. Even though he was quite staunch and daring, he was also quite caring as a person and only wanted the best for Grogu. If the story of Din and Grogu fills you with love and hope, you should definitely get a lovely Grogu tattoo.

The special bond between Grogu and Din Djarin was something that ‘The Mandalorian’ explored in depth. After all, Din Djarin had many choices in front of him which he could have chosen from. However, once he had found Grogu, he also became attached to him and wanted to keep Grogu with him and save his life till they could reach his home. If you are a fan of the paternal bond between Din Djarin and Grogu, you can look at the image above for some heartwarming inspiration of a sweet tattoo.

Here are some awesome Lightsaber tattoo ideas for fans of the ‘Star Wars’ franchise!

Amazing Tattoo Sleeve Design With Grogu And The Mandalorian

If you want a complex and elaborate tattoo based on ‘The Mandalorian’, you can also get a tattoo sleeve based on the popular show. The show is based on Din Djarin who wanted to follow ‘The Way’ but had to prioritise different things once he started to look after Grogu.

A tattoo sleeve is also quite favourite among tattoo lovers because they ensure maximum visibility and space for great work. You can also add a Mandalorian helmet tattoo as can be seen in the picture above.

Adorable Grogu Tattoos That Are Easy To Place Anywhere

If you are looking at ‘Baby Yoda’ tattoos but are worried about their placement, you should take a look at the image above. Grogu or ‘Baby Yoda’ tattoos are quite easy to place anywhere on your body as they can be quite small in size as well. Consequently, you just have to talk to your tattoo artist and let them know what kind of a design you want.

There are plenty of ‘The Mandalorian’ tattoos on the internet made by fans of the show or the character of Din Djarin. However, if you want your tattoo to express the real essence of the show, you should ask your tattoo artist to replicate any of the beautiful and heart-touching scenes from the show. In the image above, the wearer has gotten a tattoo of the first time that Din and Grogu met and reached out to each other.

If you want some more inspiration about this franchise, check out these awesome ‘Star Wars’ tattoos!

Grogu or ‘Baby Yoda’ is a wonderfully happy little person who is almost always oblivious of his surroundings. More often than not, one can find him running around and getting into mischief while Din Djarin is busy fighting off the enemies. In addition to that, who can forget the scene where Grogu uses the Force to eat the blue macaroon? If you want a ‘Baby Yoda’ tattoo that truly suits the personality of the tiny little mischief-maker, you should pick a lovely colourful palette. In addition to that, you can also ask your tattoo artist to add flowers to the tattoo to make it more beautiful.

The ending of season 2 of ‘The Mandalorian’ broke everybody’s heart and stunned them simultaneously. After all, nobody could have expected the massive surprise that the showrunners had in store in the form of a young Luke Skywalker! The beloved character played by actor Mark Hamill made a cameo in the season finale to save everyone from the enemies. He also took Grogu with him for proper education. Therefore, if you are a huge fan of Luke Skywalker, you can also get a cute tattoo of him and Grogu together.

If you are a huge geek who loves everything Sci-Fi, then you must also be a fan of ‘Star Wars’. Consequently, if you are looking for an amazing and cute tattoo that will express your love for the ‘Star Wars’ universe – then go ahead and choose the most adorable Grogu tattoo you can find!