10 Best Grizzly Bear Tattoo Ideas You Have To See To Believe! 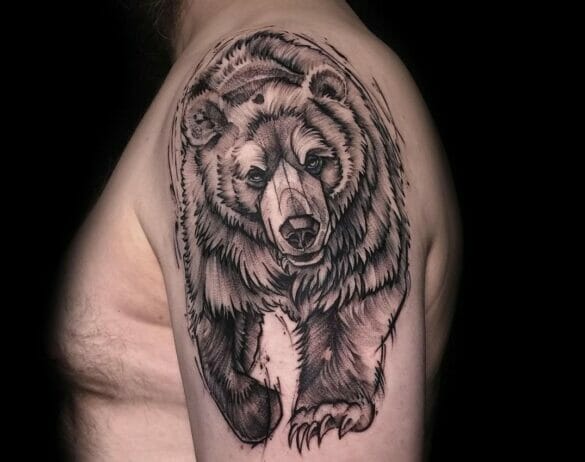 Are you looking for grizzly bear tattoo designs that reflect your strength?

Then you have come to the right place! Grizzly bear tattoos are quite common, whether it is a single body part, such as the bear’s  paw, or the entire bear in all its glory or the terrain it is native to. Even a calm and serene grizzly bear tattoo has its own sense of majesty and significance.

We explore the traditional grizzly bear tattoo all the way to more modern interpretations of bear tattoos and the meaning. Bear tattoos, from pandas to polar bears, are associated with many different qualities observed in the wild. The most common ones being protection, strength, confidence, power, bravery, spirituality, resurrection, and aggression. Bears are considered to be traditional symbols of these qualities in many cultures across the world, from Biblical to Native American.

Grizzly bears are native to North America and are one of the largest territorial mammals on the planet. They are, by nature, aggressively protective of what they deem to be theirs. Their prominence has made them intrinsically tied with Native American cultures in the past as well as the present. It may also interest you to know that in the North American culture, grizzly bears have always represented skilled hunting and strength. A grizzly bear is also considered a spirit animal, known to guide warriors to the afterlife.

Here is a list of recent grizzly bear tattoo designs from some of the best tattoo artists for your inspiration!

This style of art has a more traditional turn to it. These kinds of bear tattoos where the teeth are bared are particularly aggressive. The aggressiveness of the grizzly bear head tattoo is balanced with the colorful flower inked at the bottom of this arm tattoo.

These kinds of grizzly bear tattoo designs speak of strength and a solid inner spirit. The counterbalance of the flower acts as a reminder that not all power is as ferocious as a bear. These kinds of bear tattoos further represent a fierce protective nature.

This bear tattoo can also be incorporated into more significant pieces! Upper arm sleeves, chest pieces, etcetera are all valid placements for these types of bear tattoos.

Check out some teddy bear tattoos or panda-inspired bear tattoos for a completely different vibe! However, polar bear tattoos are a good substitute for the grizzly bear; after all, they are apex predators.

The realistic art style of this bear tattoo makes it look like the bear is ready to pounce on you! The bear’s claws are a prominent part of this bear tattoos’ ink design and style. Along with the exposed teeth, these features make the bear look even more ferocious. If you want to match the detail on the bear’s fur and coat as shown in the image here, it’s best to consult an experienced tattoo artist.

These realistic bear tattoos are well suited to symbolize and represent a fierce protective inner spirit, power, and strength. And this also brings to life a lot of the sentiments surrounding the warrior spirits of Native American cultures.

There are several more traditional art styles that you can use to create the best bear tattoo for you! Cultures from around the world have their own beliefs surrounding the significance of bears. This includes Celtic religions and several Native American tribes. Tribal grizzly bear tattoos will often put emphasis on different parts of the animals, like on bear paws or the bear claws, to represent other ideas.

This absolutely stunning kind of bear tattoo uses the silhouette outline of bears and then fills it in with stunning landscapes. The kind of landscape you use combined with the bear can be used to mean many things.

The tattoo depicts the terrain to which the grizzly bear is native, by starting with a forest at the bottom, then gradually merging with a mountain range and the skies. From bottom to top, the ink style becomes more subtle and minimalist.

This hand tattoo showcases a mixture of old-school art styles with newer more realistic ones. The concentration on the bears’ face and the scarring given to it signify a strong person who has gone through significant conflict and come out of it stronger than ever before.

This tattoo captures the protectiveness, and aggressiveness associated with grizzly bears to the tee. With sharp incisors and hollow eyes, this tattoo is sure to impress and intimidate at the same time.

This hyper-realistic bear with its claws and teeth ready to attack create the picture of a bear ready to fight. The detail of the art is gorgeous and this is completely and utterly terrifying.

Despite being on a narrow body part, like the arm, the detail on the tattoo makes it look enormous and intense. In the background, you can see a dense forest, showing the bear’s native habitat. With its sharp, focused eyes, this bear tattoo is anything but subtle.

If you are looking for a tattoo that looks badass and showcases your inner fierceness and strength, then you will love to have this inked on your body.

With a mixture of modern abstract art and old school realism, this well-composed and contrasting bear head tattoo is striking to say the least! The bear head is split down the middle with a realistic sketch on one side and geometric shapes on the other.

The tattoo could represent someone who has evolved to change with the times while keeping  their core values and conviction intact. Stunning bear tattoos like this one can depict many facets of your evolving life and your core values of protection.

This small grizzly bear tattoo follows a realistic style. Instead of focusing on just the head or the claws, this bear tattoo shows off the whole animal. The bear appears to be taking a leisurely stroll in the forest and is not particularly aggressive, though its eyes are prominent.

These kinds of bears are more strongly associated with inner strength and protectiveness rather than the more showy fierceness and temper that is often associated with bears. You can sport this tattoo on any body part, like the arm or calf muscles. The smaller size of this tattoo also allows it to be easily included in larger pieces. This bear would also go well with teddy bear tattoos or panda bears!

This grizzly bear tattoo style is truly creative! The real-life encounter of the client is aptly depicted here. The artistic bear with its aggressive expression and the tranquil landscape housed in its silhouette make for a unique bear tattoo. It’s fascinating to see how a single tattoo can have so many elements and convey so much!

The meaning for these bears would be those of protectiveness felt towards homesteads or for what you would consider being home. This can be mixed with different bears to create more meaningful and larger pieces, everything from teddy bears for nostalgia to panda bears for healing can be used by you. These tattoos can be placed on your arm and leg for an elaborate representation, or even on your wrist like a symbol of strength and power.

This adorable grizzly bear head has a very unique twist. All the bear’s features are simply outlined with black ink, while the hearts scattered all over are filled in. Combined with the bared teeth, this makes for an interesting and unique tattoo, unlike others we have seen so far.

This art style shows us that the grizzly bear would not be out of place amongst other cute tattoos and can fit right in with polar bear tattoos or even teddy bear tattoos. The size also ensures that you can include it into sleeves or other larger tattoo collages with relative ease.

You can also look for bear claws or bear paws as the main piece of the tattoo rather than concentrating on their heads or body. This will allow you to have a more low-key statement piece while using many of the meanings associated with the strength and power of bears.

If you are looking for a true strength tattoo that you can suggest to your tattoo artist, you may also check: