10 Best Grimes Tattoo Ideas That Will Blow Your Mind! 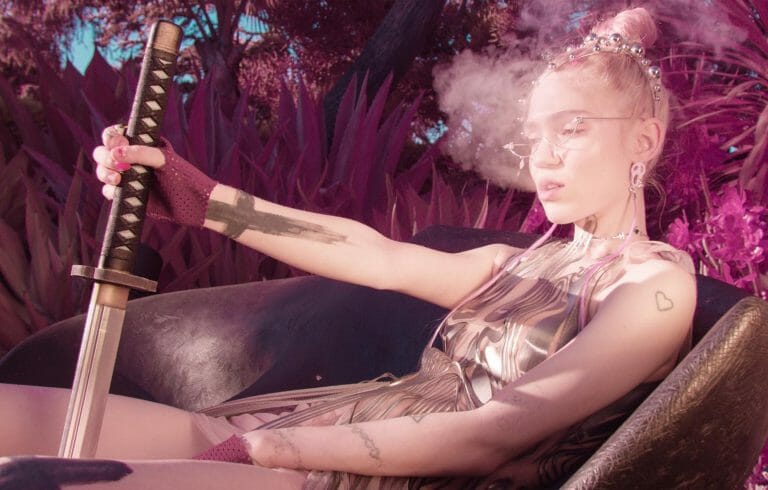 Looking for some interesting Grimes tattoos, you have landed on the right page. We have some fantastic Grimes tattoo ideas for you!

Grimes has never been the one to shy away from showing off beautiful tattoos on her body.

Claire Elise Boucher is a professional musician and songwriter from Canada. She’s famous for singing in genres like dream pop, RnB, hip hop, and electronic. Some of her most popular albums include ‘Halflaxa’, ‘Geidi Primes’, ‘Art Angels’, and ‘Oblivion’.

From the tattoos on her body, it is very clear that primes has a very unique fascination with aliens. So much so that she has decided to move to Mars when she turns 50 years old. On social media, she had explained that she is making a long slow effort to have a full alien body that is totally covered in white ink. She started making such tattoos in April 2021, when she got an extra-terrestrial design made in white ink on her back. This tattoo was made by tattoo artist ‘Tweakt’, and designed by artist Nusi Quero who is said to have an ‘Alien Computer Brain’. She has several tattoos inspired by the ‘Lord of the Rings’ and ‘the Legend of Zelda’ on her body, and she continues her quest of getting more and more tattoos on herself till she covered in alien scars or designs.

Check out these amazing Grimes tattoos and select your next body art!

Although Grimes has several unique tattoos on her body, she also has some simple designs. One such design is the universal symbol of love, heart. It is a simple tattoo made in black ink. She must have got this tattoo in honor of her love towards Tesla CEO, Elon Musk and their child ‘X Æ A-XII’.

One of the very visible tattoos that Grimes got was on her finger. She got it sometime around November 2016. The tattoo is of a geometric design made with black ink, and it covers the entire middle finger. The shapes appear to be concentric shield shapes. The design was made by her trusted tattoo artist Delphine Noiztoy. The meaning behind this design is unclear, however, it looks very cool. There are some other black in designs on her index finger and little finger. The meanings behind those designs are also unclear. Maybe it is a step towards her journey of covering her body with alien tattoos. If you are looking for some cool and trendy designs, this tattoo is the one for you!

On her left palm Grimes has a tattoo of the word ‘beautiful’. Although there are several other tattoos on her left palm, but this tattoo stands out. An interesting fact about this tattoo is that all of them have been done at home either by her or by her friends. Other tattoos on her left hand include the number 8, a Chevron Line, an alien head and a chain on her wrist. This tattoo is a constant reminder for her to feel beautiful no matter what the circumstances are. In her Instagram posts revealed that although those tattoos were done imperfectly, they feel very special and like home to her.

This design was completed in black ink and is spread all across the back of her left hand. This is a beautiful design and if you are looking for a tattoo that radiates constant positivity, this design is for you!

Grimes has a full back tattoo totally covered in white ink which was made in April 2021. This new ink of hers gained a lot of attention when she posted a picture of the same on her instagram account. The Grimes new tattoo is a step towards her long slow effort of covering her full body with beautiful alien scars and making it look ‘post human’. She had said that this design is an armor for her that will not only affect her decisions, but also protect her in ways unknown to her.

Unlike her other tattoos, this design is made in white ink and spread on her entire back. She got this tattoo after the birth of her son, X Æ A-XII.

Around March 2017 Grimes got a variety of mysterious symbols on her left palm. This tattoo was made by tattoo artist Grace Neutral. According to some experts, the tattoo on her middle finger is the alchemy symbol for planet Jupiter. This tattoo is a representation of learning and thinking. The other symbols have not yet been uncovered by the experts. Some say that these are custom designs which Grimes got to fulfil her dream of an ‘Alien Body’. The sign at the bottom of a palm resembles the letter I, which was written in old Irish Ogham. The exact meanings, however, remain unknown.

This tattoo was gotten by Grimes on the inside of her left palm, and it is made entirely in black. The tattoo artist has used thin strokes to make this design. Since this tattoo appears to be a simple one, it could have been completed in one sitting.

Grimes got this tattoo, which appears to be of a huge brush strokes on her left leg. This tattoo was made by tattoo artist Delphine Noiztoy, who is based in London. The design appears to have the words ‘тихо’ which in Russian means ‘quiet’. This tattoo starts from her knee and spreads to her ankle and the words are written in large brushstroke style. According to her Instagram post, this tattoo was gotten in January 2017 in Los Angeles. The name of the tattoo parlor was ‘LoveLetters’.

This tattoo is a courageous and beautiful decision, and if you are inspired by Grimes you can customize this design and write your own words in similar font.

Grimes has another brush stroke tattoo on her right forearm. She got this tattoo in December 2015. This design is also made by tattoo artist Delphine Noiztoy. Delphine is a tattoo artist who is known for specialising in realism, black ink work. Grimes revealed this tattoo on her Instagram post and said that the brush strokes represent her inner artist. Grimes wanted this tattoo so that it always looks like she has been painting and making a mess. Some experts believe that this design is a redesign of her cross tattoo, which is much smaller.

This tattoo has been made entirely in black ink and must have taken one sitting to complete. It is placed on the rest where it is constantly visible and is one of the lesser painful areas.

While growing up, Grimes was close to her brothers and the first video game that they every played together was ‘The Legend of Zelda’. That is also the first ever video game they got. She and her brothers have a matching Triforce symbol on them. Grimes got it on her left forearm, right below her elbow. This is also one of the first tattoos that she got. This tattoo is made entirely in black ink and holds special meaning to the artist.

Hana, who is Grimes’ friend and collaborator, got matching tattoos with her. Both of them have tattoos related to the Lord of the Rings. It is written in the Elvish language used in the books and movies. This particular tattoo was made by Delphine Noiztoy at Hana’s house in 2018. The index finger, little finger and the ring finger on her left hand have the words, ‘Contradiction’, ‘Be ready for war’ and ‘No shields allowed’. In combination to that, her friend Hana got the quote ‘And all turns to silver glass’ that was used by Gandalf. All of these tattoos are written in elvish language.

If you are looking for some matching tattoos with your friends, these designs are the ones to go for.

If you are fascinated with aliens or have a personality similar to Grimes? Then these tattoo designs must be appealing to you. Some of these designs are small and simple designs and will make the human body look like it’s full of beautiful alien scars. If you are a fan of crimes, then you can also get tattoos of her album covers on you. However, if you are looking to explorer further, you can definitely look at the tattoos below –