10 Best Grim Reaper Tattoo Ideas You Have To See To Believe! 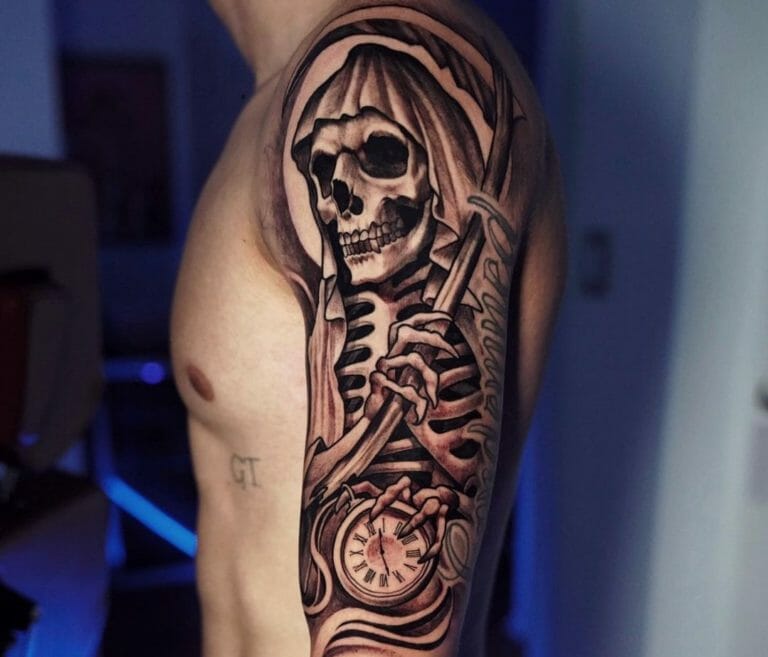 If you believe in death omens and the afterlife, then this list of grim reaper tattoos are definitely for you.

The grim reaper is said to represent death.

According to many legends and cultures, the grim reaper appears on the deathbed of a mortal. It is the last entity you witness before descending into the afterlife.

Grim reapers are generally shown as human skeletons wearing a long black cloak and holding a scythe in one hand. The razor-sharp scythe is said to be used to separate the body of the mortal from their soul. The reaper then accompanies the human soul to its final resting place, Heaven or Hell wherever it has been destined.

Some of the most pertaining questions surrounding the reaper are regarding its origin and true meaning. What does a grim reaper tattoo mean? Regarding the origin of the reaper, different theories in various cultures exist and each has its own version regarding how it came into existence. Some theorists believe that the reaper has evolved from the legend surrounding the Greek god Cronus who was the youngest of the first generation of Titans, the pre-Olympian gods. He was the son of Gaea, the primordial Greek deity of Mother Earth, and the primal Greek god of the sky, Uranus. According to the legends, Cronus usurped his father’s kingdom and ruled during the mythological Golden Age, only to be overthrown by his own son Zeus. Cronus is usually shown in the myths as a mythical being walking around with a scythe in his hand with which he had castrated his own father, Uranus.

Other mythological experts hold the belief that the reaper’s origin is hidden within the Greek legends of Kharon who served as the ferryman of the king of the underworld and the ancient Greek god of death, Hades. Kharon ferries the souls of the humans, who have recently died and had been buried, across Styx, the river that separates the mortal world from that of the dead.

But perhaps the most infamous origin story of the reaper is the one that originated in 14th century Europe. The continent was hit by a deadly plague that wiped out almost a third of Europe’s population and with rampant death hitting all households, people turned to the mythical reaper as the imagery of foreboding death.

This scary but realistic grim reaper tattoo sleeve is a fierce-looking tattoo design that is meant to garner attention whenever you enter a room. The creepy and foreboding grim reaper has been depicted in a classic manner with the usage of dark coloured ink shades solely. The detailing and shading of the skeleton face wrapped in a black cloak lend a horrific look to the grim reaper tattoo. These grim reaper tattoo sleeve designs can be a cool addition to your arsenal of tattoo designs but we will advise you to go for this tattoo only if you are an experienced tattoo enthusiast. The large size and complex shading will require a lot of time, money and commitment on your side as well as an experienced tattoo artist to be executed perfectly.

The grim reaper traditional tattoo portrays a skeleton wearing a long, black hood and holding a scythe in one hand. Since the grim reaper is associated with death, it is depicted in the classic dark shades of black and grey. Most of the people opting for this classic symbol of death are the ones who have eluded death in some manner or share traumatised pasts. It has become a testimony of how they have ‘cheated’ the inevitable in a way and can also symbolise the bravery with which they continue to struggle trauma and yet not give up and let death win. Thus, even while the grim reaper usually represents death and fear, it can also become a symbol of your courage and relentless attitude towards life.

The grim reaper has been conceptualised as holding a lot of things, apart from the scythe, from time to time – from a card, candle to an hourglass. But possibly one of the most horrifying designs is the one where the reaper is throwing a pair of dice. It is not only the dark shades of the cloak, the hooded skull, or the slim skeleton hands but what these designs actually represent – no matter how lucky you are but death is inevitable. The pair of dice embodies sheer human luck, while the grim reaper symbolises forthcoming death. Hence, this grim reaper tattoo is a creepy and fearful contrast of luck and death itself, and how death will inevitably come for even the luckiest of us who somehow have managed to ‘cheat’ death once or twice in life.

This grim reaper hand tattoo holding a lantern is another juxtaposition of delicious contradictions in a death tattoo. The artist signifies through this reaper tattoo that how darkness and light go hand in hand in life (and the afterlife). The lantern is a symbol of light, enlightenment, and life itself, of the courage and desire to find the right path in life or of searching for light in the darkness. The black and grey grim reaper on the other hand is an ominous presence that embodies the end of life and absolute darkness in itself. Thus the interesting contrast of these grim reaper tattoo designs leaves it open for various meanings – one of the scariest conceptions being that the grim reaper is leading souls to their final destination by shining the light of the lantern on their path. Ge this dark and scary but cool tattoo if you are a goth fan or want to flaunt an unusual design in general.

The tattoo artists have been pondering for a long time over one question – how do we make the already dreadful grim reaper tattoos more fearful? Then one brilliant tattoo artist came up with this amazing fiery grim reaper tattoo design to put the thought to rest once and for all. According to the faith of Christianity, the evil mortal souls are made to suffer in various levels of Hell according to the severity of their wrongdoings. In John Milton’s epic poem ‘Paradise Lost’, we read about how an everlasting fire burns in Hell where the sinners are forced to make their penance. This grim reaper, clothed in a robe of burning fire, seems to have a lot of fun while ferrying the deceased souls to their destination as it knows what they have in store for them.

Out of all the grim reaper tattoos on this list, this specific tattoo design is our favourite as it is an unparalleled piece of modern art. While in almost all the tattoo designs, the grim reaper has a skull under its black robe, this particular reaper is faceless with pairs of exposed ribs and a clawed hand pointing towards Heaven. The absence of the scythe and the strange geometrical design in the background that looks like an occult symbol adds to the mystery of this tattoo design. This grim reaper has the appearance of the dementors found in the ‘Harry Potter’ franchise. Just like the reaper, the dementors were also omens of death that sucked the life out of their hapless victims. This cool crossover lends a certain pop culture reference to the mythical grim reaper and is an absolute must-have for all goth tattoo enthusiasts or Harry Potter fans.

While legends and myths usually represent the reaper as a skeleton wearing a black robe and holding a scythe, it does not mean that we can get behind any other type of reapers. Instead of the quintessential foreboding figure, this reaper tattoo design is given a fresh pop culture twist by replacing the skeleton with an adorable pokemon cartoon. Charmander or Hitokage, as it is known in Japan, is one of the cutest pokemon in the very popular and widely acclaimed cartoon series. Charmander not only diminishes all the intimidating features of the grim reaper but also makes it a lovable and delightful tattoo design to possess for all ‘Pokemon’ fans.

The black hooded skeleton figure of the grim reaper is enough to arise fear in the heart of anybody. The scary ominous mythical being spends all its life ferrying the newly deceased human soul to the underworld. But surely it deserves a vacation just like the rest of us? The tattoo artist community thus decided to give a fresh twist to the menacing grim reaper by giving it a cool vacation look – the grim reaper wearing a beach shirt and holding a coffee cup in its hand. The reaper’s scary skeleton face seems like is smiling even in this grim reaper tattoo design, thus lending an unusual and offbeat to the whole design. This tattoo would be an amazing addition to your to-do list of tattoo designs and a welcome relief to all mortals with the messenger of death on vacation.

Most of the grim reaper tattoos on this list demand a lot of time, skin space, an experienced tattoo artist, and a huge budget owing to their explicit large sizes and complex designs. We know this can be a bit too intimidating for first-timers (apart from the already intimidating subject matter). Well if you are such a person, fret not for we have you covered with these minimalistic grim reaper tattoos that will require not much of any of the aforementioned things but will still lend you a neat style and look. The tiny and simple hooded grim reaper is seen here petting an animal which gives a particular wholesomeness to the otherwise scary figure. Another cool feature of this minimalistic grim reaper tattoo is that it can be done anywhere on your body – from the shoulder, the back of your neck to on your elbow.

As we have already mentioned, not all reaper tattoos need to be dark and ominous. Some can be playful and fun too, like this grim reaper and unicorn tattoo design. The unicorn tattoo is a representation of divinity, innocence, and chastity. The unicorn also signifies femininity and hence this unicorn and grim reaper tattoo can be ideal for women looking to get inked. The reaper is an omen of evil and bad things to come, while the unicorn resembles all the positivity in life. Hence, this piece of art can be quite an interesting choice for getting inked and will catch anyone’s eye the moment you walk into a room sporting this tattoo.

For most people, the Grim Reaper is solely a representation of death. But Grim Reaper tattoos can take altogether a whole new meaning depending on the style and design of the tattoo and expertise of the tattoo artists as well as the elements included in the design. While this specially curated list tries to cover all types of grim reaper body art, it is surely not exhaustive. Some other types of grim reaper tattoos you can give a try are –