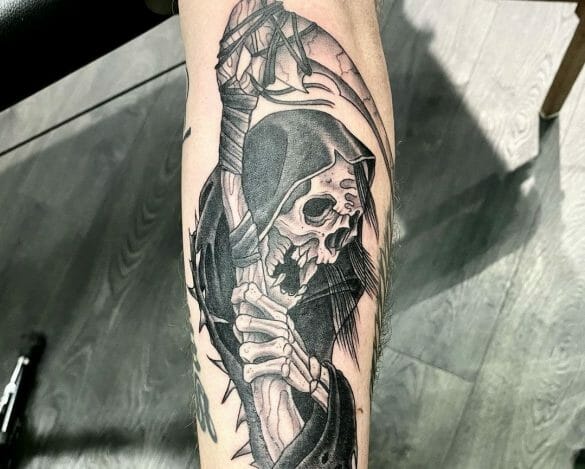 Are you obsessed with the idea of Halloween and everything creepy? Then check these grim reaper tattoos for your next tattoo inspiration!

A Grim Reaper tattoo can be sported both by men and women.

Grim Reaper tattoos often are taken as a symbol for the cycle of life and death. Usually, translated as where things must follow their natural course.

A Grim Reaper represents death as a simple concept. The one designated to help the deceased souls make their way to heaven once their time is done here. Usually, Grim Reapers are taken to be someone evil, because of the difficult task they have to carry out. Although, they are simply part of the natural order. Hence, whether the Grim Reaper tattoo is an unlucky tattoo to get inked or not completely depends on the perspective. In fact, in many cultures, the Grim Reaper also conveys the idea of good luck or bravery. In our opinion, getting a reaper tattoo on hand will only make the hand look awesome.

If you are tired of the usual scary grim reaper tattoos, this one might catch your fancy. To make the tattoo look adorable, the grim reaper on this one is reimagined in the Chibi style. The grim reaper and a unicorn might be an odd combination in any other universe, but not for this tattoo.

Pushing aside the usual dark and dreary look associated with the grim reaper, they are shown here to joyfully ride a unicorn, even with a smile on their face. The little nose of the skull is inked in a heart shape, winning our hearts. Pretty eyelashes and some pink blush make this grim reaper a much more friendly figure than what we are used to. To have some spark of the unicorn, the scythe in the tattoo has a neon blue highlight, making it look like anything but doom. Vibrant colours are used for the hair of the unicorn, making the tattoo pop.

This grim reaper tattoo is for all the Halloween lovers out there. Since one month of Halloween is too short, why not carry a crumb of it always on your arm? Instead of the usual skeleton for the figure of the grim reaper, the tattoo artist uses a frog covered in the black hooded robe. The frog is seen sitting relaxed on top of a mushroom holding a razor-sharp scythe. While the shade of the pumpkins for jack-o-lantern are kept intact, mushrooms are used in place of pumpkins. Why do you ask? Well because frogs are typically seen with mushrooms. In the background, little red bats, and a shimmering golden moon can be seen. The picture is complete with dark clouds. Last but not the least, how can we not mention the sassy quote? It fits like a glove with the picture.

The artist has done a great job at getting all the colours to perfection. Because of the use of different hues, and shading, this tattoo demands hours of inking. Hence, if you want this, we suggest you book your appointment beforehand.

The tarot card tattooed on the arm here is commonly known as Death(XIII). While the name may be so, the card does not represent death. Major changes in someone’s life is depicted with the help of this Tarot card. As a tattoo, it can signify any life-changing event, or be a reminder for a new and fresh start. Since snakes are also associated with transformation and rebirth, here, it indicates the afterlife.

With just a simple play of black and grey, all the details of this tattoo design come to life. The Grim Reaper is, of course, the focal point of this tattoo and the card. The skeleton is made realistic with the help of highlighting around the neck bones and shading on the skull. The image of this Grim Reaper surely instils fear in our minds which is normally associated with the idea of death. It reminds us of the entity that is in charge of any and every human soul.

This grim reaper tattoo makes us think it is from an alternate dimension, but no, it is simply space-themed. This one can be a good option for skin art tattoo designs. The typical black cloak has been kept aside, as we see an outburst of neon colours. The hooded cloak has a bright pink-purple hue. The skull itself, along with the scythe does not bear its original shades, having a neon blue in place. The teeth shine grotesquely with gold. The tattooing techniques used for this one remind us of the old-school comic book style.

The grim reaper holds an hourglass in their hand. The hourglass is a symbolism used to indicate that time is always running out, so each soul should make the best of their time while they can. You will need a really good tattoo artist who is very experienced with shading and colours for this reaper tattoo.

At first glance, it might not be easy to notice the symbol of the deadman’s hand in the tattoo. Although with a closer look at the number of cards the Grim Reaper is holding, it becomes hard to ignore. If you know anything about poker, you know the dark humour the quote conveys. Since Wild Bill got shot with that hand of cards, it drives the point home, almost making us imagine Death looming near him as he sat with his hand.

The scarlet colour of blood used to accentuate the reaper tattoo does a great job of making the tattoo stand out against the dark colours. Even though the sockets are hollow, the tattoo looks as though the grim reaper is preparing directly into the cards, and waiting for the opportunity to bring down the scythe. Since this is a comparatively small-sized tattoo, you can ask your artist to even tattoo it on your wrist, or any other little spot.

It is hard to take our eyes off of this extremely realistic Grim Reaper. This is one of those grim reaper tattoo designs which can be tweaked in many different ways. If you have always wanted to have your favourite character dressed as the Grim Reaper or wanted to have your face as one, this will be a great idea to put into action. The face divided into two is what makes the image even more creepy. Even with the use of a simple grayscale, the tattoo is brought to life using great detail in the facial features.

The face is covered with a black cloak with a sinister smile. Since the grim reaper is tattooed on the wrist, it will have a 3D effect on many features. It is quite obvious, you will need to find the best tattooist, to make sure the face of the grim reaper looks lifelike, just like the one in the tattoo, staring into the soul.

The grim reaper on this tattoo is made to look like a zombie, with broken teeth and a green body. As commonly known in most cultures, this reminds us of the reaper making their rounds around the world with that scythe, wearing the same cloak, claiming one person after the other when they die. The hourglass with blood-red sand inside reminds of the cycle of life, and how things must come to an end once the time is over. We love the little detail of bandages on the overused dented scythe.

The deft use of colours makes this tattoo a piece of art. This is made possible, since the ink used, is known to be very smooth on the skin. It is also organic and vegan friendly. From the highlight on the broken skull to the one on the glass, no detail is spared.

This tattoo design subverts the idea of the Grim Reaper as part of the underworld. While the usual black robe is in place, this grim reaper is dressed in the manner of a Church priest. Along with the robe and clerical collar, the rosary makes the imagery complete. The skull is depicted to look hollow with a haggard expression, devoid of any vitality.

Contrary to the grim reaper, the background is in sharp contrast. Vibrant flowers in different hues are chosen, usually associated with liveliness and vivacity. This tattoo can work as a half sleeve tattoo, covering the lower arm from the elbow down to the wrist. All you need now is the money and the time to get inked.

This tattoo maintains the perfect balance between cool and cute. The head of the tattoo along with the body is that of a ram. The tattoo can be thought of as the child version of Grim Reaper, before the years of toil. Also, it can even indicate the devil himself, with the hooves and horns. Since Devil is supposed to rule Hell, the imagery becomes stronger. Here, the grim reaper is shown sitting in a seductive posture with a pout, holding a well-sharpened scythe.

Traditional colours of black and red are mainly used for this piece. Even the eyes are the colour and style of the typical ram. The interesting part about this tattoo is, it blends in with the skin. Hence, much less ink is used than one would need to colour the entire figure So, the skin is pricked fewer times.

This tattoo reminds us why Grim Reapers instil fear throughout various cultures. The grim reaper in the tattoo design seems to be violently flying towards their target. It tells how nobody can escape the clutches of death no matter how hard they try. The victims are countless, as blood is seen dripping from the scythe, as the grim reaper chases down the next person in line.

The detail of the night light falling on the cloak is emphasised with the help of a yellow highlight. An otherworldly glow is given to the hollow sockets on the skull. The dread for this grim reaper is slightly reduced because of the cartoon-like image. This piece can be completed with a single appointment if you plan wisely.

Grim Reapers necessarily do not have to be scary. You can get creative with the concept, and even change the protagonist to resemble a different character. So, do you think Grim Reaper is widely misunderstood or are they evil?

Before we put the nail on the grim reaper tattoos, a few more amazing tattoos deserve a mention: