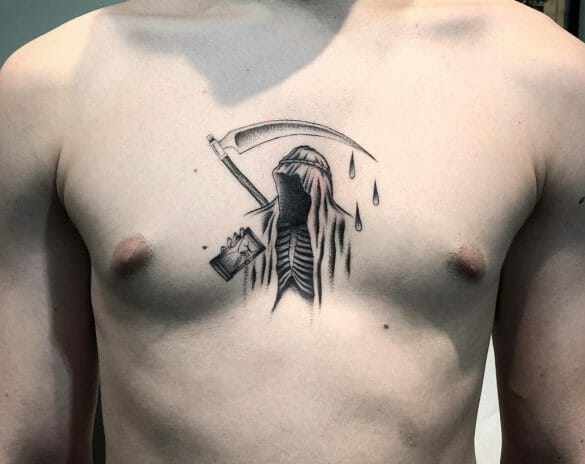 Looking for a unique tattoo that has everyone’s attention? Here are some grim reaper chest tattoo ideas for you!

Grim Reaper, a personification of death, a skeleton with a cloak holding a huge weapon, a scythe, is an iconic character part of several mythologies and cultures.

The Grim Reaper is often identified donning a black rope with its face covered in a hood. It is believed that using its weapon, the Reaper breaks off the soul’s every right to live on in the human body and provides a safe passage into the afterlife.

The hooded figure is often associated with evil or something dark because of the colour and how it looks, but that is false. Legend has it, the Grim Reaper appears merely to collect the souls of the dead or those who are on the verge of it and makes it easier for them to move on. According to many cultures, beliefs and mythologies, the Grim Reaper often guides the soul to heaven or hell. However, according to Greek Mythology, the father of Zeus and the kind of the Titans, Chronos, was a God of harvest and carries a long scythe which is the weapon of the Reaper.

This kind of tattoo is appealing but bold, not a common choice for everyone. It is for people who love gothic styles and who has experienced anything related to death in their life. Many assume that this stylized tattoo is for men only, but it actually quite popular among men and women alike.

Here is a list of some of the best Grim Reaper Tattoo ideas curated just for you!

This is one of the best and cleaned Grim Reaper tattoos that you will find. This tattoo of the robed figure is a bold choice as it is placed right in the centre of the chest. Usually, people get this tattoo to show that they truly accept death as a part of life. This cool Grim Reaper tattoo also represents fearlessness. It is a great symbol for you if you are adventurous and like taking risks in everyday life, even if it involved death.

This tattoo shows the Reaper standing with its hands folded as a welcoming sign while holding the scythe. The mix of black and grey shades blend perfectly in the skin tone of the wearer. The skull of the Reaper is placed right in the centre of the chest and the eye sockets are made completely black. This design rarely comes with bright colours because the Reaper is associated with mourning and death.

Grim Reaper With Wings And Roses

The Grim Reaper, often known as the angel of death is not frequently portrayed with large wings spread across. Although, it is possible to show wings emerging from the cloak because according to legend, the Reaper has twelve wings. This type of tattoo is seen as a representation of humanity and the fact that you accept your fate as a mortal. The wings make the Reaper look divine and less scary.

Rose on the other hand is seen as the highest symbol of love and passion. Throughout the centuries, people have associated this flower with innocence, love or a symbol of remembering a loved one.

This tattoo can have different meanings for different people. However, it could be a sign of you losing someone you love dearly and want the reaper to show them the way to heaven. This tattoo is not made in the traditional black and grey colours, the artist has added some bright colours like yellow and red to the mix. On top of the tattoo, there are the words “keep your hopes up high and head down low” which means that you should not be afraid of achieving height but always remember to be humble. This tattoo inspiration could be great for your next design!

The Reaper And The Cerberus

This is one of the most different and best grim reaper tattoos for you. This design is of the Reaper on the left holding a scythe and a long chain to which a Cerberus is bound.

According to Greek Mythology, a Cerberus is a three-headed dog that guards the entrance of the underworld. Its heads stand for the past, present and future. Although it is a dog, it is mostly associated with negative aspects of life.

This tattoo clearly shows that the Reaper is trying to hold the dog and use the scythe to free its soul like it would for a human. This could be a representation of you wanting to be free from your life and start afresh. This tattoo is made in black and great shades and the detailing of this design is what brings it to life.

The Grim Reaper And The Lantern

The lantern is an item that according to legends, the reaper carries is to navigate through the darkness of the underworld and lead the souls to their destinations.

The scythe in the hand of the Reaper is to sever any connections the souls may have to their mortal life. This is an easy way towards the afterlife. The Grim Reaper has been portrayed in many cartoons and movies. This tattoo is made on the left side of the chest of the wearer with the traditional black and grey ink. The robes of the reaper have a little “Halloween” feel to them to show the dark side. A bold choice, but an awesome design for your next tattoo!

This is a very cool Grim Reaper tattoo design. Apart from the Reaper, it has a few more elements that are related to the dark side, or death, like, a snake, a bat and of course the Grim Reaper.

The Reaper is placed on the right side of the chest. It represents the “circle of life” which means that if death comes to you, you are not the victim, in fact, this is something that happens to everyone and eventually, each person will have to face it at some point in their life. This is a symbol to embrace death and not be feared by it. Therefore, it can also represent bravery and courage.

The Grim Reaper holding the scythe is made in black and grey ink that blends perfectly with the skin.

This is again a traditional Grim Reaper tattoo with different elements like the hourglass.

The hourglass symbolizes that the end of your life is near or the rest of the time is leading up to your death. This tattoo is a reminder of the concept of death and its inevitability. Symbols like these remind one to live life to the fullest and fulfil all their dreams while they can because time is running short.

The Grim Reaper, it is said only appears when your mortal life is towards the end and it’s time for you to move towards your afterlife. The strokes in black and shades of grey make this tattoo look outstanding. The teeth in the mouth area look so realistic with the strokes and shading. The hourglass and the Reaper are a great combination. The words, “Memento Mori” mean “remember you must die”. A beautiful representation of the end of your mortal life.

This is a unique tattoo design of the Grim Reaper. Although, a very simplistic design, the meaning behind it is a deep and dark story of death. The Reaper appears when it has to snatch a soul of a mortal and guide them through the afterlife.

Rarely do you see tattoos of the Reaper that are colorful, usually, they are strokes of black and shades of grey. However, this tattoo is made in full jet black ink. The detailing of the hands, the skull and the scythe are clearly visible. The teeth are also very clearly drawn. This tattoo does not need to be on a particular skin type, it can be worn by anyone who fancies dark tattoos. This design is made on the left side of the chest. You can also customise the scythe according to your choices by adding more blades or adding some background structure like fire or trees. You can customise this tattoo according to your taste.

This is a traditional Grim Reaper tattoo design with a unique twist. You must notice that each design shows the Reaper carrying a scythe in its skeleton hands to sever the connections a soul can have to its mortal life. The scythe plays a very important role.

In this design, the Reaper is carrying a scythe, but the handle of the weapon is not a wooden one, like others, it is a gun/rifle. Not everybody can think of a design like this. It seems like this was inked on a soldier’s chest as a tribute to their guns that plays an important role in their lives. This could also be a tribute to a friend or a loved one who was courageous and brave or even a soldier.

This design is made in black and grey ink. It looks like one hand of the Reaper is in a fist and the other is holding the rifle scythe. The detailing on the skull is amazing. The tattoo also has the words, ” Live by the gun, die by the gun” showing the wearers passion for guns. You can customise this tattoo by adding elements of your choice and making this tattoo personal to you.

The Reaper And The Rose

A beautiful design that is the representation of death and mourning.

A black rose is one of the most common symbols of mourning. It could also be a tribute to a loved one or a farewell to them like you are parting with them.

The Reaper in this design has an open mouth as though it were laughing or smiling. This design is different from the others because it does not show the usual scythe in the Reapers hands. But we know that this is the Grim Reaper because of the hood on the skull. This tattoo could mean that you have lost a loved one and want the Reaper to guide them through the afterlife. A beautiful and thoughtful tattoo design.

The Grim Reaper And The Scythe Tattoo

A fancy Grim Reaper tattoo design that shows a hooded skull and skeleton hands holding a scythe. But the unique twist in this design is that the other hand of the Reaper is holding a lit matchstick. This is also similar to the lantern design. The fire from the matchsticks helps the Reaper navigate through the underworld and guide the soul to their destination.

The tattoo includes the words, “may the bridges burn, light my way”, which means some bridges and relationships are never meant to be rebuilt. The burning bridge will lead you away from the situations that you want never want to be again.

Here are some other designs that will grab your attention –

These designs can be a bold choice for someone who is getting a tattoo for the first time. But these designs have a deep and beautiful thought behind them and can be personalized in any way you want. So why wait, go get your next tattoo now!