101 Best Grenade Tattoo Ideas You Have To See To Believe! 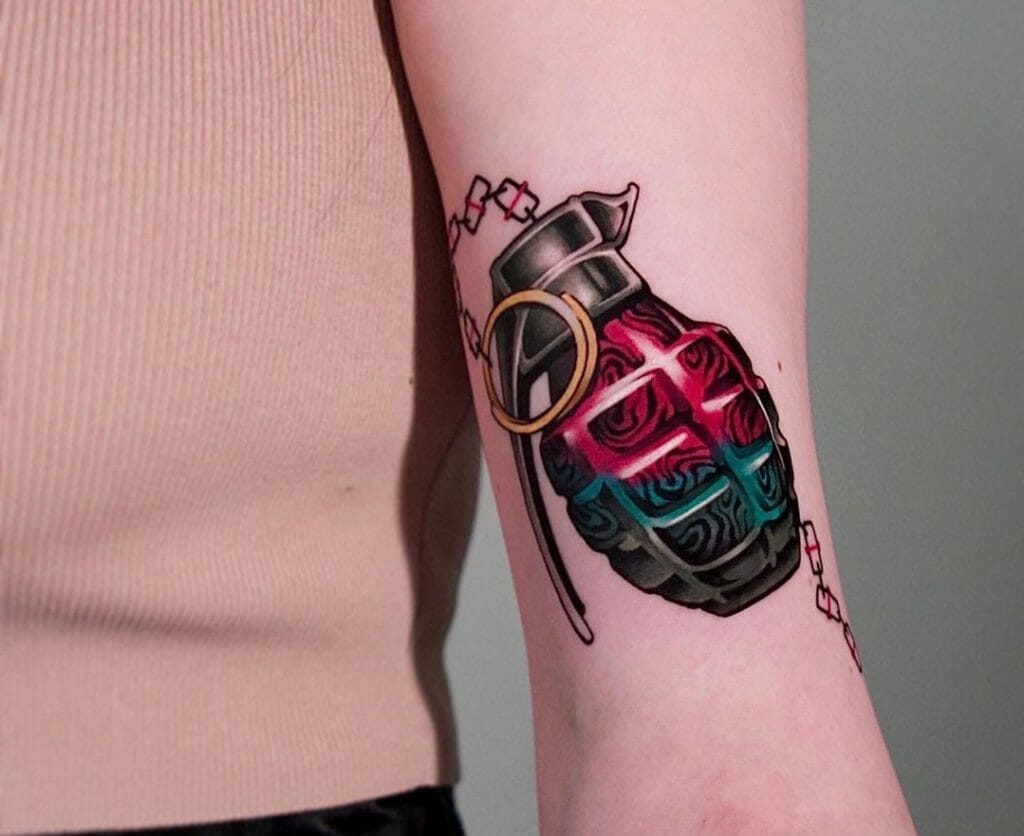 Getting a grenade inked on your body can be a bold expression of your beliefs and personality. If you are looking for grenade tattoo ideas, look no further. Find the latest designs and photos in this article!

The first image that comes to mind when thinking about grenades is military explosions or wars.

What does a grenade tattoo mean? It could mean caution for some or a sign of life and death. A grenade tattoo could imply one has served in the military, has an affinity for weapons, or a unique, personal meaning.

The device has been used in war or combat-like situations since the 15th century. It was just a string of rope acting as a fuse attached to a tin can filled with rocks and gunpowder. Over time grenade tattoo designs have been modified and modernized, and we all remember the pineapple-shaped grenade, which gained popularity through movies. The grooves made in these pineapple-shaped grenades allowed soldiers to grip it better, making it easier to throw them. The explosive device is an excellent piece of imagery and symbolism that translates into great grenade tattoo designs. Military personnel are frequently seen sporting a grenade hand tattoo. It symbolizes that the person has seen war or has been in combat. This tattoo can also represent for the customer the loss of a beloved to war. Many styles have evolved in grenades like a cartoon one, angel-winged grenade, pineapple grenade, heart grenade, and others.

A heart grenade tattoo design could be the best way to represent that you lost a loved one to war primarily via a grenade attack. It is one of the designs to make your love for the weapon or military lifestyle evident. Grenades have a pin that, when pulled, results in a huge explosion. Likewise, a person with a grenade tattoo may want to say that they are a sensitive soul, and once you pull the pin, their heart may explode, similar to emotions bursting when tampered with. The best place to make this grenade heart tattoo on your body could be on the chest or arms, depending on the tattoo’s size. Having it on your arm could symbolize that you carry your heart on your sleeves.

Like the heart-shaped grenade tattoo, a brain-shaped grenade tattoo design could also hold personal significance for you. It could be your way of telling the world that you survived despite the pressure. It could be that your brain didn’t explode even when you were tested. It could also be in memory of a loved one you lost due to a brain-related disease or accident. Inking this could mean that new ideas explode when you use your brain or create a new world. The placement of this tattoo could be on your neck or forearms, as you would like the world to see the kind of person you are.

This grenade tattoo design combines two very popular and loved tattoo ideas. The grenade and the skull symbolize good and evil or the positive and negative aspects of life. The skull also represents life and death like the grenade. The human skull is the last part of the body to decay, and it symbolizes consciousness, intellect, and our temporary existence. The combination of these two motifs announce to the world that you are not scared of death. It is an excellent piece of art for a risk-taker who lives life on their terms. Add the pin, and it may also say that you are short-tempered or have a short fuse.

This is one of the tattoo designs that are most popular with military personnel. It best represents the military profession and the dangers that come with it. Deep down, such tattoo designs can say a lot for someone who is living such a dangerous life. In 2021, we have seen many variations of the grenade design, but many still prefer the traditional motif. This could be an excellent idea for someone who has lost family in the war but is a civilian. The common perception is that they could be a very strong or evil person to get a tattoo of something destructive. But like we cannot judge a book by its cover, we cannot say what deep meaning the tattoo may hold for them. If you prefer simplicity in design and some mystery around your reason for choosing the grenade, this could be the best choice.

The dove holding a grenade is the logo for the American band ‘Hollywood Undead’ which is known for playing rap-rock. The band was formed in 2005 in Los Angeles and came up with their first album three years later. Their trademark and the principal emblem is a dove holding a grenade which is like a paradox. The dove is always considered a symbol of peace and hope, while the grenades think of war and destruction. This symbolism has worked well with their fans, and many have inked the same on their skin too. The above tattoo in white ink makes it look more exciting and well-thought.

Grenade Tattoo With A Twist

In this tattoo, grenade and flowers together in a vase symbolise a ray of hope arising through a troubling phase of life. It is also symbolic for people who lost a loved one to a grenade attack or during the war. The tattoo could depict a military person who lost a fellow soldier to an attack, maybe having saved other soldiers in the process. The flowers represent the impact a soldier or lost loved one has had on others and the legacy they have left behind. In the year 2021, when we have all endured so much through this pandemic, it could mean for someone to live through these tumultuous times and still have a positive outlook on life, like the flowers here. This is an excellent piece of art for someone who believes in himself, the higher power and a brighter tomorrow.

Simple, clean artwork can be more interesting than an artistically done piece. It also says a lot about the person’s likes. If you like clean, clear messaging or lines, then a detailed design of a hand grenade may be just right for your taste. When you get inked, you live with it for the rest of your life, so you have to be very clear about the choice you make. This type of design which is straightforward and well done, can give greater satisfaction to you. This tattoo of a hand grenade is often sported on arms or the calf muscles to help make it prominent. This hand grenade design works beautifully if you want to show an explosion at the back.

The French word for grenade is spelt the same as the English one, and it means pomegranate, as the bomb is reminiscent of the many-seeded fruit in size and shape. However, instead of the gunpowder and shrapnel, you could represent it with flowers, symbolizing love and happiness. So when you pull the pin, there will be an explosion of flowers. This tattoo uses a popular idea, like the grenade, and contrasts it with natural elements, like flowers and leaves – symbolising the importance of peace and growth compared to the violence and destruction resulting from war. It is a fantastic combination of two conflicting ideas to represent a larger meaning.

Pin Of A Grenade

As they say, God lies in the details. You can see that this image has a smiley instead of the conventional pin. This small change says a lot about the person. The popular grenade art could represent an explosion of love for the person who pulled the plug. This common design could also say that the person is fighting to keep his or her issues all to themselves while they are waiting to explode. This is an excellent representation of every common person who is free and likes to be in control. This common tattoo design with a deep meaning can be used on the forearm or at the back of your calf too.

Grenade Tattoo For A Cover-Up

Grenade tattoos can be an excellent idea for a coverup tattoo as it has an evident pattern and grading that can be used to cover an older tattoo with an unwanted meaning that you have grown out of. We all make mistakes and get tattoos without giving it much thought and may live to regret the decision. This way, you can cover old tattoos with a well-thought-out piece and design of your choice. A cover should always be more significant and more profound than the previous artwork so that it is not visible. This is where new grenade tattoos emerge as the most popular idea.

Looking for more designs? You may also look for:

What is a grenade tattoo?

A grenade tattoo is a type of tattoo featuring an image of a hand grenade. These tattoos can range from realistic looking designs to more creative takes on the classic symbol, and they often represent strength, power and courage. They are also sometimes interpreted as symbols of defiance, rebellion or survival in the face of adversity. Whatever your interpretation, grenade tattoos are sure to make a bold statement.

What are the different designs of grenade tattoos?

How did the grenade tattoo become popular?

The grenade tattoo has become increasingly popular in recent years, especially among people who are seeking to express their strength and courage. It has become a symbol of defiance and rebellion against oppressive forces, an expression of solidarity with those facing danger or difficulty. The design is also often associated with the military and veterans, as it’s seen as a symbol of strength and survival. Whatever the reason, grenade tattoos are a powerful way to express yourself.

How much does a grenade tattoo cost?

The cost of a grenade tattoo can vary greatly depending on the size, complexity, and colors in the design. Generally speaking, prices for small or simple designs start at around $50-$100, while larger and more intricate tattoos can be upwards of several hundred dollars. Prices will also vary from artist to artist, so it’s always best to get quotes from multiple tattoo parlors before making a final decision.