101 Best Greek Goddess Tattoo Ideas That Will Blow Your Mind! 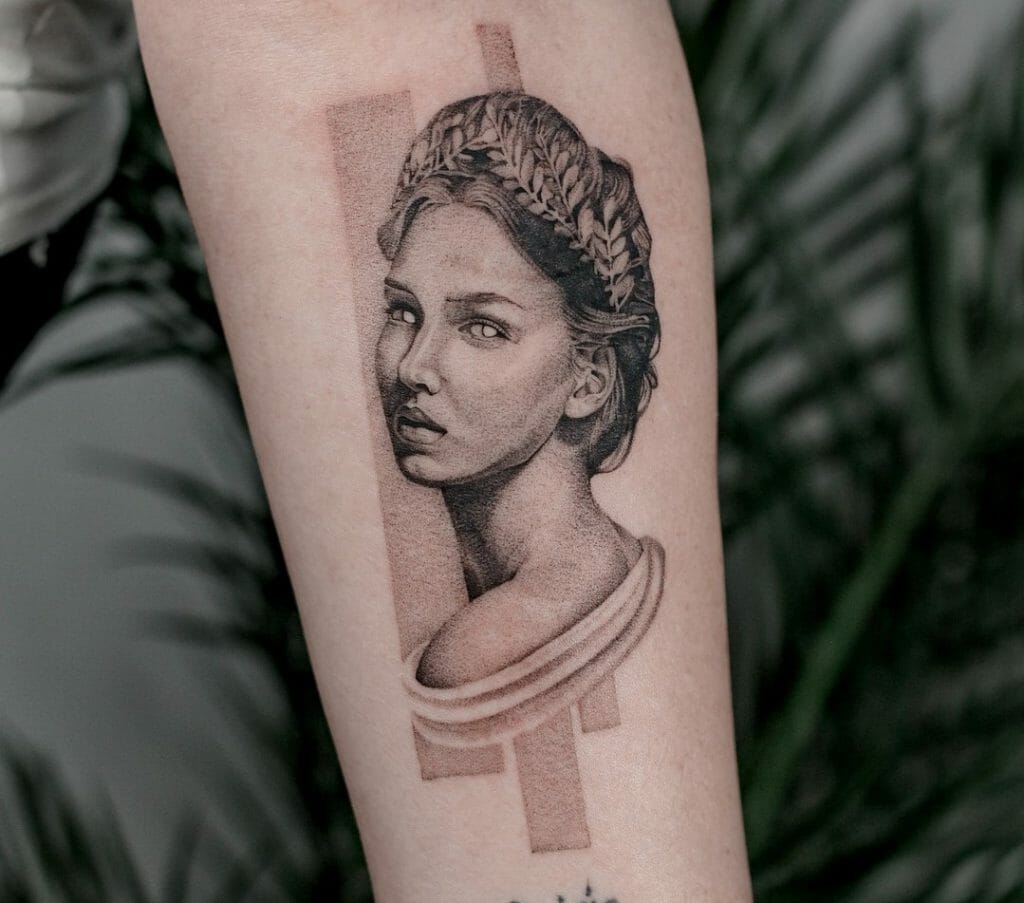 Are you looking for a Greek goddess tattoo? Continue reading to find out some of the best Greek mythology tattoos to get yourself inked with!

They all have interesting stories that keep us interested. All ancient Greek Gods and Goddesses oversee different human issues.

We regard them as having human features and feelings with which we may identify. They are sometimes nice and just, and sometimes brutal and unjust. This paradox is what makes legendary Greek personalities so intriguing to study. Many people all throughout the world are fascinated with Greek mythology. Greek Goddesses are not inferior to Gods. You can never go wrong with Greek mythological tattoos.

The powers and abilities of the ancient Greek Gods vary. They also have authority over several areas of nature and human existence. The most amusing aspect of these Gods is their proclivity toward folly. They are more human in nature, with human emotions and behaviors. If you are a fan of Greek history, you may already be aware of it. But there is something more exciting than Greek culture and Greek gods and goddesses; it is looking for unique tattoo ideas of them to ink on your body. You can never go wrong with Greek mythology tattoo designs, as ancient Greek mythology is one of the best sources for awesome and cool tattoo designs. There are multiple different designs such as Athena tattoos, centaur tattoos, apollo tattoos, Aphrodite tattoos, or even medusa tattoos; it all comes to your favorite God from ancient Greece and how you do plan it with your tattoo artist. Check out the list below to find out some of the best Greek goddess tattoos!

The ancient Greeks used to worship Artemis as the Goddess of hunting and mythological feral creatures, greenery, virginity, and childbirth. Artemis was the daughter of Zeus, who was the King of Heaven, and Leto, who was a female Titan. Artemis is also the Greek God Apollo’s sister. Artemis was the most popular deity among ancient Greece’s local population. She was a great Goddess with a lot of power, and if you like Artemis, this greek tattoo design is for you. It includes not just Artemis but also her emblem, the arrows. It also includes the moon, which is another Artemis sign. You can include many other Greek symbols to represent the ancient God; these include lightning bolts, black moons, and skies. The tattoo is done in white ink and black ink, and you can get greek tribal tattoos like these inked as a sleeve tattoo, back tattoo or shoulder tattoo.

You can never go wrong with a greek goddess Athena tattoo. Athena stood as the God of Wisdom and War in ancient Greece; she was a great force. She was also the goddess of Athens, the ancient Greek city that is currently Greece’s capital. As a Goddess of battle, she was also connected with peace and needlework, which was rather paradoxical. The spear was thought to be her preferred weapon throughout Greek Mythology. She, like Aphrodite, is one of the most significant Greek mythological goddesses and dwelt on Mount Olympus with other major Gods and Goddesses. You can include many other Athena symbols in this ancient Greek tattoo design, and you can ask your tattoo artist to include an ancient greek word or tattoos of greek creatures. Athena greek goddess tattoo looks the best when done as shoulder tattoos or portrait tattoos on legs or chest.

Hestia stood as the virgin Goddess of family, homes, domestic life, the state, and, most significantly, the Greek God of Hearth in Greece’s ancient culture. Hestia is also a sister of Hera, Zeus, Poseidon, Demeter, and Hades, as well as the daughter of Cronus and Rhea. This greek god tattoo design depicts her holding a bowl full of flames, implying that she is the Goddess of the Hearth and keeps all fires burning. She is a cherished Goddess, and the tattoo design wonderfully depicts her. The black and grey bring out the most in the skin’s intricacies. You may also have additional Greek God tattoos in a similar style; simply discuss your options with your tattoo artist. A greek mythology tattoo like this makes a perfect combination with greek letters tattoo. You can also add an aphrodite greek goddess tattoo or Persephone Greek goddess tattoo into this ancient greek tattoo design if you are looking to create a big sleeve.

If you are into Greek mythological tattoos, you’ll love this exquisite artwork of the Goddess Hecate done in black lines. Hecate was the Goddess of sorcery, witchcraft, ghosts, the Moon, necromancy, and the night. If you like Hecate and her evil business, you’ll enjoy this Greek mythology tattoo of her. Tattoos of Greek mythology which showcase Hecate usually depict her with a serpent or venomous snakes beneath the moon, as well as two additional identities on either side of her. To make the tattoo more fascinating, use some Greek symbols. A portrait-style tattoo like this is usually done in black ink; however, you can make changes to the inking color according to your preferences.

The ancient God, Gaia, stood as the Goddess of the Earth in Greek mythology. She was the originator of all life. Her name can also be spelled ‘Gaea.’ Since she’s the embodiment of Earth, all of her human incarnations are frequently pictured holding the Earth in her arms. Gaia’s incredible tattoo depicts her holding the globe in her palms. This tattoo has some incredible intricacies. You may have this tattoo on either your arm or your chest. If you are looking for greek goddess tattoo ideas, you should definitely check out Gaia tattoos that represent the best of Greek mythological tattoos. These styles of Greek mythology tattoos can include a greek goddess Siren tattoo, Hera Greek goddess tattoo or Aphrodite Greek goddess tattoo into their design.

Persephone is the peak of Greek mythology tattoos; she serves as the perfect Greek god tattoo design.

Persephone was thought to be the daughter of the Goddess Demeter and Zeus in Greek mythology. Her spouse Hades, the Greek God of the Underworld, is also identified with her. Persephone is thought to bring the Spring season with her when she returns from the underworld for a few months. She is frequently spotted with her spouse Hades. This tattoo perfectly reflects the beauty of Persephone and everything she is linked with. It combines parts of her Spring Goddess and Queen of the Underworld selves. You can integrate this tattoo design with other greek god tattoos, such as Zeus tattoos or Poseidon tattoos. Greek goddess Persephone tattoo can look great on your arm, chest or leg.

Hera served as the Queen of the Olympian gods, and she was the wife of Zeus, who was the King of the Gods, in ancient Greece. Hera was also the Goddess of marriage and women’s life. She was mostly revered as the queen of heaven, but she was also a tremendously powerful goddess. She is still one of the most well-known Greek deities. This greek god tattoo design is done in black ink yet has a lot of depth and intricacies. If you like Greek God tattoos, this is the tattoo for you. In this simple tattoo design, you can include a Zeus tattoo or a half horse and half man tattoo design. The entire piece is done in black ink.

In Greek mythology, Nike stands as the Goddess of Victory. Nike is the daughter of the gigantic Pallas and the River Styx. This Nike tattoo depicts her headless statue with lovely wings and a forceful appearance. If you appreciate tattoos of Greek sculptures, this is the greek w tattoo for you. Tattoos of her insignia, which include wings, gold shoes, and wreaths, are also available. The beauty of this tattoo design is unspeakable and mixed with a Zeus tattoo or Poseidon tattoo; it can look incredible.

In Greek mythology, Nyx is the Goddess or embodiment of Night. This Greek god tattoo design of her profile is great because, despite its modest size, it has amazing intricacies and completely reflects her personality. If you enjoy tattoos on your shoulder or arm, you can have a crescent moon as her sign on your shoulder. It’s a more subtle method of expressing your feelings for Nyx.

Women can look lovely with little tattoos. Tiny ink appeals because it appears tidy and delicate. Although you will be limited in the Medusa tattoo design you pick since you cannot go for anything incredibly intricate, these little pieces are less expensive and take less time to finish. Medusa tattoo meaning is deep, and it’s one of the best choices for greek tattoo designs.

Several other suggestions for a similar structure can be given such as:

What is the meaning of a Greek goddess tattoo?

A Greek goddess tattoo typically symbolizes strength, beauty, wisdom, and femininity. It may also be used to represent a connection to ancient mythology or the divine feminine power of the Goddess within. The particular meaning of a Greek goddess tattoo depends on which deity is chosen and how it is incorporated into the design. Popular gods and goddesses include Aphrodite, Athena, Artemis, Demeter and Hera. These symbols can be used to express a connection to the divine feminine or any aspect of Greek culture. Additionally, some may choose to get a tattoo that features multiple deities as a way of expressing their reverence for all gods and goddesses. Ultimately, a Greek goddess tattoo is an expression of personal spirituality and identity.

What are some popular Greek goddesses to tattoo?

Popular Greek goddesses to tattoo include Aphrodite, Athena, Artemis, Demeter and Hera. Each of these deities represents a different aspect of femininity, from love and beauty (Aphrodite) to wisdom and justice (Athena) to fertility (Demeter). Tattoos featuring any of these gods or goddesses can be used to express a deep respect for the divine feminine and Greek culture. Additionally, some may choose to honor multiple gods and goddesses in one tattoo design in order to highlight their reverence for all aspects of the divine feminine. Ultimately, choosing which Greek goddess or goddesses to represent is a very personal decision that should reflect an individual’s beliefs and values.

How much will my Greek goddess tattoo cost?

The cost of a Greek goddess tattoo will depend on many factors, including the size and complexity of the design, the skill level of the artist, and other customizations. Generally speaking, larger tattoos tend to cost more than smaller ones. Additionally, some artists may charge extra for intricate detailing or special techniques such as color-shading or line