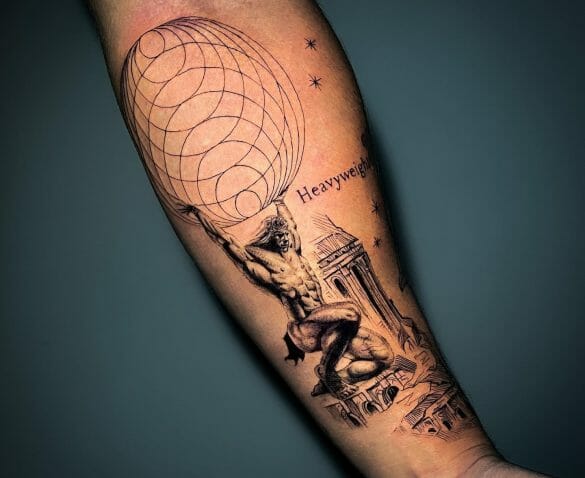 If Greek mythology is your love and forte, then the Greek god tattoo sleeve is the best option to flaunt the superior Greek culture.

Many of us have a leaning toward different folklores and legends and mythology play a great part in that gamut of things.

One such branch of mythology is Greek mythology which tells the tales of the origin, activities, and the lives of the Greek deities, heroes, and mythological creatures. The tales of Greek mythology like others were firstly passed on by oral poetic tradition believed to be by 18th-century singers Minoan and Mycenaean.

The accounts of Homer which is the Iliad and Odyssey were believed to be the first written accounts. Now if you are mesmerized by these tales of war and love, commitment and betrayal, religion and politics the best way to make them part of you is by getting the Greek mythology tattoos.

One of the most popular Greek God tattoos is the Zeus tattoo who was the king of all other Gods and the Goddesses. Regarded as the god of thunder, sky, and lightning these tattoos are mostly done in black ink. The sleeve Zeus tattoos can be done with other Gods in the background to show the superiority of this father figure and has become the symbolism of power.

In ancient Greek mythology and in other cultures it was believed that Zeus could transform into other people or animals and seduced and fathered several demigods. This particular trait makes these tattoos a symbol of virility and masculinity and they are mostly found inked among men. Zeus’s head along with thunder and lightning bolts is one of the most demanded tattoo designs around the world.

Popular mostly among men in Roman stories he is known as Pluton or the wealthy one and punishes the evil soul and grants gifts to the worthy one. It is mostly done by people who are of stern and pitiless nature like Hades himself and symbolizes the acceptance of the vulnerability of life and its new beginning. Another symbol with which this Greek god tattoo can be etched is a three-headed dog named Cerberus.

Athena tattoos are one of the coolest tattoo ideas to get inked with but you must be worthy of it. These tattoos are not for the weak-willed as Athena was considered to be the goddess of wisdom, courage, warfare, justice, skills, and crafts. These ancient Greek tattoos can be either done in black or red ink and sometimes the designs are fused with an olive tree and owl.

Both popular among men and women, Athena was born from the forehead of Zeus and even defeated Poseidon. A fearsome warrior and strategist and also the helper of heroes like Jason, Heracles, and Perseus, the one who owns this tattoo must have made a great journey in life with ups and downs but has never given up.

In Greek mythology, Hermes is the son of Zeus who was made Messenger of gods by his father. In all the realms he is the quickest among the gods and was a trickster who used to steal the arrows of Artemis, or the trident of Poseidon. Either black or vibrant color is used to get this tattoo done.

Considered to be one of the sacred twelve Olympians, Hermes tattoos are done both by men and women and are believed to be the harbinger of good luck. The wings of Hermes symbolize freedom and can also be done by a person who has a restless soul and wants to fly high without any worries.

With his symbolic Spartan look wearing armor, helmet, and carrying a shield and spear Ares is known as the God of War. In Greek mythology, he was so feared that it was believed he could single-handedly turn tides on the battlefield. Ares was mostly accompanied by his sister Eris and his sons Deimos and Phobos.

The Spartans were the only ones to worship Ares and there was also a temple in his name in Sparta. This ancient god tattoo is not for cowardly people and is done by people who would not be scared of a fight. Symbolic of bloodshed, war, and violence it is better not to pick a fight with someone who is the owner of Ares tattoo.

Extremely popular among women and a symbol of feminine power Aphrodite tattoos are recently in great demand according to several tattoo artists. The ink color used is mostly black and the perfect place of choice are upper sleeves, lower sleeves, and forearm. The body of the Goddess is ornamented with shells or roses and is mostly done as a nude or semi-nude figure.

According to Greek mythology, Aphrodite is the daughter of Zeus and the goddess of love, beauty, and fertility. These traits make this Greek god tattoo a demonstration of female strength and procreation. A wearer of this Greek god sleeve tattoo can represent a multitude of meanings from being a great lover to a proud woman.

A Greek warrior, the protagonist in Holmer’s Iliad, and a legend in Greek mythology Achilles is one of the participants of the famous Trojan War. The son of Peleus and Thetis, he was an immortal warrior as he was thrust into the river Stripe by his heels which became his only weak spot and the reason for his death. Now, this ancient Greek tattoo blossoms well in the sleeves when inked with black.

Extremely popular among men this tattoo design can have contrasting meanings and depends solely on the wearer. Considered to be the mourning hero it can be inked as a representation of vulnerability, grief, and misery. Sometimes the Achilles tattoos can also be done in portrait style with a sword and shield demonstrating power, courage, bravery, strength, and patience.

Greek history tells that in ancient Greece the sky, underworld, and the sea were divided among Zeus, Hades, and Poseidon. Poseidon became the god of the sea, horses, and earthquake and created Medusa, Pegasus, and Minotaur. Mostly done in black and white ink with intricate details the Poseidon tattoos are quite similar to his eldest son Triton but must not be confused with it.

Dressed in a robe with a wavy beard and a crown the most striking feature of this Greek gods’ tattoo is the trident on its hand. The entire piece reflects power, strength, and bravery, and highlights these characteristics of the owner of the tattoo. It can be also done by someone who is a lover of the sea and marine life.

Easily recognized for its venomous snakes on the head in place of hair the Medusa tattoo is creepy yet mesmerizing. Once a Goddess who was hard to resist was turned into a monster and her single gaze would turn anyone into stone. This Greek mythology tattoo is known for its fine details and is considered to be quite hard to achieve by any tattoo artist.

Several ideas can be reflected in this tattoo which is both popular among men and women. It can be done by a person who is of complex nature and this tattoo will be a sign to stay clear of that person. It can also represent fertility as with her beheading was born the mighty Pegasus and Chrysador.

Son of Zeus and Leto, the Apollo tattoos are one of the coolest ancient Greek god tattoos popular all around the world. The ink choice is mostly black and the other symbols with which Apollo is ornated are a laurel crown, bow or arrow, or a lyre.

Considered to be the God of Music it is done by people who want to perfect their art form like Apollo. Interestingly it was Apollo who taught Orpheus to play the instrument and symbols of archery, poetry, dance, sun, and light are also associated with this Greek god.

If you follow closely then you will find great influences of Greek mythology in the culture, arts, and literature of Western civilization which holds a key position in building its heritage and language.

Other Greek mythology tattoos that can be considered are:

What is a greek god tattoo sleeve?

A Greek god tattoo sleeve is a type of tattoo that features gods and goddesses from ancient Greek mythology. It typically includes images of the most well-known deities, such as Zeus, Athena, Poseidon, Aphrodite and Hades. Often times these tattoos will feature symbols associated with the gods or scenes taken directly from classic mythological stories.

What are some tips for choosing a design for my greek god tattoo sleeve?

When deciding on a design for your Greek god tattoo sleeve, you should consider the symbolism and meaning of the gods. Depending on what you would like to represent, different gods may be better choices than others. For instance, if you wanted to express power and strength, Zeus might be a good choice. If you wanted something to represent beauty or balance, Aphrodite could be a great choice. Additionally, consider the size and placement of the tattoo; larger images may work better on wider areas like your back or arms, while smaller images can be placed more discretely. Finally, think about which colors to use; traditional black and gray may look classic and timeless, but brighter colors will make your tattoo stand out more.

What are some of the most popular greek god tattoo sleeves?

Some of the most popular Greek god tattoo sleeves include pictures of Zeus, Poseidon, and Athena. Other common designs feature images of Hades, Aphrodite and Apollo. Additionally, there are often other creatures or symbols associated with these gods that can also be included in a sleeve tattoo design like the thunderbolt of Zeus or Medusa’s head for Athena. Finally, some people choose to create a sleeve of all the gods from Greek mythology in one design.

Overall, when it comes to getting a Greek god tattoo sleeve, there are plenty of options and designs available. Consider what symbols and meanings you want to include in your tattoo before deciding on a final design that works for you.