101 Best Graveyard Tattoo Ideas You Have To See To Believe! 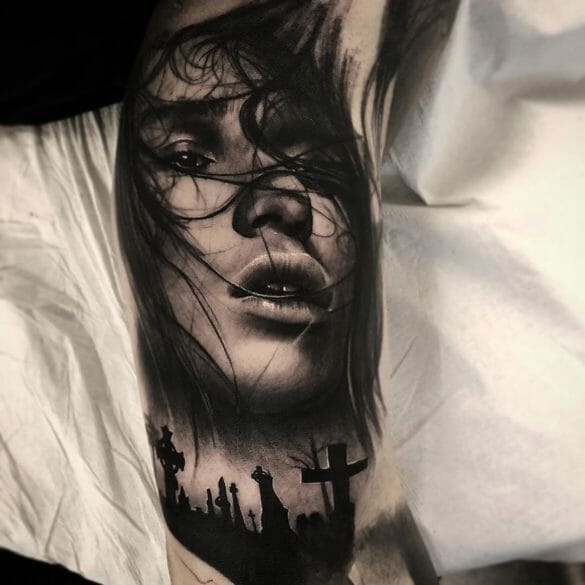 Here is your chance to explore some graveyard tattoo ideas inspired by deadly horror, goth art and other things that can chill your bones.

If you want a tattoo that’s unabashed, mind-blowing and even bears the potential to make people around you flinch, do not go for other ideas but that of a graveyard tattoo.

These tattoos come not only in various designs but provide an array of meanings portraying the different faces of a graveyard. A graveyard tattoo might signify death at the first glance but from the perspective of art, there are other representations to it as well.

In consideration to the element of spiritualism, the symbolism of graveyard tattoos depends on the belief and faith of an individual and not on the standard ideas. For some, it is a bad omen, for some a symbol of goth. Whereas some view graveyards to be scary and something to be avoided, while some find it fascinating.

Alongwith symbolising death quite literally, a tattoo of a graveyard sets forth diverse representations. In many cases, it can stand for a new life or death of the past and the start of a new beginning. Often times since a graveyard is feared, hence a graveyard tattoo can also imply how fearless one is, to inscribe something on their body that’s most feared. It can symbolise the last remnant of the people we lost or it can be based on the philosophy of the final stage of the holy life. Thereby it all depends on the artist in which light a graveyard tattoo is portrayed.

Here are some tattoo ideas that depict a graveyard in different shades and illustrations :

A skull shows the inevitability of the occurrence of death and the end of mortality. From the perspective of an artist, it represents transformation with a power that can be fearsome to most. And although a skull is the symbol of death and horror, it can also signify rebirth – death of old patterns thereby reminding us to live life nevertheless as life never stops, not even for the death of phases. Or it can also epitomize eternity as death is bound to occur. Some hold on to the counter belief too that the symbol of death can itself protect from dangers. One skull and innumerable possibilities, you see. Therefore a skull and a graveyard together in the form of a tattoo is not only the classic combination for all the fans of horror, dark spiritualism and gothic art and a stupendous idea for a graveyard forearm tattoo, but also a tattoo with a lot of relevance to it.

One of the most popular, imaginary figures in the world, the Grim Reaper is the ultimate face of Death. A skeleton with a dark cloak around, holding a scythe and often a lamp, this figure appears when our existence comes to an end. It is also a popular belief that the Grim Reaper was one of the major reasons for the outbreak of the Plague. Hence, just like the skull graveyard tattoo, a Grim Reaper is a classic addition to the spookiness of a graveyard that paints the picture of the end of something – may be a phase or maybe a mortal coil.

A haunted house with a graveyard is the epitome of spooky art and any artist will agree to it. But if one can read through the lines, a haunted house may also signify unaddressed emotions or an anxiety-inducing abode. Thus, if we include a graveyard tattoo design with a haunted house, together it embodies an experience of saying adieu to the repressed feelings and our deep seated miseries. As Livin’ Forgiven once sang ” My Heart Is Like a House “, this design is best suited as a graveyard chest tattoo especially since it is elaborative in structure. So it can be fairly concluded that apart from the spine-tingling horror factor, a Haunted house graveyard tattoo has more to it than we know.

Time to cancel the ideas of a graveyard being solely portrayed in gloomy black and white tones. A place with deep meanings and in reality, a ground for endings, there is nothing better than to use a bit of pop and colour to it for a subtle contrast.

Graveyard With An Eye

” Here’s looking at you, kid “, oh what better design to illustrate the epic dialogue than an eye on top of a graveyard with a sinister touch to it. Your deeds and misdeeds, your services and your wrongdoings, all being watched and taken into account before they are buried in the graveyard. Chilling, isn’t it? So if you are a sucker for gothic horror and unsettling art, ask your artist to make you this graveyard tattoo sleeve as soon as possible.

Tombstones must always feature the last words for the loved one gone away but there is still a way for improvisation in tombstone tattoos. Think of some favourite quotes you’ve read or find appropriate lyrics or things that can be added as a remembrance and add them to your personalized tombstone.

Graveyard Tattoo With A Portrait Face

Use a portrait face with the wild breeze playing with the hair, merged with a graveyard and there, you have the best work of goth art of 2021. A hundred stories die silent deaths in us, sometimes, fortunately, sometimes, unfortunately. And what better way to both mourn and celebrate that with perhaps a portrait face expressing an emotion deemed best for such graveyard tattoo designs?

Graveyard Tattoo With An Animal

Perhaps a spooky cat or a dog for warning services or maybe a daunting wolf or an eldritch bat with a graveyard, sounds alarming, doesn’t it? As fantastical as it can get, popular myths frequently suggest that certain animals around the scene are one of the first signs of haunting occurrences. But there are other ideas regarding animals besides a graveyard scene tattoo, too. It can also suggest the last memories of a dear pet or a pet cemetery where the animals finally rest in peace. So if you are an animal lover, you can customize this work of art as per your request.

Graveyard In A Heart Tattoo

Amidst all the intense graveyard tattoos, here is a fun one to lighten up the mood but with intricate symbolism to it.

Going back to the meaning of graveyard tattoos and attaching it to a colourful heart, it signifies all that is buried inside our hearts. This tattoo will not only bring some innocence to the brooding tattoo work but will also kindles a sense of humaneness to it.

Tick tock, tick tock, the time’s coming to an end! If read up, it can easily be deduced that time and graveyards work concurrently. As everything has a timeframe attached to it, so does death. Sometimes it means an end of the very existence and often times in popular culture, it can mean the end of phases in life and the importance of it. So a Graveyard with a clock tattoo is unique, bohemian yet meaningful.

A graveyard can outright signify death but there is always more to death than understood at the first glance. Concepts about death is not just restricted to endings but also can symbolise rebirth, like a phoenix.

There are some more ideas for graveyard tattoos which one can totally go for. Some of them are –

What is the meaning behind graveyard tattoos?

Graveyard tattoos are a type of body art that is used to honor, remember and commemorate the memories of those who have passed away. Graveyard tattoos usually feature objects such as tombstones, crosses, skulls and angels that represent mortality and remind the wearer of those they have lost. Some people also choose to use symbols from their faith or personal beliefs to further express the meaning behind their tattoo. Graveyard tattoos can also serve as a reminder to live life to the fullest and cherish every moment, while also acknowledging death as an inevitable part of life. By memorializing those who have passed away in this way, graveyard tattoos can be a powerful source of healing and help us find comfort in the memory of our loved ones. No matter what meaning or symbolism you choose to include, having a graveyard tattoo is a powerful way to honor and remember those who have gone before us.

What are some popular graveyard tattoo designs?

Popular graveyard tattoo designs often include elements of nature such as trees, flowers and birds. Images of tombstones, crosses and skulls are also popular choices for those looking to commemorate their loved ones. Symbols from different faiths, like the Star of David or Celtic Crosses, can also be used to create meaningful designs. Portraits of the deceased, or other meaningful images can also be incorporated into larger designs. Many people choose to combine these elements with words and phrases that express the meaning behind their tattoo. No matter what design you choose, a graveyard tattoo is an excellent way to honor and remember those who have passed away.

How much does a graveyard tattoo cost?

The cost of a graveyard tattoo will depend on the size, complexity and design you choose. Simple designs with small elements typically range from $50-$200 while larger or more intricate designs can cost up to $1000 or more. The artist’s experience level and geographic location may also impact the price. It is important to discuss pricing upfront before getting a tattoo so you understand the total cost of your chosen design.

What are some helpful tips when getting a graveyard tattoo?

When getting a graveyard tattoo, it is important to make sure that you are comfortable with the artist and their work before making any commitments. It is also important to be thoughtful about the design and symbolism you choose to ensure that your tattoo reflects the meaning behind it. Make sure to discuss any special requests you may have with the artist so they can incorporate them into the design. It is also important to take proper care of your new tattoo by keeping it clean and moisturized to promote healing and prevent infection. Following these tips will help ensure that you get the best results possible from your graveyard tattoo.